It was my intent to walk a course today, but after a quick jog during my warm up en route to the start, I decided to try running and stop if discomfort ensued. I ended up running the entire course, though with great restraint and caution. I estimate that my peak speed, even on roads and trails, stayed below 6:00/km. While it was frustrating to have such constraints, particularly on roads, downhills, and the cherished finish leg, I was delighted to be running at all. I noticed no discomfort during or after the race, and I was careful to take all landings from descents on my right leg.

My race was clean, but tentative. I was much less assured of my location and plan than last week, when I was walking. Nevertheless, even on a tricky middle control picking section (controls 5-9) in the middle of the course, I had acceptable plans and executions. I was devoting some of my concentration to heightened awareness of the state of my leg.

It has lately been dry - the marshes and ponds were almost nonexistent. The vegetation is quite thick in general, though the density of unpleasant plants like green briar is lower than in the Fells. Some parts of the map are very good, like the control picking area, but there are questionable regions, particularly the south western quarter near controls 2-4. The trails also seem outdated, which is unsurprising given the high use of the park. I was satisfied with the contours; the consensus from the people I talked to was that some significant updates, especially of trails, are necessary, but we don't need to build the map from scratch. It is unfortunate that the map standards vary, but I'm not certain how to fix that - perhaps a uniform update would help.

I unintentionally ran in glasses, an error I would have corrected had I awakened earlier. I rode with Lori, Presto, and Keith, and we had a pleasant lunch with Alex and Ed afterward at Texas Roadhouse.

I added about 900 rings to the chainmail. Apart from the right armpit, which I have been procrastinating, the tunic is complete from the top down to my lower ribs. It consists of about 8700 rings right now, and I will probably need another 3000 to finish it to my satisfaction.
Red - Splits 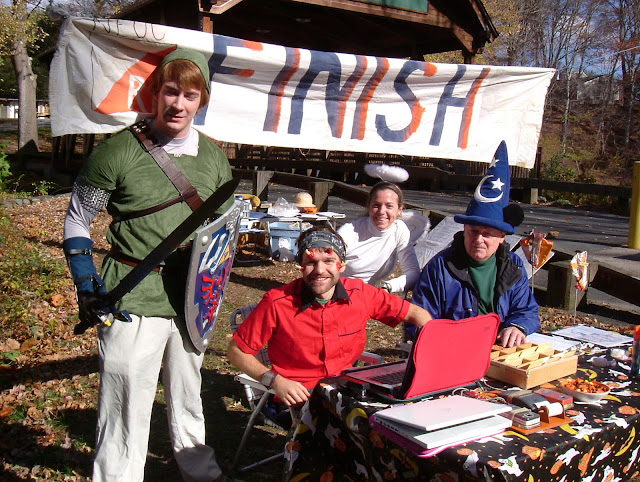 The session today was more involved than last week's, with some challenging hip exercises and positions. It would appear that my hips are inflexible compared to the population of my peers.

I took a break from work and did a mix of upper and lower body exercises.