Saturday: operative word was "hot". B minus run due to #8. Haven't seen splits but it felt like maybe a minute lost - do not have mastery of ISSOM symbols & certain significances, esp. as applies to campus/cities with large &/or complicated buildings as well as walls - where a cul-de-sac etc could cost critical time. On #8, ran more or less under the control! So a bit disappointed - about 2' behind PG, within a minute would have been of satisfaction. Distance a guess.

1 - ok but stairs/gray need more facile interpretation - don't know what gray indicates & no legend readily available - esp not at this picnic table at WPR where I'm writing. Maybe at start area earlier - but maybe for TT, ISSOM is familiar but there were a lot who would have benefited from this info.

4 - not sure of what feature was but could see control thru fence; spending extra seconds knowing what the feature is & where it is might very well save time - tend to run to feature in the center of the circle, not necessarily knowing what exactly it is - usually get away with it.

5 similar - ran to center of circle yet not knowing what I was looking for & where; in my case, control descriptions needed to have been more readily available (were on shorts at waist lvl, no shirt on)

8 - was not able to read map, potential for 3-dimensional situation/confusion

10 - had already driven thru the tunnel 2x looking for meet site, so could figure it out!

Right hamstring disgruntled at requests made of it

oops, pic omits top of tunnel - ran to its end, saw the light of day & wide open spaces (on a 1/4000 map) and thought "uh oh". Turned around and found a staircase before oblivion set in. Can see depression tic line on map but making the appropriate observations OOB in the heat is another process.

No FR route for some reason....

Dropped Beth off at WPR about 10:30 with plan of a 10 mi hike with O map. Went over a route, plan was to meet at XC center at 5p. Stopped at office before heading off to learn that shelter 6 was available. Was avail yesterday am but being a mile walk, I wasn't interested. After driving some 10 mi away on way to Liberty Corner, decided a license to park in WPR was worth something, called, but it was gone. Today it was available - last minute Memorial Day weekend camping is not likely, I was reminded. Last night's $108 room was fine but nowhere near as nice as this moment at a picnic table, breeze, sun, green & shelter waiting, located on O map.

Spent some 90' looking for meet locale @ SUNY Purchase! Arrived before signs, went to main campus. Asked a campus police officer who had no clue. Went to the admin police office, still no. Asked some students at a bus stop re wifi (campus quiet, between sessions). Even provided a password but no luck. Finally approached a group of 30+ visiting musicians (clueless) but they pointed out a woman who might be able to help. No wifi signal adjacent to the Performing Arts center but she took me to her office for a hardwired computer. Nearly 5' later we found the crucial words: "PhysEd building parking lot" and she provided a campus map. Some runners said there was a late-posted map but, interestingly enough, we did not see in our complete perusal (so I thought). An addition to the annals of finding the start triangle.

Under Father Time and too hot for a shirt 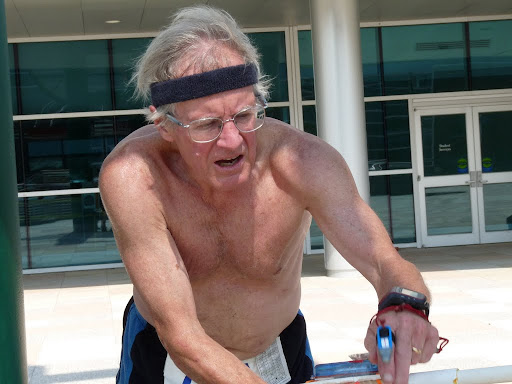 Mentally, warming up for the TT, not as in competing tho that should be fun - as in Harrison/Purchase, WPR/Rte 35/Katonah & Blue Mountain. The last was the site of an A meet back in November, 1980 - the month/year I bought RHODORA & brought her back from the Chesapeake, missing the meet. Back then, missing close-enough A meets was not something well tolerated. This was close enough that I drove there about a month later to run the courses (recall the ground being white). Also in those days, I owned GYPSY, a camping van and was able to sleep on the map without anyone disturbing me. Wonder if that is still possible on December nights...it might be.

WPR full for the weekend - as was Mountain Lakes! Que lastima! Went on to Liberty Corner for CBE memorial service at LCPC, 90F kind of day. Visited Harry Dunham park for dogs' cooling, Mocha found a "roll supreme" and stunk to high heaven, the latter in keeping with the message of the service. After service, spent an hour at English Farm, noting an end of an era ('66-present) as well as significance of grand and great-grand kids. Sorry to have left w/o taking a single photo. Then 287 to 87 to Newburgh as tent plans are the best laid plans of mice and men for the time being. No enthusiasm for hide-away in Harriman as once might have been the case. Could wifi peruse from the Days Inn parking lot and now inside a room. "No pets" allowed sign but they're quite at home & can be seen from here.

Room with a view

Good energy, hot! Singlet provided decent defense so did SW wind when
coming at me, shade-seeking as well.

Luti CW, got hot! Took off shirt which I've become more self-conscious about doing - in somewhat public setting - but better that than heat stroke.
5 PM

DP, fair-weather clouds, all's right with the World for the moment.

SPS SloGo wander after work, over just as rain started. Along rooty, rutted (and in a few places flooded) shore of Turkey Pond, voices on the languid waters turned out to be crew. Nice scents on the air.
7 AM

DP w/ Beth as well, made it to the slough. Warm, sun trying. Marvelled at the industrious ants - steady rain til wee hours but all the mounds were fresh.
7 PM

On watch at dusk

DP, shades of green and brown, accents of black all under gray overhead.
Generally dreary since BG, a week ago yesterday.

SPS trails & track (4x400 at 9' pace), figuring out what's up with hamstring. Not weak or painful, just sl. sore - and muttering something...? Am prone to some hypochondriasis but don't imagine things, either.
4 PM

at the TI, Beth there at same time, sit ups side by side.... Mostly stretching of hamstring. It's not happy but not rebelliously unhappy. Stretch, stretch.

Bought one variety of deer repellent on the way home - an organic version made of garlic, cinnamon, clove, white pepper, rosemary, thyme and peppermint. Keep away from my hostas or else...!
6 PM AM DP with Beth along. Was not done with red squirrels; just removed mama. Beth noted what had to be a baby at the bird feeder yesterday, put out the HAH trap in the eve & Voila!

Repeated the release at the wood pile.

Day off, sore right hamstring. Think it works but did not try.
C • Prudent, 2