To start of courses at Mt Norwottuck. Phil B had set courses there to cap off a training weekend (mostly held at Mt Tom and led by Greg A). Starting to get warm but still comfortable (high of 88 later in the day).

We'd been to Albany NY the day before to visit younger offspring Rob and his wife to celebrate Rob's birthday, since we hadn't seen them since his last birthday. :-/ We had a very nice visit at dinner and then afterwards sitting outside back at their house.

Failed attempt at the Brown course (3.6km, 170m climb). I visited two controls but had problems on them both, then couldn't find #3 (map is only partly to blame). Bailed out to a trail where it took a while to figure out where I was, then gave up and headed on in. Head was definitely not in it today, (and it was hot and buggy)

Neighborhoods and park, with a few jogs now and then, but obviously not fast enough to have AP mark it as a walk/jog. :-)

After the rain; temps warming up from mid 60s to low 70s while I was out. Humid now.

We've had a fairly new fawn resting in the grass behind a neighbor's house (but out in the open) all day, waiting for mom to return later this evening. 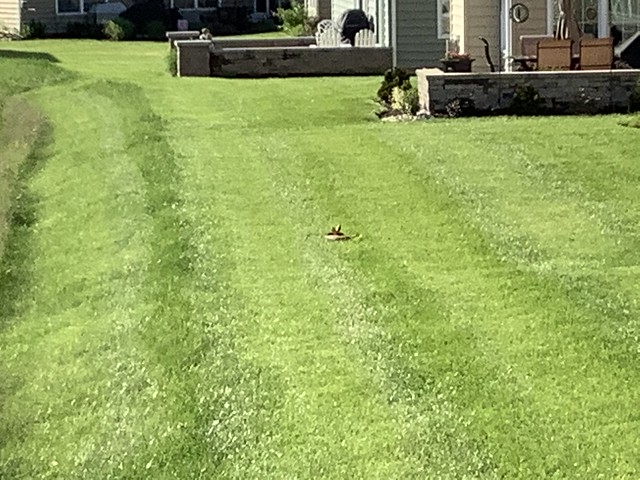 Hike/walk/hike (with Glen) in and near Lake Towhee Town Park in Bucks Co. Wanted to get in at least 69 minutes and/or 6.9km.... Temp was around 70 (actually, 69F) and overcast; we're supposed to have thunderstorms later today.

I had planned out a 4-mi road loop some time ago that included Strawntown Rd which is apparently not public access...lots of signs saying Do Not Enter and Private Drive, at least at the east end. (I might update OSM so it's not included in City Strides, after some more investigation.)

Dinner out later at a new brewpub between here and Allentown.