Recruited JoeP to come help over and help Jesse and me take down the monstrous (and pretty useless) large shed in the back. It was a long afternoon of destroying things and hauling them into the trailer, then hauling them off. Joe had several neat toys to ease in the demolition process, but Jesse was clearly both more excited about them and more at ease using them. I probably shouldn't be allowed to use tools. 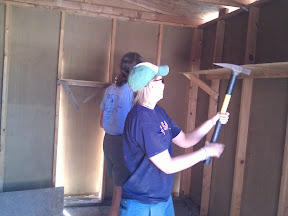 Watching the shed go from fully upright to this: 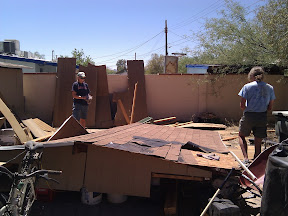 with Joe underneath it.

There were several horrifying seconds - between realizing it was going to collapse and finally hearing Joe say something - where I really thought something really really bad had just happened. Thankfully Joe was under just the right part of the roof and was fine after Jesse directed a successful prying mission to get him out.
10 PM 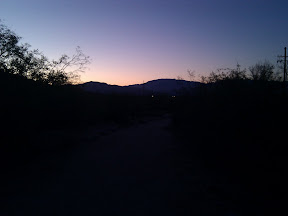 About an hour later, up Bear Canyon: 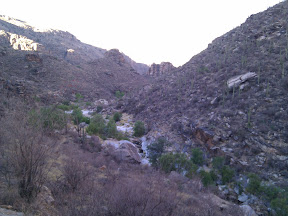 Chia-Chi enjoying the smooth and flatter part of the trail: 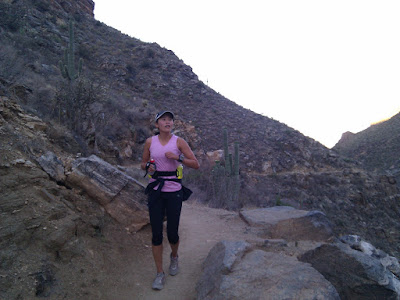 Me, well-rested before starting the last bit of the climb: 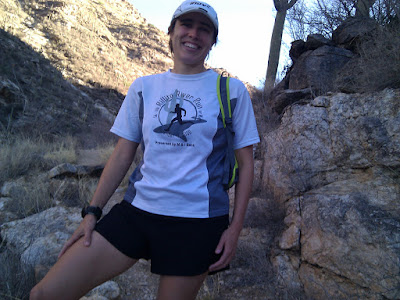 Okay, so some more detail. The Bear Canyon Loop is sort of the THE favorite of Tucson Trail Runners & co. It's a fairly moderate trail loop that runs up Bear Canyon, into Sabino Basin, and then down Sabino Canyon. I've run up and down various parts of both canyons and the basin many times, but I'd never done the loop. This was sad, especially since I figured I would totally dig it. And it's FAMOUS. So I made a pledge to do it before we left for Iceland, and then made more concrete plans to do it this morning. Got Chia-Chi to come, too. Picked her up at 4:30 and we were on the trail by 5, just as it was light enough to see where we were going. It was a spectacular morning, low 50s as we started.

This route is indeed awesome. The only part of it that was totally new to me was the section of Bear Canyon above Seven Falls. It was super, mostly still very runnable with just one steep section of switchbacks. And we had shade almost the entire way up! The drop into Sabino Basin was sweet, and then of course coming down Sabino was easy as.

I was very well rested coming into this and, according to Chia-Chi, I had a bounce in my step. I felt great. Chia-Chi, on the other hand, was not exactly fresh, and so we took it really easy and I stopped to let her catch up several times. Made for a very pleasant run, though I think the fact that it was a cool day (70s when we finished, barely hit 80 in the afternoon ) was a major factor. Starting at 5am was clutch.

Can't wait to do it again!

People got a kick out of the BDUs today. I was asked to explain my uniform schedule for the week several times which gave me the chance to use the phrase "Since I don't work Fridays anymore..." Awesome.

Got caught up in gathering things to disappear from the house and taking them to Goodwill and arrived at WOG after the main workout. Ran around the bike path with Chia-Chi & Co. Made plans for a BCL on Friday at 0500.

Also, got a very mirnor haircut because the shagginess was driving me crazy and I didn't think I'd be able to remain within regs until Jun 3. Wanted to leave as much hair as possible to make the 3 Jun haircut as much fun as possible.

Also, REI is awesome. They took back the tent that simulates rain forest conditions!
C • Last day in blues... 24