Back logging at the end of October. Yikes. This was the DM long. I did not like the footing of this forest.

We can blame the 9 am start on Patrick, what an overachiever :) Sam and I ran over to the start of the OK Linné Backbanan hill training course and met up with Mari and Patrick for our inaugural run on this course.

Waking up and getting out the door was tough, and Sam was way more cheerful about things on the pleasant jog through the Stadsskogen. There are so many trails in the forest and without a map we certainly would have gotten a bit lost.

Started out with Patrick, a map of the course, and - as is my wont - much too quickly. The course is really cool; there is only one hill in Uppsala (this is exaggeration) and the course makes full use of the slopes. Much of the time you are running through the woods, just cutting up or down the hillside, but the course has been used so much that there are tiny paths on all of the ascents and descents. Still you need to have good eyes and a map to see where to cut into the woods from the trail. Patrick climbed the steep sandy slope much faster near the beginning of the course, but then he made a wrong turn and I didn't see him again for the rest of the course.

I was struggling to stay on course and to keep moving fast, but now that I'm done I want to try to improve my time. The club has a list of fastest times, all of them very impressive, but it hasn't been updated too recently. There are lists for multiple laps and we'll see if I can get close to the leaders on any of these courses :)
C • isn't it lovely? Was thinki... 10

Mari lives very close to the Backbanan, so we retired to her place for drinks and recovery.

Night Orienteering! I feel like JJ's WHNO courses have prepared me well for this kind of race, but the terrain was pretty tricky. I meant to make the first control very easy, to ease myself into the course, but it was a tough control to make super easy. I was moving pretty hesitantly across the slopes until I got to the line of cliffs 200 meters short of the control, then I sped up a bit but ended up missing far to the right, and needing to correct. The next one was a lot better, and the third as well. stopped short on the 4th, and was just slow but able to stay in contact on the fifth. No real troubles until 12, when I decided to go out to the rough open field, but the field was awful running, head high with nettles and ferns with junk underneath, so I instead climbed back into the light green forests running parallel to the field, this made for a messy approach and not such a great attack on the control. Things went well up until the trail run in towards the finish, I over ran 18, and under ran 19... Oh well. I ended up a few minutes ahead of Patrick but behind all the other finishers. Not unhappy with the performance though, because it was hard and I'm still getting used to stuff here. I'll post map and results later, but now, bed!

Club training, meeting at the clubhouse for an interval session. A really large group starting out, maybe 12-15 men and 5 women. We did a short trail loop to warm up, and then the real training which consisted of 1 minute hard, and 2 minutes easy, x10, along the route of the testbanan. 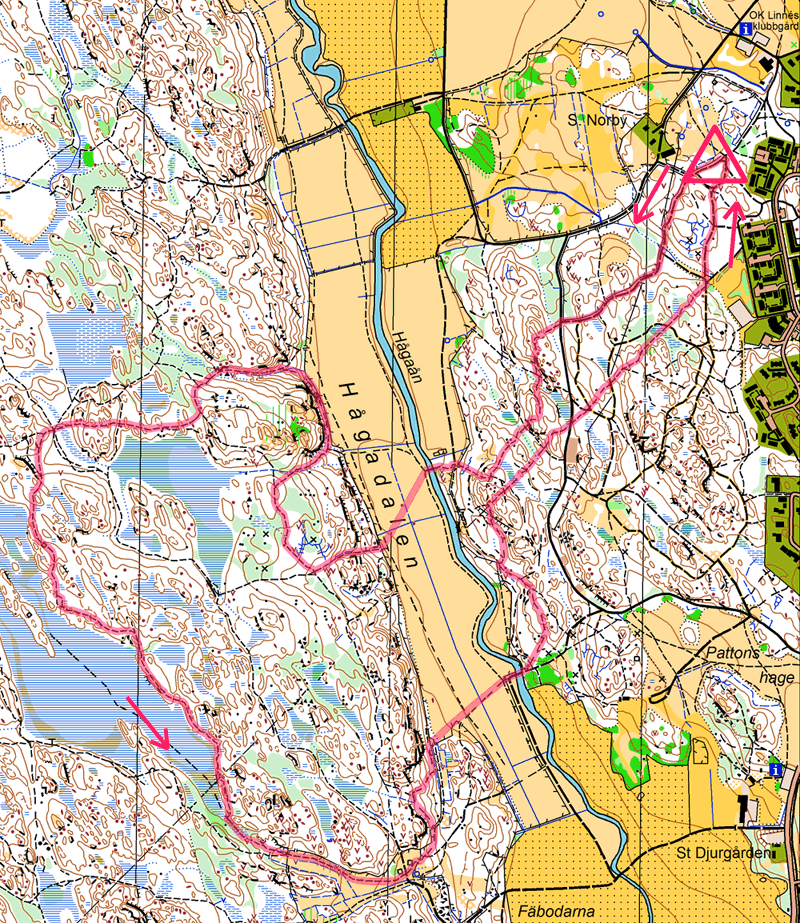 The trail was mostly single track, and overgrown in some places, but everyone was running hard. I was near the end of the pack, but I felt like I was a bit faster than the group I was in, but no reason to push ahead. The leaders were truly amazing trail runners, something to aspire to, for sure.

Then a short cool down loop in the fields before coming back to the clubhouse to shower and have a bbq of grillkorvs (not distinguishable from hotdogs). The social aspects of the club are awesome, because many people who couldn't make the training still came for the food.

After training Patrick, Mari, and Boris went off to get icecream and we all played cards on our new coffeetable. Apartment is starting to look pretty good!

A trip out onto Nåsten for a line-o with Sam. We ran out to start point of a line that Boris had drawn and then walked slowly along as we learned how to recognize features in this type of terrain. We didn't cover too much ground before we needed to turn back and head home, as we had a lunch date with Boris and Jan at a cafeteria type restaurant in the science park area of the university, Sven Dufva.
3 PM

Running to the clubhouse to pick up the club car. Need to go get Boris a bed!
6 PM

Pre-running a course that will be used for a local meet here in September. After a 15 minute run out to the start triangle I started in on the course and was able to pretty much keep track of where I was going throughout the course. The woods here are very soft and can quickly sap ones energy. I was about 2/3rds through the course when I decided that it was getting pretty dark, and then I had a real incentive to be clean on the course :) orienteering when it's light out is challenging enough. I managed to finish all the course before it got too dark to really see.

A couple of really silly mistakes and a couple of places where I was just not executing cleanly. I'd like to rerun this in a couple of weeks just to give it another shot once I've figured out the terrain a little better.

Slowly running home. Running on empty. I promised myself a bowl of cereal as a reward for when I got back. Sam and Boris had already finished their course and also their dinner :)

Running over to the clubhouse for training.

Running from the carpark to the start of the first loop. I lent my shoes to Mike who only had his sandals, so I was running in my flats... a little slick in places because of all the rain.

First training with OK Linné. Ran with Mike, Olof, and Anders. Made many mistakes, but a good feeling none the less.

DOMA Map shows in red where I thought my route went before I downloaded my GPS track. There are only a couple of places where the two tracks are vastly off.
C • awesome 4