WP A-meet (Middle). A decent race though not without flaws. Started out a bit aggressively, and rushed out of the 1st control to the left instead of to the right of the marsh, so my route ended up being a big S. But executed well, and caught up to Greg, who started 2 min. in front of me. Then was bailed out at #5 as I was just a bit to the left of a small spur, as Nick, Greg, and Sergei F. zoomed down to the control which was slightly misplaced on an unmapped other smaller spur. Then took the lead and I and Nick got away from Greg and Sergei F. on the way down to #8. I opened a bit of a gap between myself and Nick a bit later, but got caught off guard at #10, which was really tacked away and I just ran past it and had to make a small loop around just to come back to the same spot where I spotted the bag. After #11, Nick had a better stream crossing and moved really well across the rocky re-entrant on the way to #12 but I decided to climb earlier as he went down around the big cliff. I arrived to the control just ahead of him. Then up up for a pair of small legs and we started descending towards #15 and I had a better bearing spiking the bag at a small stream and then really picked up the pace towards #16 and then on longish leg to #17. Finished alone, feeling mostly ok with just a slight tiredness in my quads.
C • #5 7
Blue Middle - Splits 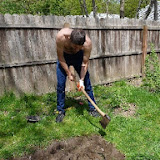 A fun but a disappointing run for me. Was doing pretty well, moving uphills, reading ahead, planing my routes. Spit away from the pack of Will, Boris, and John to #3 by taking the right of the marsh route choice. Got there just ahead of Boris. Then caught a sight of Will on the way to #5 on the left fork. Started to close the gap on him on the way to #9, and then suddenly lost him after punching the bag. Looked around, did not see him, assumed he went for a skip and decided to skip too. After 100m or so on the way to #11, scored a direct hit into my right eye by a stick. That didn't feel great, but wobbled ahead while pulling debris out of the eye. Then at #12 started to mentally leading myself to #14. Had to stop as things didn't make sense, made a loop around to relocate, but still couldn't figure things out, Then looked at the code of the last control that I punched and realized what happened. Still unsure of where I was, took a rough bearing to #13 and got there after seeing Boris' back who was heading to #14. Then saw the pack of Ali, Eric, and Boris on their way out of #14. Thought I would catch a sight of them on #15, but didn't. Slowly crawled down to #16 and then #17 while still unsure of where the pack went. Asked at the aid station and was told that I was fifth. With spirits down and a very little chance of catching anybody, finished the course completely alone.
Major props to Ali for taking my scalp. Still can't quite believe it though. A job well done!!! Looking towards the next week to take my revenge. Must not lose my sleep though.