Hm, did not leave enough time to be peaceful into quarantine, but made it, with the necessary stuff, unfortunately not my warm-up map. But saw Wyatt standing chatting with his, so asked if I could borrow it for a spin. Thanks Wyatt! Helps to get the feel of 1:4 after 1:15...

And, need a better warm-up for a sprint than a long, so did some speeds and such on the trail available!

So an ok race, but not 100% sharp, often hadn't figured out how to leave a control before getting there, nor did I know the control code before arriving. That's just too sloppy for a sprint. Plus need to light the fire a little more on the running part of things, I'd guess! I was 3rd this time, a minute down to Emma and 20-odd seconds to Sam.

1 - Should have followed line more directly after start control. Perhaps distracted by seeing Cristina's route before me and Boris heading that way too.
2 - I needlessly bashed through the woods, I think staying in the yellow/road would be better.
7 - Chasing down Cristina, probably could have pushed the pace here more.
9 - Hesitant, didn't want to miss the control in the green...
11 - Hesitant right in circle, should have just bashed into the green and looked around.
15 - Wasn't sure about where flag would be in relation to mini stadium thingy when I arrived.
17-18 - These I think I lost the most time not having read ahead and having to check control codes.

I wonder if I have my full running speed back yet. I may do a 5k this weekend to check...
12 PM

Warm up jogging around the quarantine, exciting as others were going out, running through the spectator, exchanging, woo, woo!

Well, Alex and Sam had done their jobs, so I had a good lead over Team Canada, but time to do my part! I didn't have a fantastic race, getting 'lost' for the first time all weekend on my route out to #6 after missing two trails in passing (not quite sure how that happened...) Panic totally set in, I had visions of it being so embarassing to lose the race when given such a good lead and having such other good races this weekend. So I kept trying to figure things out, ran into some cliffs which I wasn't sure if they were the row I was looking for or the ones on the hill along the way. Turns out there was a trail right there, ah, ok, so on the hill on the way there... continue on then! At least a minute lost, I think....

Other than that, things were fine, but that mistake meant I definitely just took the trails on the long leg back towards PEEC. A fav picture with us gals from right after the finish (thanks Kenny!): 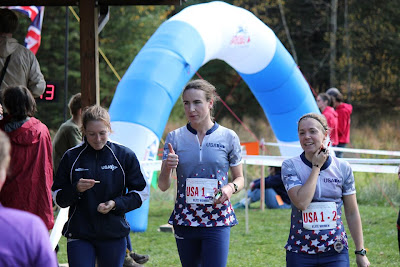 Headed out after breakfast to get myself used to 1:15. Some pace-counting calibration, just getting the feel for the smallness of everything on the map!
12 PM

Not much of a warm-up... Just wasn't feeling like I needed my legs as primed for the long, although it probably wouldn't have hurt.

Another good one! In fact, by WRE points, my best of the weekend. Again, no real mistakes, perhaps not perfect route choice, but nothing that cost me too much. 3 minutes and change back from Emma. I passed three-minute up Louise shortly after 9, having first seen her heading into 8. Then I caught Sam on the way to 13. I led into that control, but then she kicked it up a notch and we were flying through the rest of the course. We both need to reach the point we have that full-speed confidence on our own, because physically we can do it and stay in map contact. (Check out how even or ahead our splits are of Emma!)

2- Came out a bit higher than planned in reentrant, and just decided I was looking for a control in the reentrant, whoops, no, spur.
8 - Took low route. Kinda liked it, was fast running for the bit I was on the flat shelf, and maybe less up-and-down than high route.
9 - Bah, distracted by Louise into a route I didn't want to take. Serves me right. Took a gel at the control.
10 - Went left. Tried for a bit to make something right work, and perhaps that was the faster choice. But Emma went left and still put 1m45 on me. Jeez!!
13 - Once we were on the trail, probably should have stayed with it for a flatter route choice (little trail to big trail to straight shot between the little lake and big one).
14-Finish - Flying! =)
RedY Long - Splits

Arrived at NAOCs and headed out in the rain for a waltz around the model map, trying to note vegetation and other things. Noted that a distinct tree in the middle of the woods wasn't super-distinct and that veg boundaries were there, but difficult to make out in a flash.
1 PM

Warm up- a little more intense than planned, as I had forgot my uniform top at the arena, whoopsie!

A very solid race, 2 min back from Emma Johansson, just snuck in before Sam. It did feel like I was just jogging at some points, but I had no real mistakes or moments of confusion. I lost time in some little things, most notably right around the spectator run-through. I didn't give those controls enough respect, figuring they would somehow be 'easy' because of their proximity to the big open rocky area.

1 - A hard first control! I went in off the trail bend and contoured/kept to bearing which dumped me right at the reentrant and control. Phew!
3 - I went straight, Emma was signifcantly faster, I wonder how...
5 - Lost time hesitating choosing a route from #4, ended up using trail of white for a bit.
6 - Drifted too far right, slowed down to adjust.
8 - Was confident and just opened up and ran! Won that split by a bunch =)
9 - Wow, really lost time on this one, should have kept the running speed up, it was an easy one! I remember hesitating, should have just kept the confidence.
12 - I did the hillier route choice, should have gone right, I think.
13 - Ooh, terrible. Jeff Teutch came screaming by, tried to use him to pick up the pace, but that left less brain power to figure out actually getting to the spectator control...
14 - Again, not enough respect, just figured I'd see it on the other side of the wide open, and there were also other people around who I kinda figured might also find the control. But we were more left of the line than I thought, and another control was kinda similar in a narrow reentrant and then was starting to head too far E before correcting. Boo.
15 - I didn't have a good route, and was hesitant the whole way. Angelica came screaming by me at one point, which kinda kicked my butt into gear!
17 - High percent behind on this one, I was hesitant avoiding going to the lower (wrong) boulder.

Very chill specific strength workout around the neighborhood. Lots of folks cleaning the leaves off their lawns. Read a map of Stuckey's Pond, finally getting out using the map holder!
9 PM

And did my orienteering homework, finally! Have QuickRouted both the SMOC meet at Mill Lake and my most recent training on the Wildwood map (both linked below). Turns out for the latter I missed a control site or two, whoops!

Also read up on Bulletin 3 for NAOCs- excited!

Is anyone heading from somewhere along I-80 towards NAOCs on Thursday? I would really, really love to carpool, drop me a line if so!
5 PM

A very multi-color day =). Biked to Wildwood, because I'm trying to take it easy on my injured toe....

And second time orienteering at Wildwood! Used more of the terrain, totally usable, except when I tried to get to the bit in the upper north-east corner, which it turns out, is on the other side of an uncrossable body of water. Well, probably crossable if I really wanted, but eh.

Surprised lots and lots of deer. Think they have learned that people generally stay on the trails.

Bike path + Wildwood loop rxc, alternating between double pole, no poles and with poles about every 10 min. The Wildwood loop does have some gradients, one I even V1'ed up in a bit of a lazier mood...