Fun times with a 8-hr rogaining foot-only adventure race called Crooked Compass, organized by Rootstock Racing. Met Ruth Cunningham on a parking lot near the PA Turnpike entrance at 4:45 AM and we drove the 2h20m to Bedford, PA, and then to the state forest where the event start was. Ruth is a very strong mountain biker, she has been doing races for 25+ years, and very accustomed to endurance multi-day treks. She doesn't do much running or foot-only events, but she is open-minded and was interested to team up. You don't easily find people that want to get up at 4 AM to go for a race. And off we went !!!

It was actually snowing in Pittsburgh that early morning, and driving over the mountains of the Laurel Ridge, we slowed down to 45 mph and carefully followed the tail lights of a big truck. Snow plows where in operation with their flashing yellow lights. Nonetheless, we made it to the start at 7:20 AM and had time to look at the map. 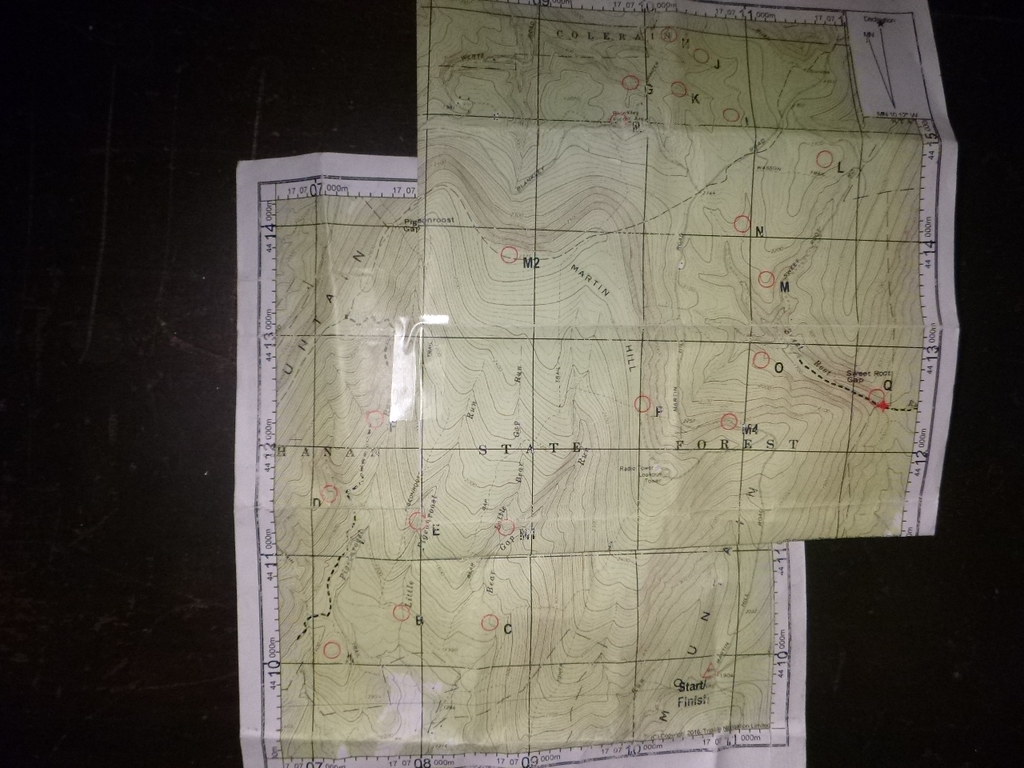 There were 4 checkpoints marked M1, M2, M3, M4 which were mandatory and other checkpoints marked A to Q. The only rule was that M1 had to be first checkpoint to be visited, as it was the location where the passport (aka control punch card) was to be given out.

There were two route options to get from the Start to M1, either by lazy road and some bushwacking (longer), or direct through some rambles, hills, and creeks (shorter). We went for the latter. 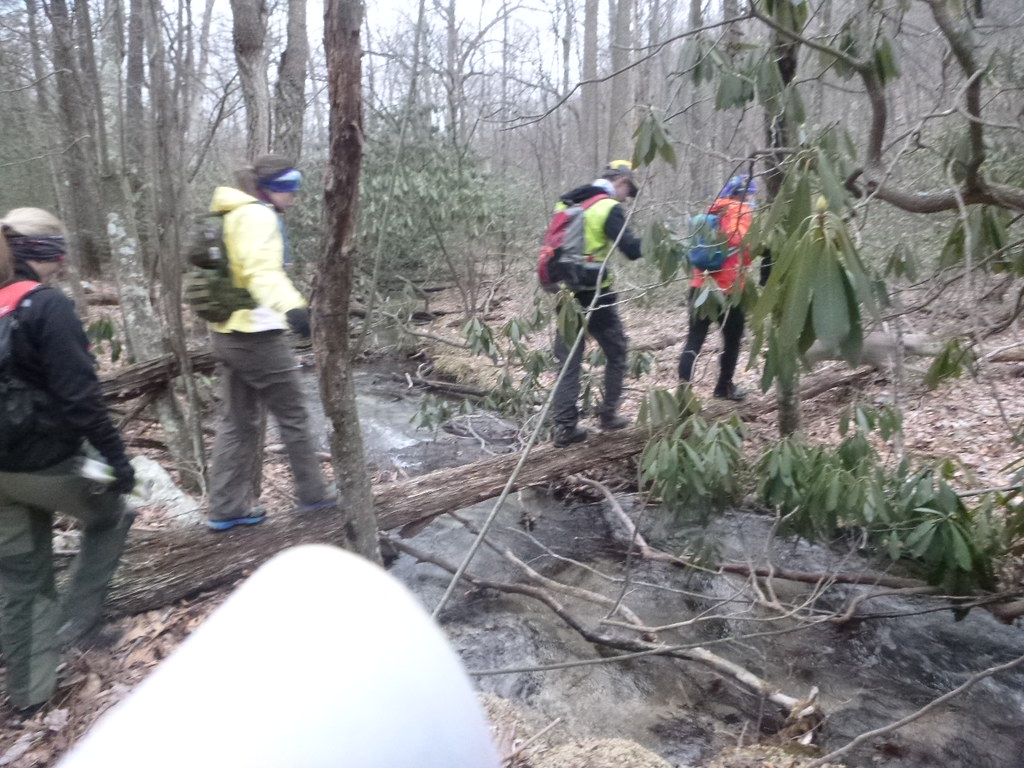 The M1 checkpoint was on a rocky spur, littered with large boulders and cliffs. We got there as many others were converging from South, North, East directions. 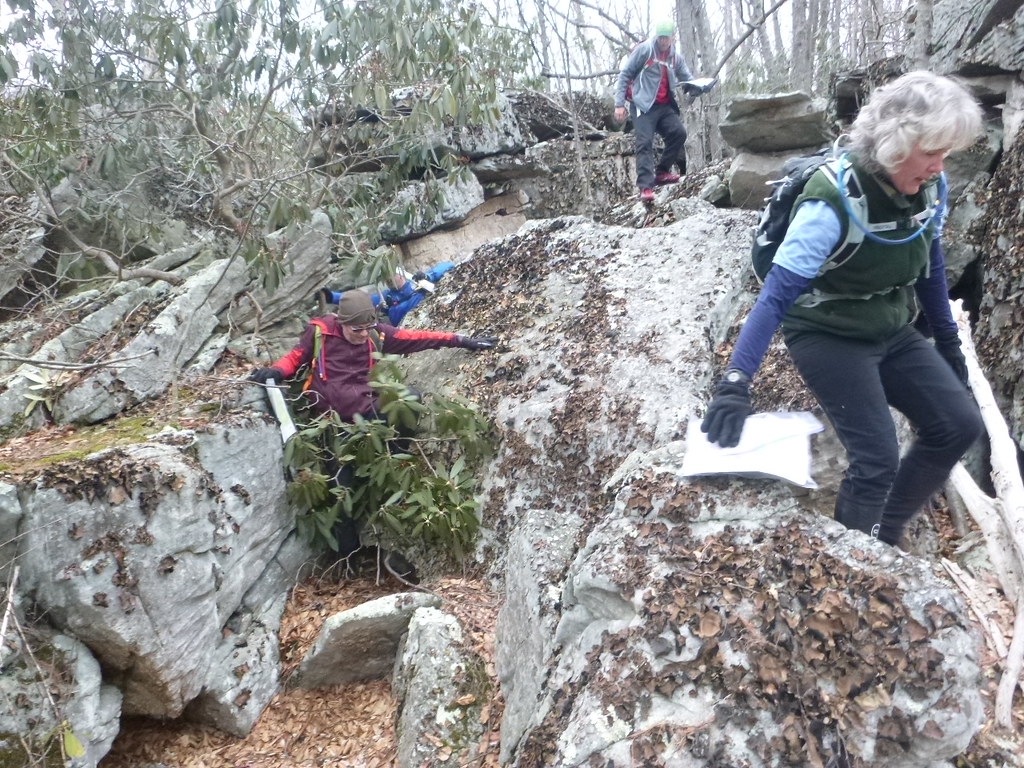 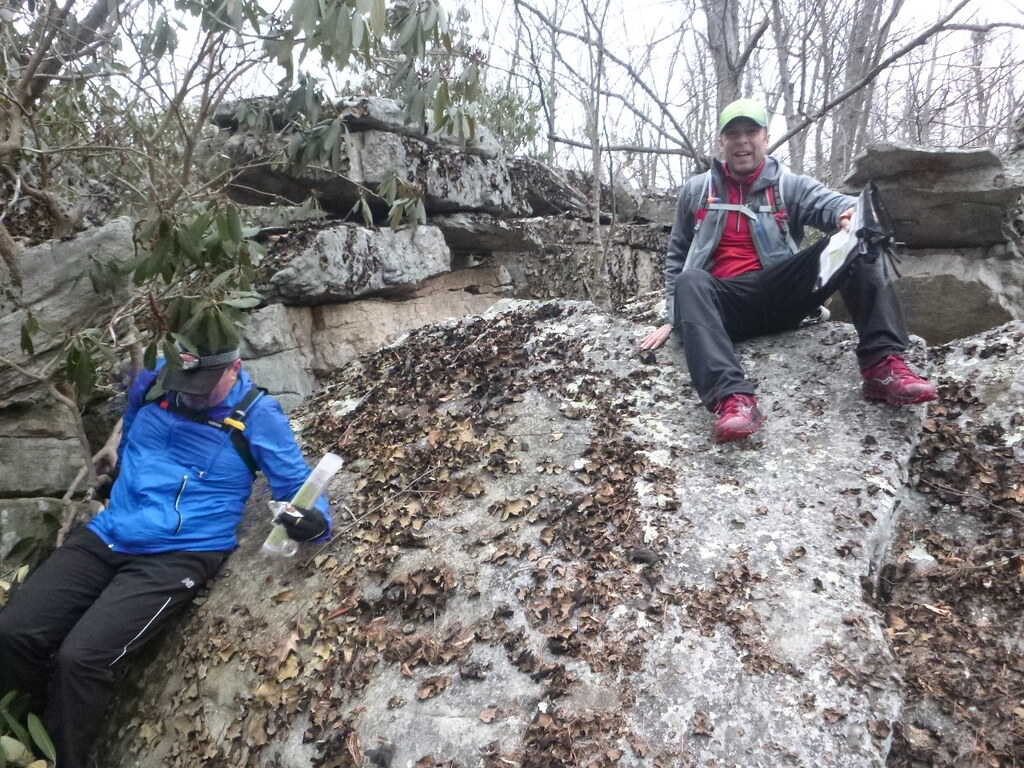 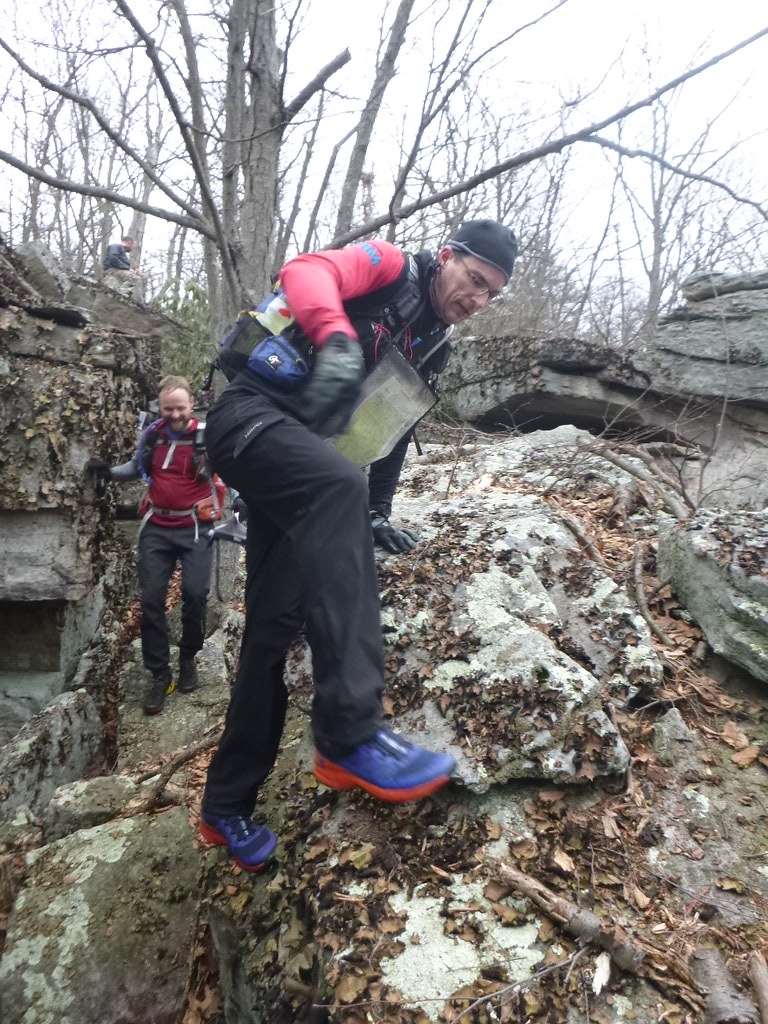 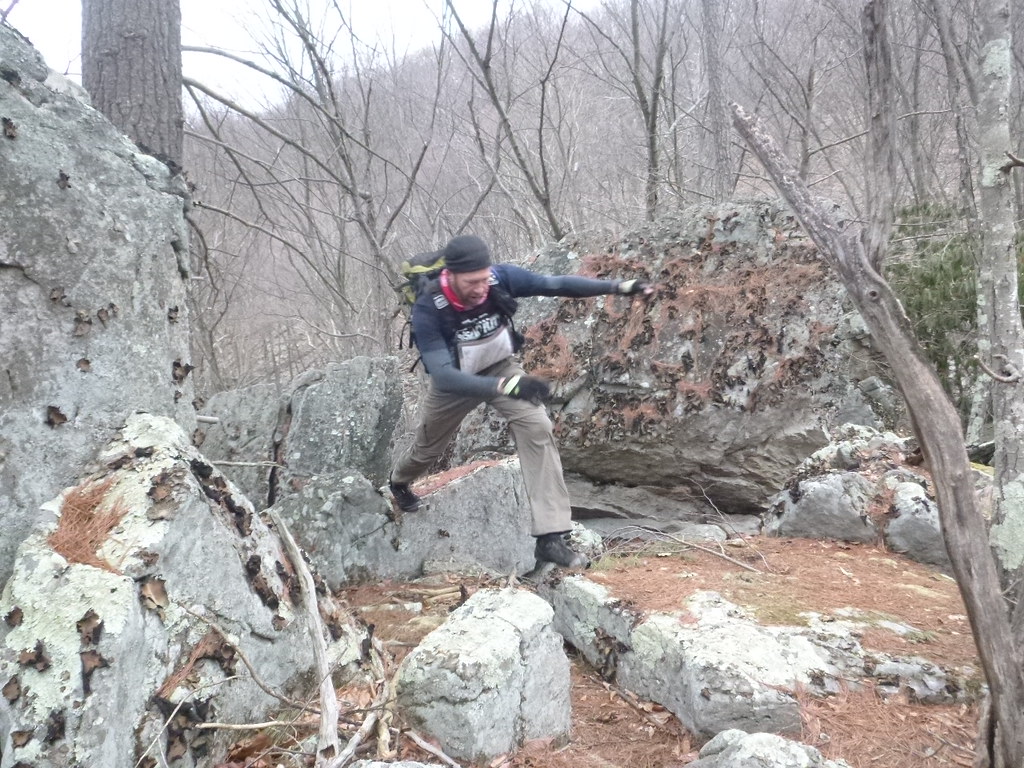 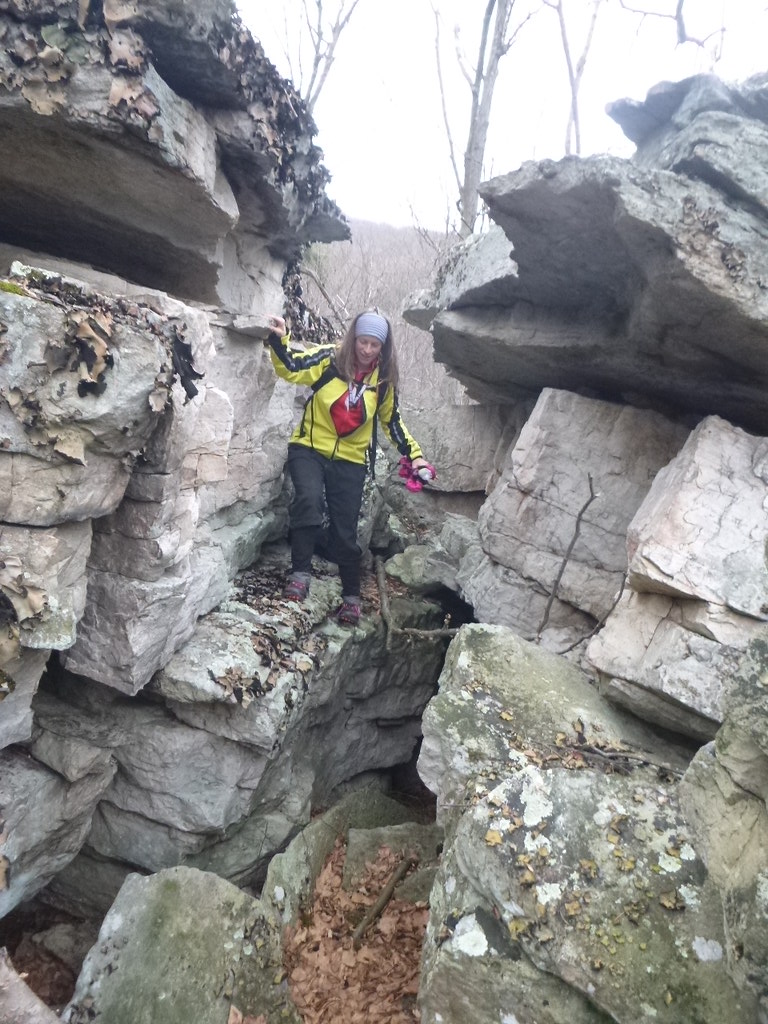 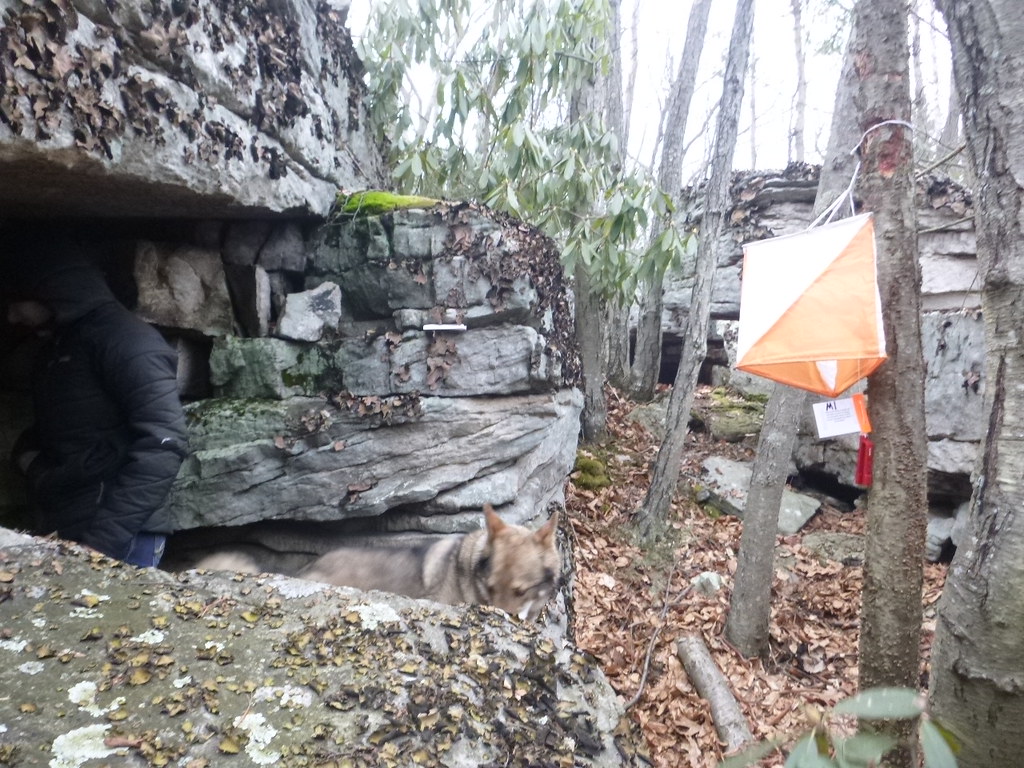 Our next checkpoint was C, located on a stream bend. Beautiful stream, btw... 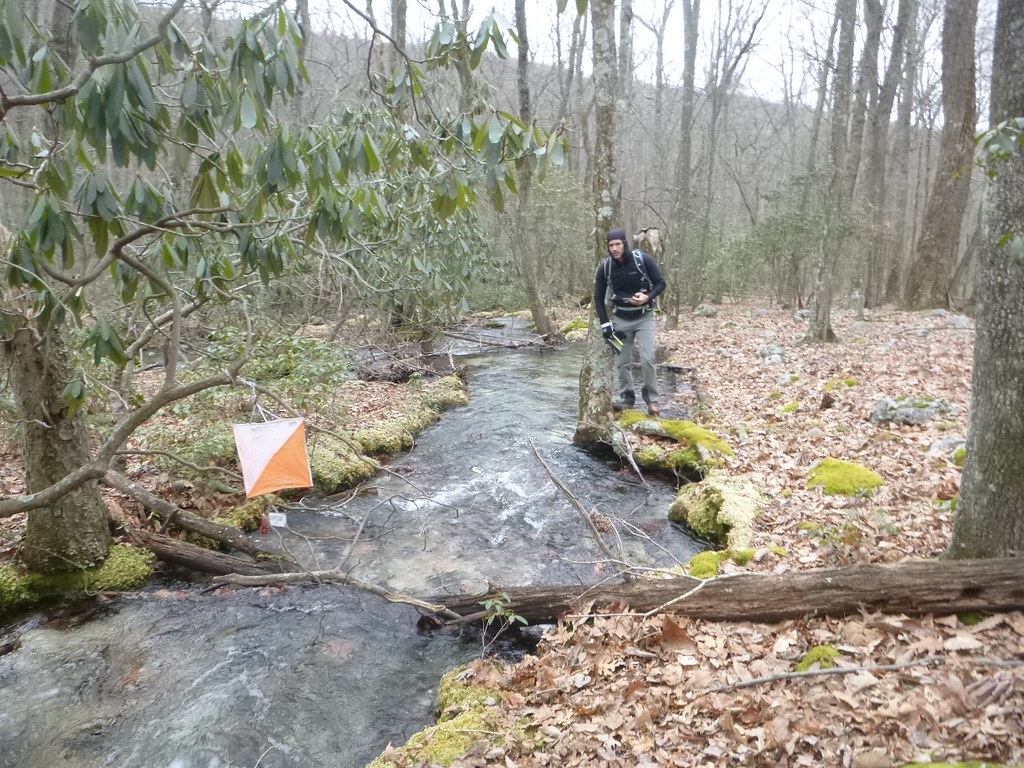 Then we went to B, also on a stream. 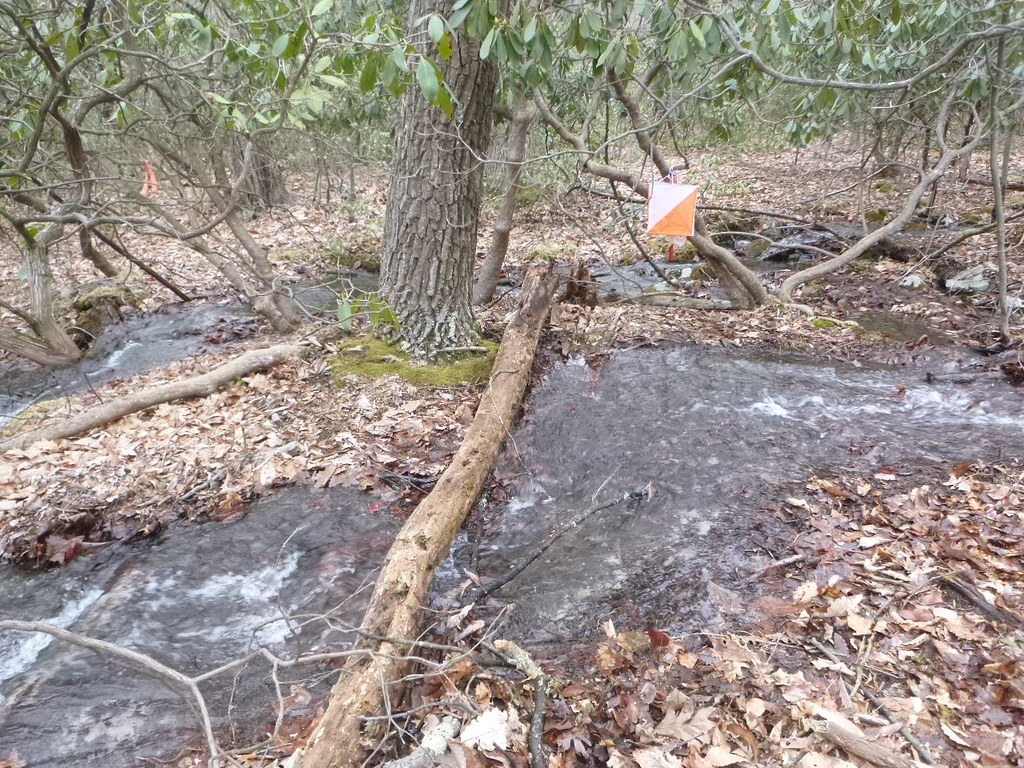 After which, what happened was the setup of our huge mistake, that ended up costing us one hour. We decided to go to A, and it seemed an easy task. Just a few meters north of checkpoint B there was a large trail, almost a jeep road, and decided to follow it. On a quick glance to the map, noticed a map feature that looked like a trail but it was a actually a contour line, broken up a bit and it looked like a dashed line. My mind and eyes, somehow, decided that, that contour line was the trail i was on. More confirmation that I was on that "trail" came when we found a fork with another trail, and looking at the map, the contour line camouflaged as trail did indeed have a junction with another trail. At the end, we ended up in an area of the map that just did not correspond to the mental model we had in our minds, and lost awareness of where we were, and eroded gradually in making decisions, wrong most of the time, circles and greater circles to find other recognizable features, and it was only when we saw other competitors all coming from one direction is that we then got clued on a hint on where to go and explore. Red line: the trail we actually were at. Blue line: the trail we imagined were at. Green arrows pointing to the two trail junctions, one real, one imaginary. Label "B" positioned on a spot of the map covering important map detail information such as trail symbol. 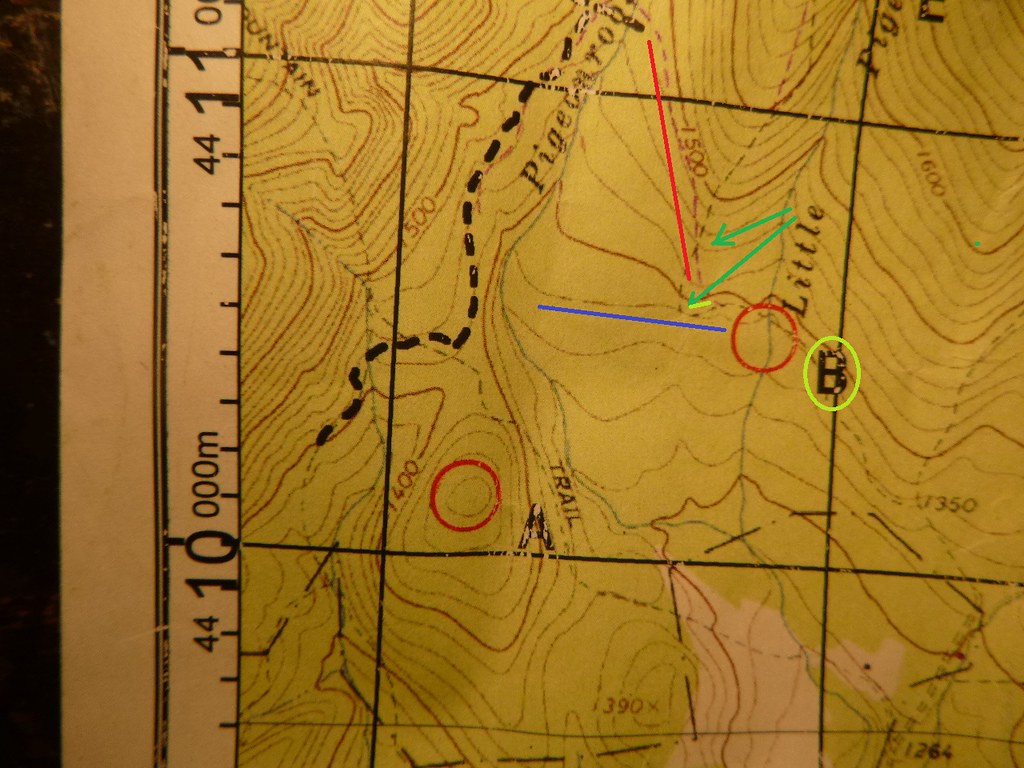 We eventually found A and then proceeded to E (in retrospective, should have gone B-E-A instead of B-A-E, as there is an easy trail just west of E that leads downhill towards A. In this area, beautiful BEAUTIFUL streams ... 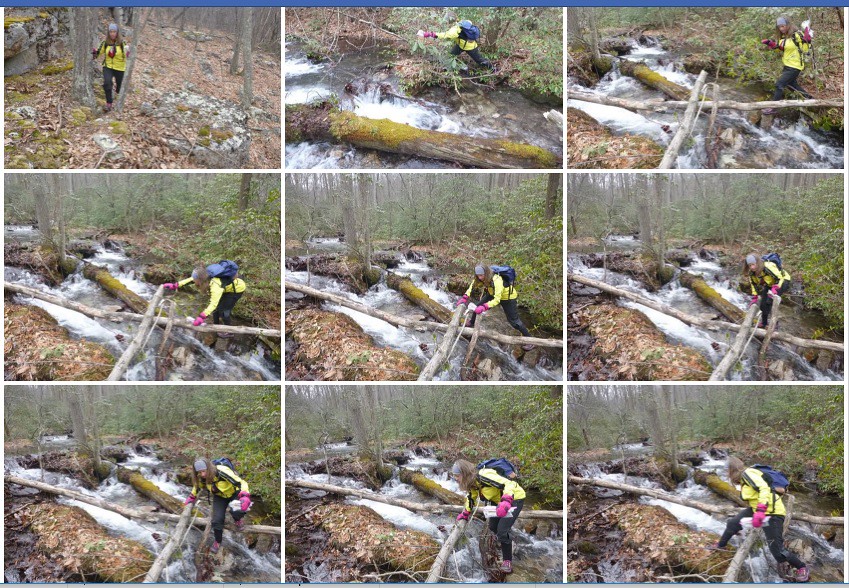 From E we then went to D, positioned next to some interesting rock formations 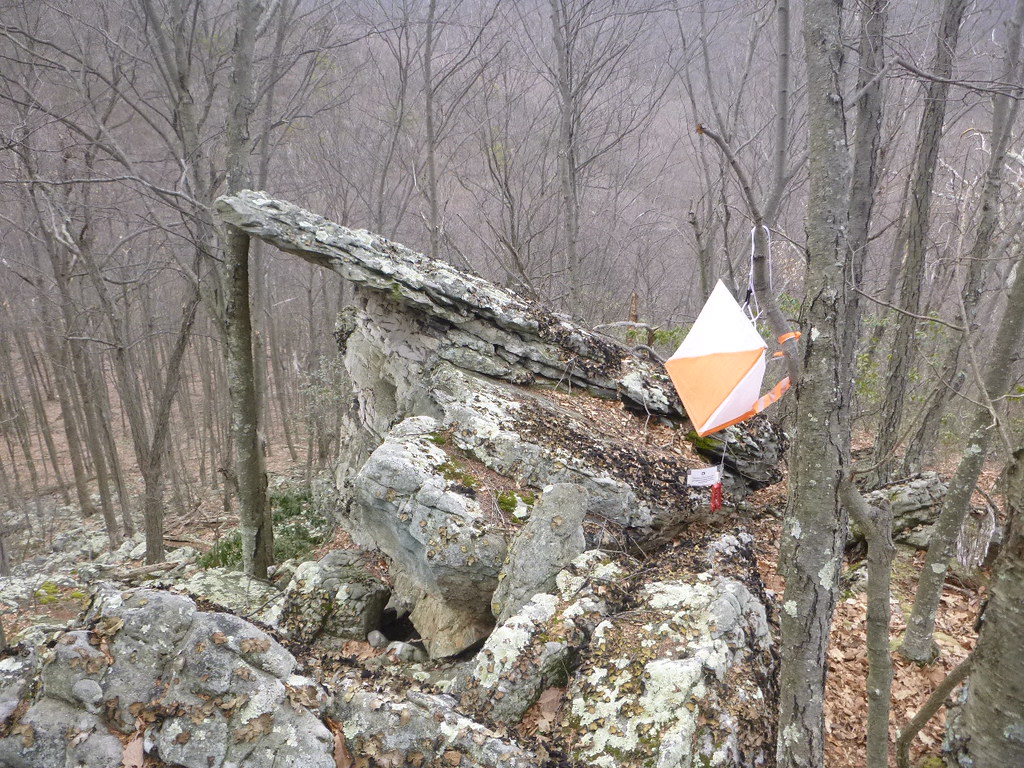 Then to F and then we bushwhacked north to gain the top of the ridge. That bushwhack section sucked alot of time as we were constantly looking for apertures in the thick vegetation of mountain laurel 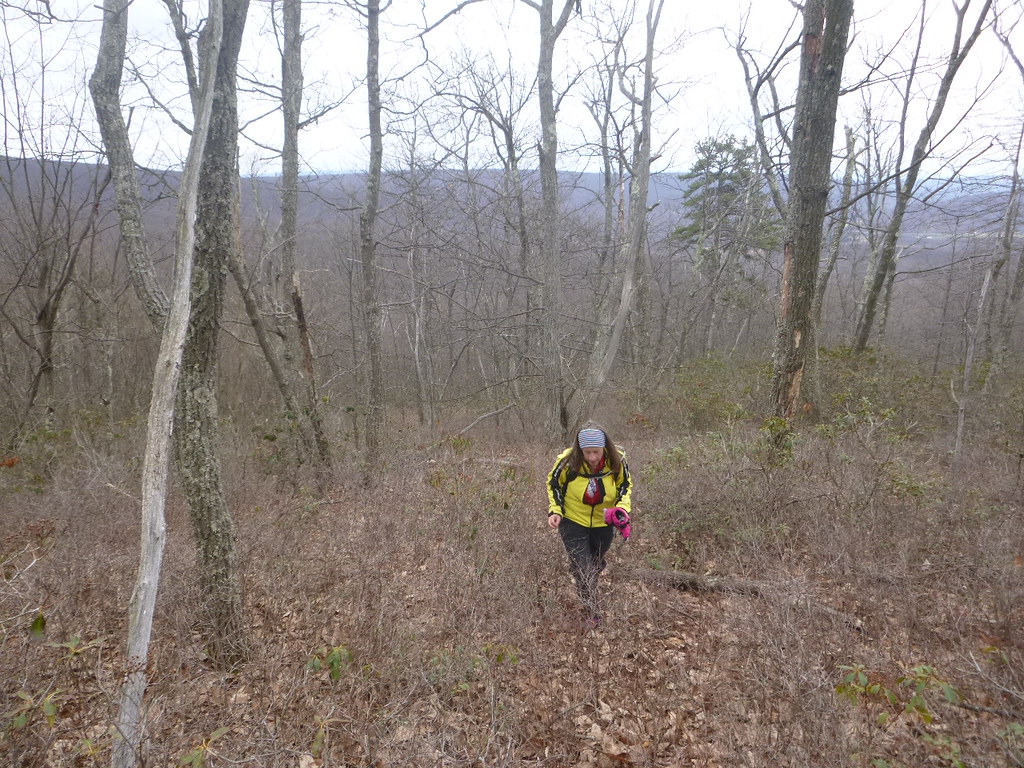 After a long run on a dirt gravel road, the second mandatory checkpoint M2 was to be found among "boulders, hanged low". We didn't find it on the first pass, but spotted it 15 minutes later on a second pass. It was visible directly from the road 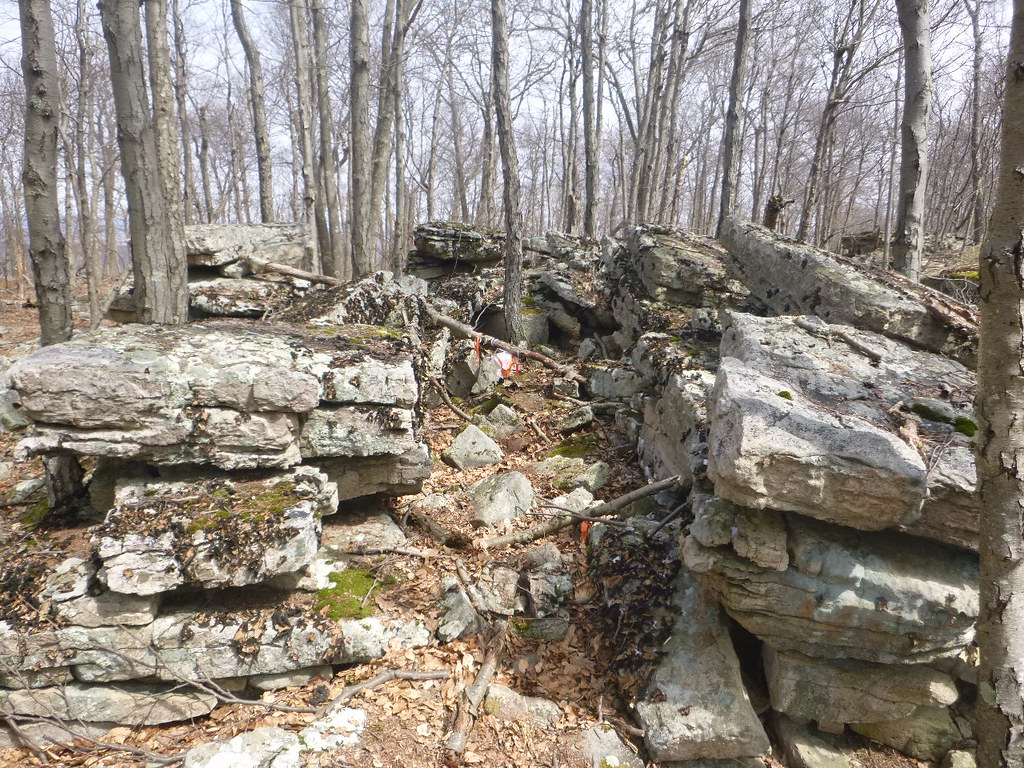 We then left the gravel road and followed "Cabin Trail" downhill towards the picnic area. A section of trail was sided with rows of rocks, something that resembled a scenery from Ireland or Cornwall 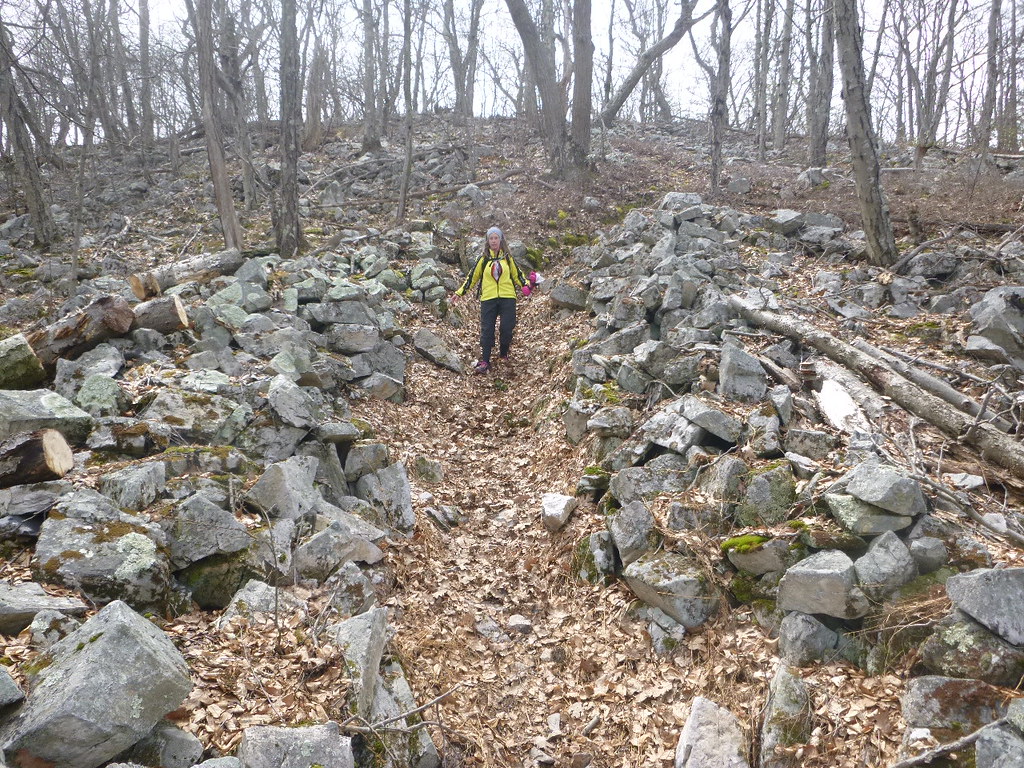 At the picnic area, where the third mandatory checkpoint M3 was located, we were greeted by race volunteers with a burning fire to warm our bodies 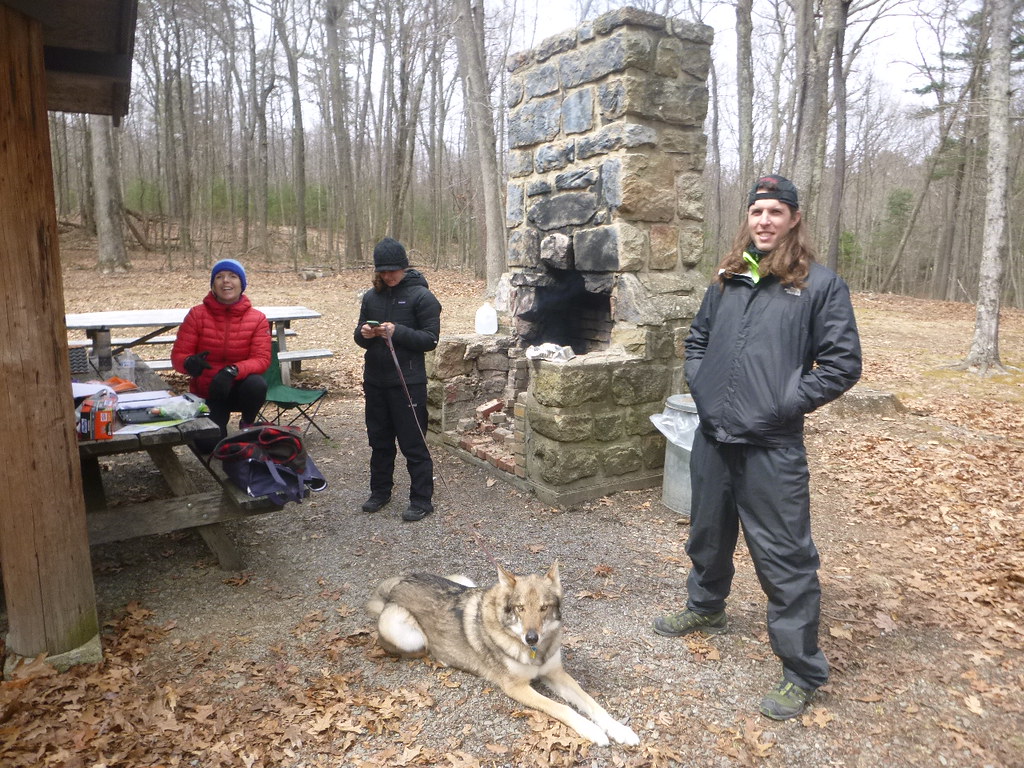 North of the picnic area was a group of five checkpoints, G H I J K, all closely located. In retrospective, we should have strategized to collect them all, but instead opted only for G K I, as we wanted to save some time for the third cluster of checkpoints on the northeast section of the map. Going from M3 to G, no problem. Going from G to K, no problem. Going from G to I, somehow we got into the habit of following the stream, as indicated as a blue line on the map, but instead the stream was on the reentrant on the south. We soon realized our mistake and corrected it, and we eventually got to checkpoint I. Nearby, we found a jeep road (purple line) that was not mapped and impromptu decision, we decided to go for checkpoint J, as it seemed the road was going in that direction and it was an easy run. Well, the road did not lead us to J but instead on a saddle point intersecting with Shaffer trail, something that my eyes didn't read on the map. Now that I am writing this and reading the map with a magnifying glass, I can say we missed an opportunity, as the sequence M3-G-K-H-J-I was easily doable. Then, gain the main road to M4 and then to Finish. 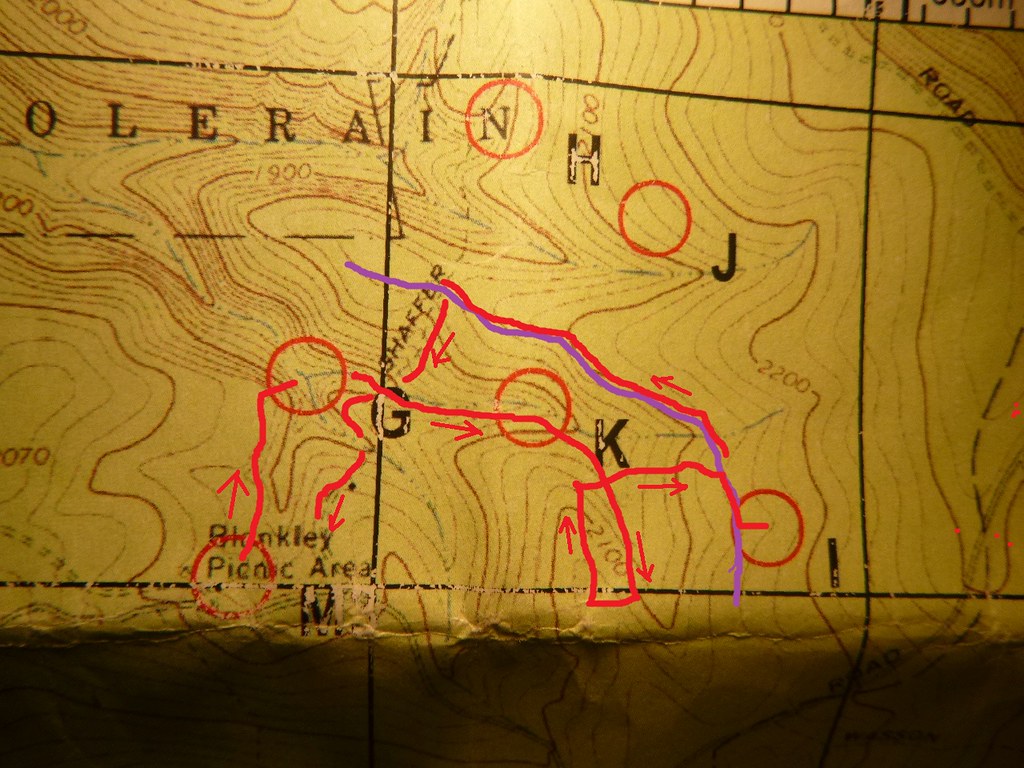 We finished 10 minutes late. The parking lot had a cluster of standing people munching on food and hot beverages, and waiting for the results announcement. 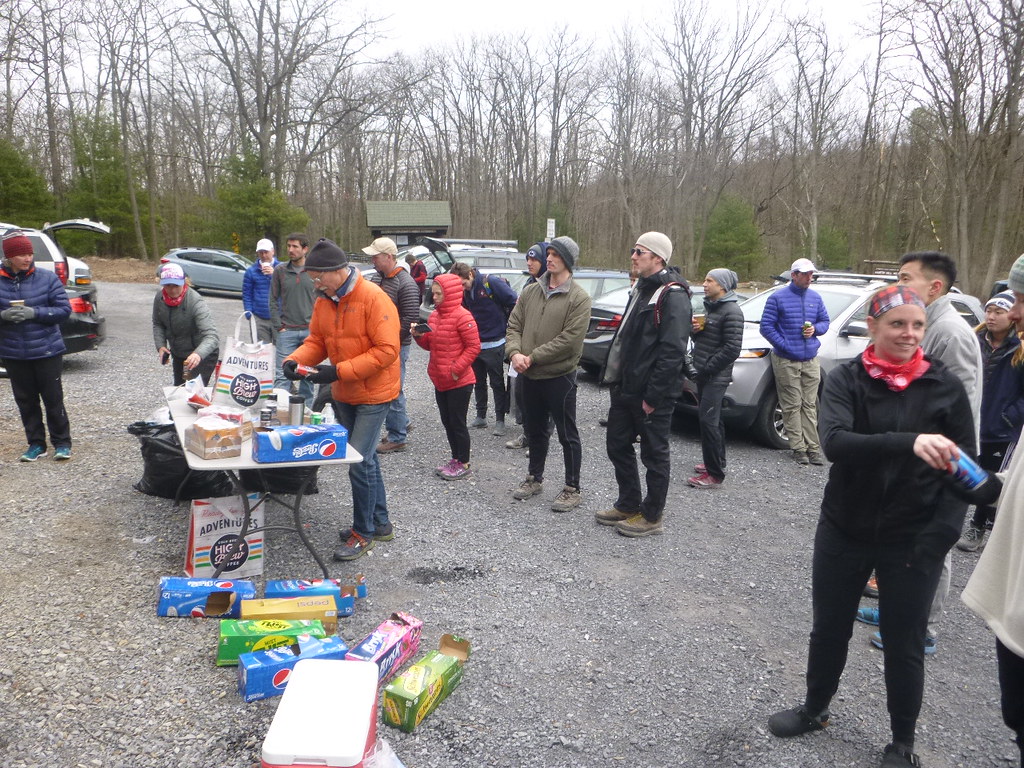 The sun came out. The snow that was on our vehicle hood had melted. The bodies tired, but the minds happy of the achievement. About 18 miles, half of it bushwhacking through rambles of central south Pennsylvania among mountain laurel, beautiful streams, rocky and boulderish landscapes. Not a bad day after all... 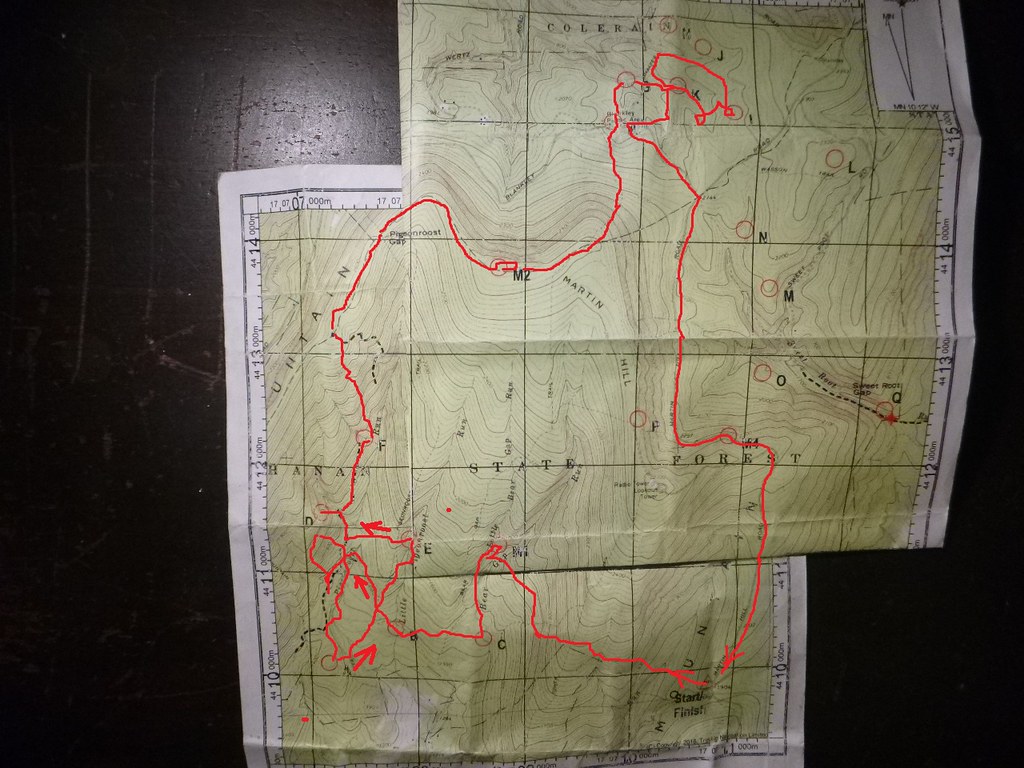