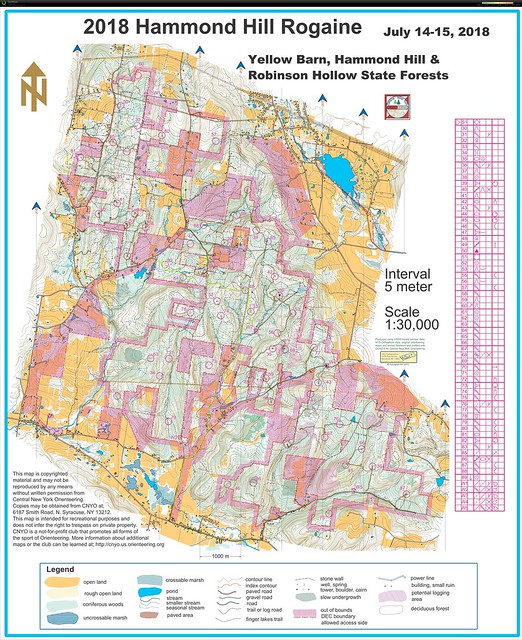 Mistake 1:
Overconfident, we thought we could "wing it" and find the control without using the additional attackpoints, such as the spring. Big mistake. At the end, after two unsuccesull passes, chose to find the spring, and used that as AP. Bingo. Don't do like us 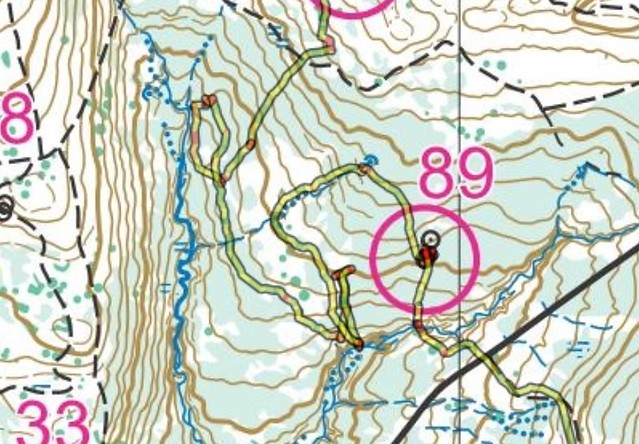 Additional note on Mistake 1:
there more i look at this, the more I realize what happened. There was DEFINITELY a stream going north, ending with a spring. Very faint on the map. What is on the map are the blue dots for another stream located in parallel to the east. We thought we were following that. 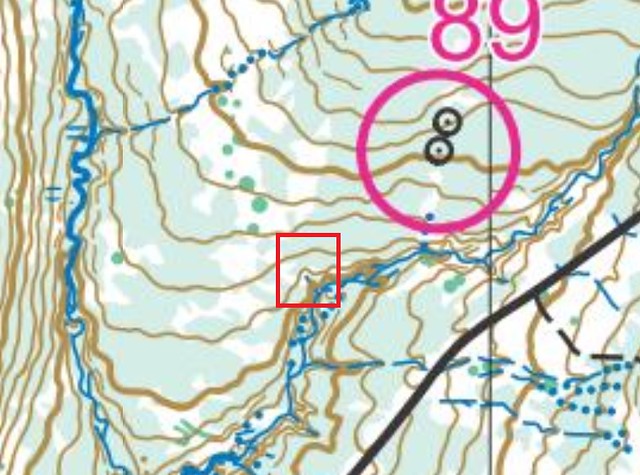 Mistake 2:
Many like us could not find 85. The GPS track shows us walking on a very clear and identifiable trail. I don't see that trail on the map. 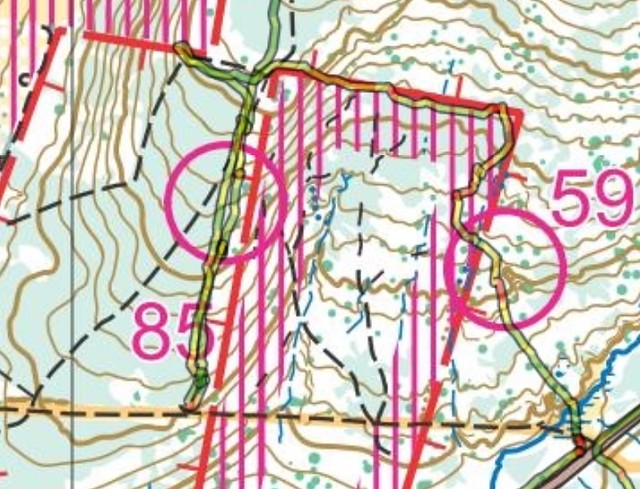 Mistake 3:
Somehow we screwed up here, literally, "screw", as in going concentrically in a curve. After a quick check on the compass, someone yelled: "hey, we are going West, not East" 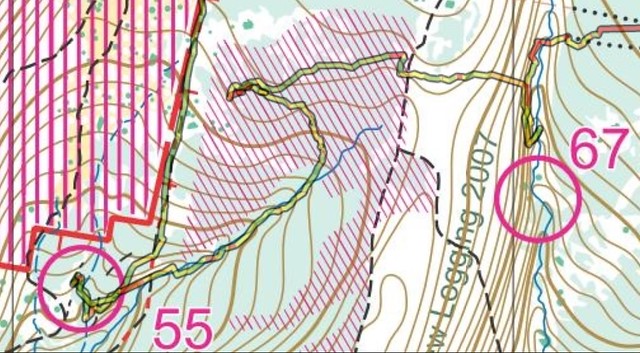 Mistake 4:
Things didn't work out too well for us, as we went looking for that small trail. Never saw it. 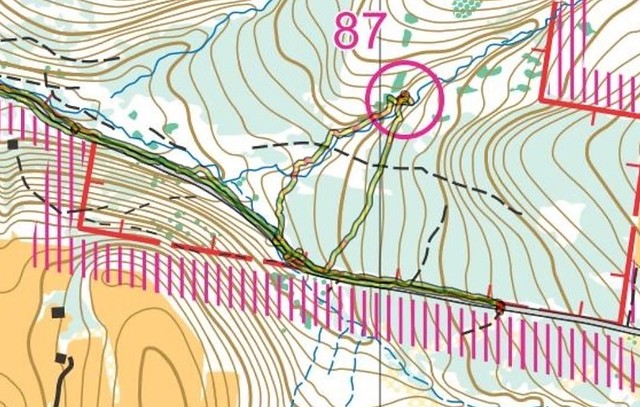 Mistake 5:
On NY state road 79, we intersected a road coming from the south named and signed as "Level Green Rd". Thinking it was the mapped road in the red circle, we then thought we overshot the spot in which we had to turn North and backtracked. But when we got to the road going North, a sign said "Dead End" and we got really confused. Where are we? So we looked at the map more closely and noticed that on the map, the road coming from the south and intersecting Route 79 is a spot where the latter bends a little. So we walked back to that intersection labeled Level Green Rd and noticed that Route 79 went straight, and thus we concluded it was NOT mapped. We continued walking West and we found the road going North that we were looking for. Getting lost on a high-traffic paved state road - that's a first...

Mistake 6:
After 82, our mistake was going a bit north. Should have gone South. Result: we ended up in a marshland with very thick vegetation and high elephant grass. Should have paid attention to the map, as the trail crossing the marshland is actually a raised footbridge and would have been neat to walk on. 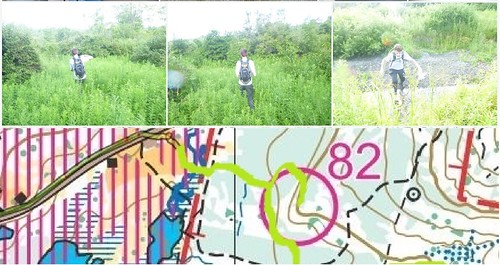 Mistake 7:
Amazingly, we never saw the control sign (9:30 AM). We must have walked 10 meters from it at the most. We were traveling towards east, south of the stream, and never saw the junction. Arrived at the spring, we expected to see two ditches joining, but they weren't there. On the map, the small dots of the two streams are blue dots, but somehow our tired eyes saw them as brown dots, and somehow made us believe that we were looking for two ditches joining. The clue sheet does say "stream junction" but we didn't read the clue sheet. On a hunch, walked north a bit to find the northern stream and that is when we understood we were on something. Amazing on how we got confused in clear daytime on something like this. 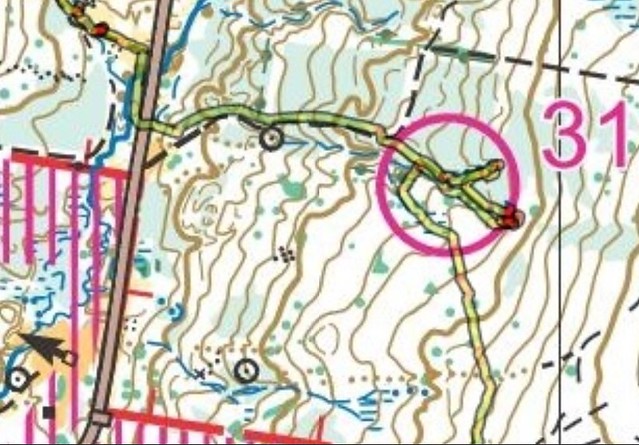 Circle placement for control 67:
Noticing from the GPS track that the circle drawn on map may be a bit off from the actual control location. Anyone else has GPS track that supports this? 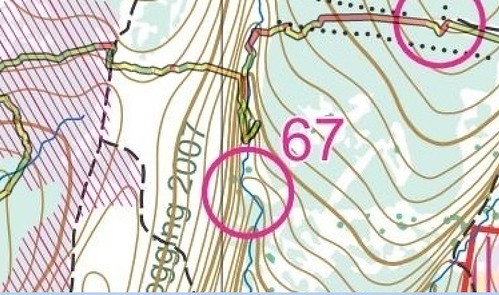 Overall, while we regretted having to miss the FIFA World Cup final televised event (this event that has the biggest world audience ever), this annual rogaining event put up and set up by Eric and Mary and other volunteers, is such a good show, that was totally worth it. The tent camping, the food visits at the hash house at 2 AM, 7 AM, and at finish, the natural setting, and the conversations with other rogainers and like-minded map geeks, all good vibes and memories, with now the map framed and hanging in the living room.

The Finish:
Trying to beat the clock, with one and a half minute to spare... 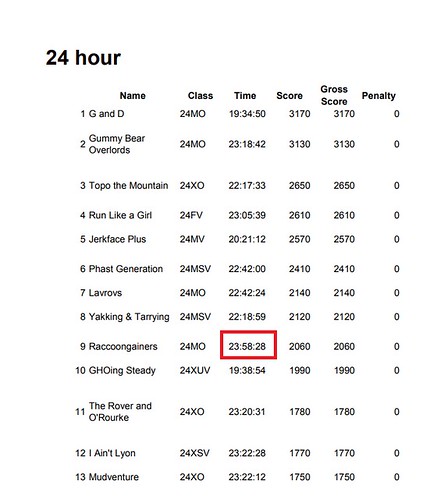 Really enjoyed the detail in the map: 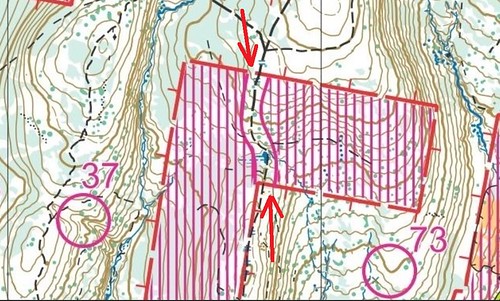 One note about sleep (and lack of sleep):
Napping from 2:45 AM to 6:30 AM was enough to get a huge body recovery and felt very energetic for the remaining 5 hours of rogaining. But most importantly, had no need-to-sleep spells during the 6-hour drive back home. And of course, changed shoes, socks, shirt, and used a smaller pack for the shorter distance. So, bringing to the event HQ lots of socks, 4 pair of shoes, different packs of different sizes, and over-abundance of fashion clothing to pick from and wear during the middle-of-the-night break, worked out really well.