Terrain conditions were very dry. Wooded area with a variety of trails. Some boulders, logs covered by ferns. There was a long leg towards the end that took me 10 minutes to complete. 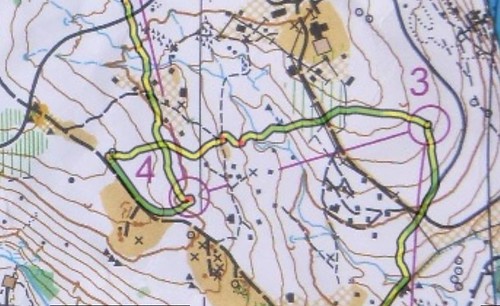 Drove into the Boy Scout camp on Friday afternoon after just a 2-hr drive from home, not bad compared to the many participants that are coming from far away lands. The reservation has two camps: Manatoc and Butler. Last year it was in Manatoc, and this year it was in Camp Butler. 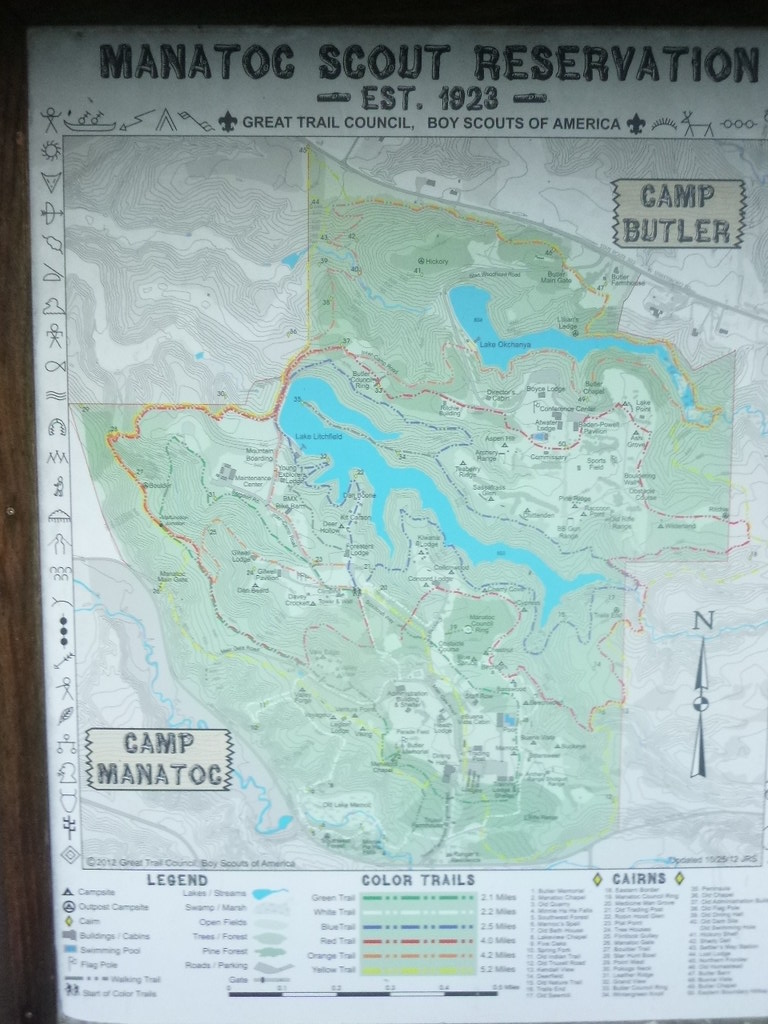 The lodge had a bunch of bunk beds, one kitchen, and unfortunately only one restroom/shower. 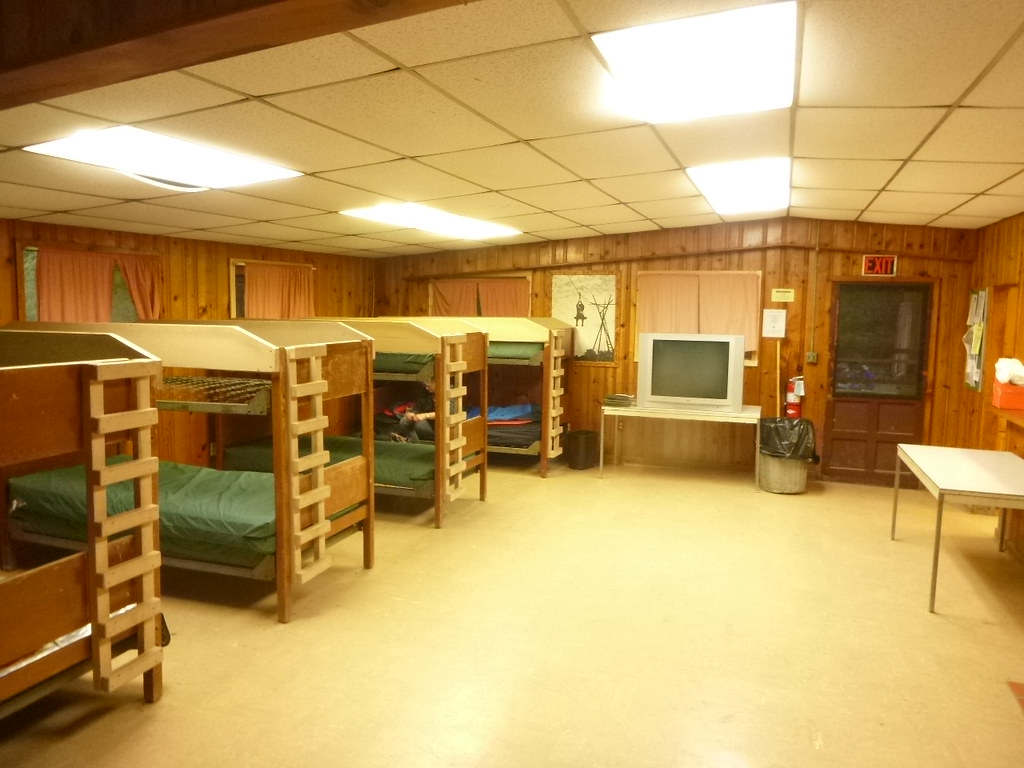 Since folks were driving long distances, they were to arrive late at night, possibly at 2 AM, and a writable board was devised to inform others of which bunk bed was occupied and which was free. 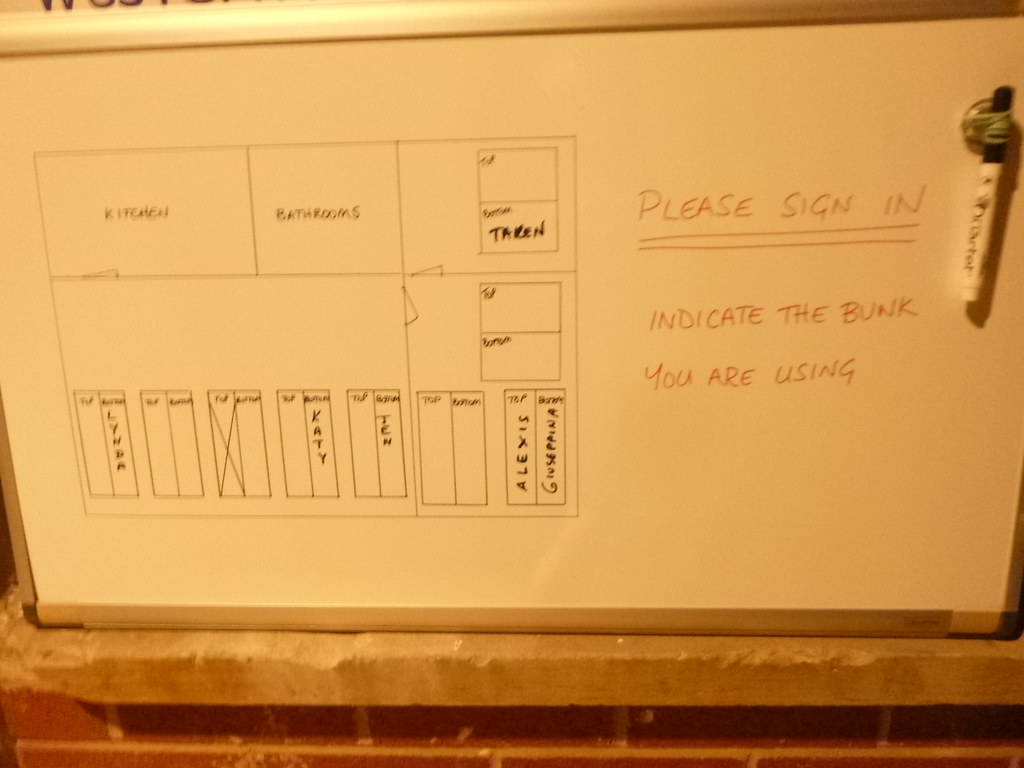 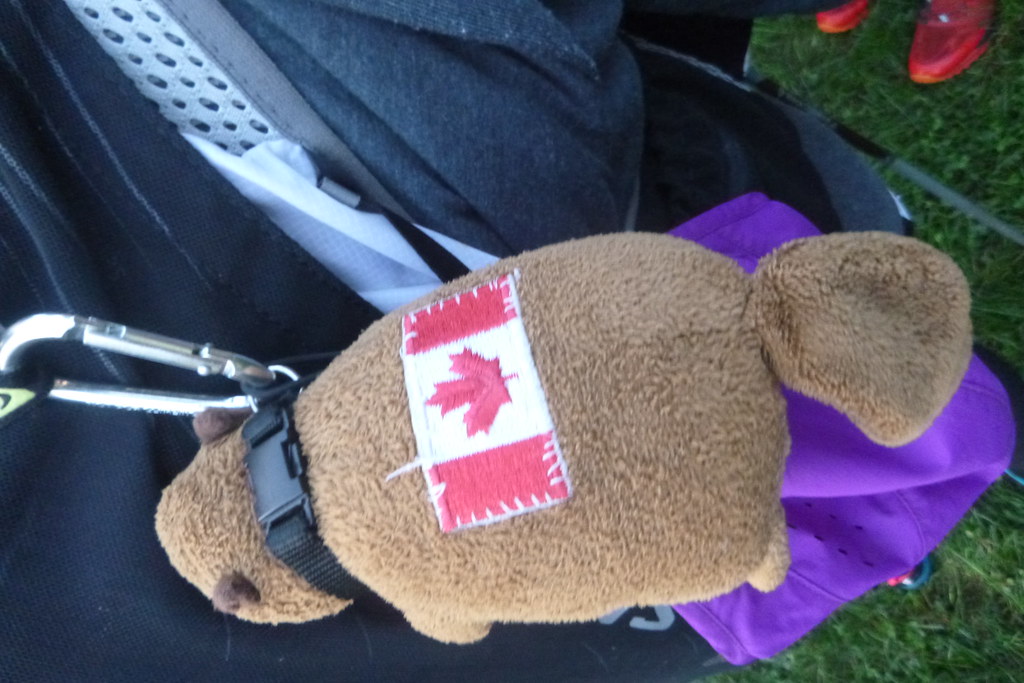 Did a loop that lasted one hour towards the east and southeast from the start to collect a few controls, to then return to the start area, and just past 9 AM, I caught up with some 3-hr participants that just started, and by pure coincidence, found myself intersecting with a special person 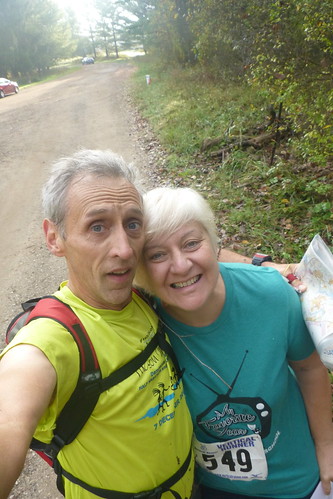 At 2 hours into the race, stepped on what seemed solid ground, only to reveal itself a booby trap of a thin layer of root system covered with some leaves and dirt, and hollow below it. One leg went all the way through it, and the other leg hit the edge of the hole, bruised and painful for the rest of the race. Rogaining is a constant reminder on the dangers of outdoor mishaps. Mishap #2 was losing the mouth piece of the CamelBak, mishap #3 was forgetting the thumb compass at a rest stop and finding out about it 300 meters later. 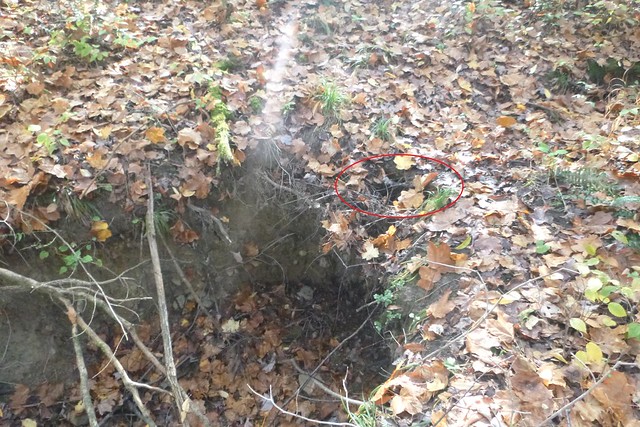 At 2.5 hours into the race, found myself into another running racing event called Viking Dash 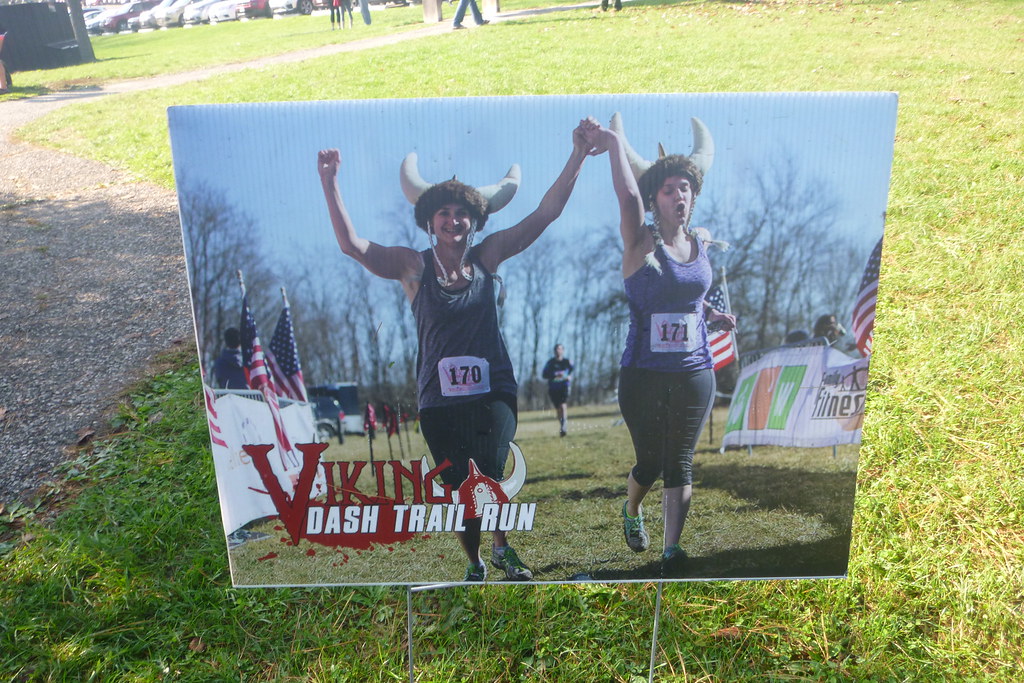 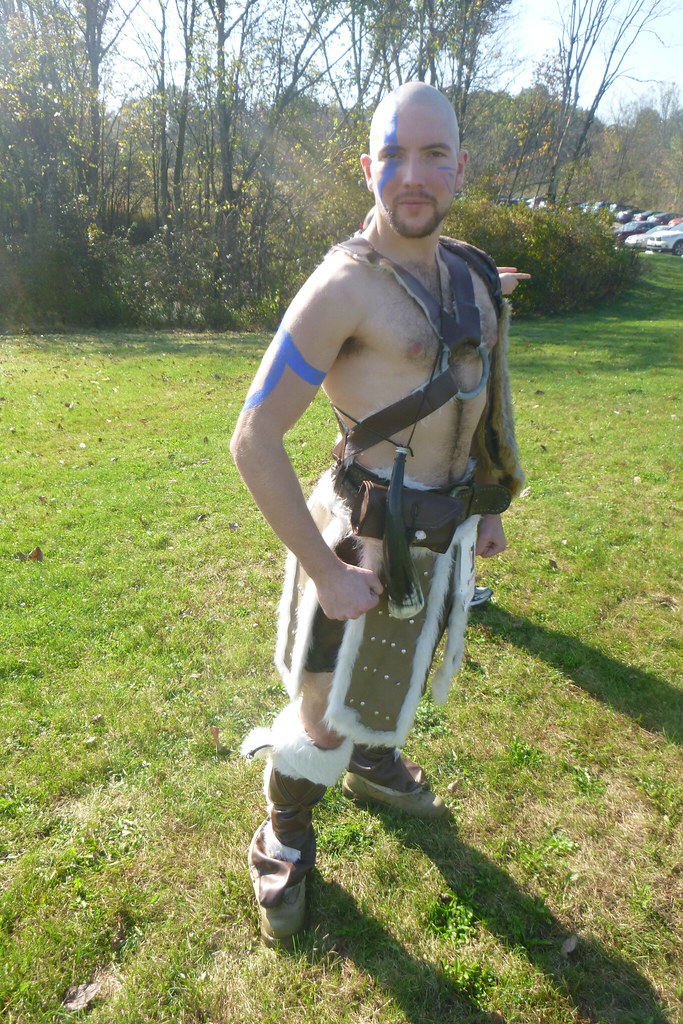 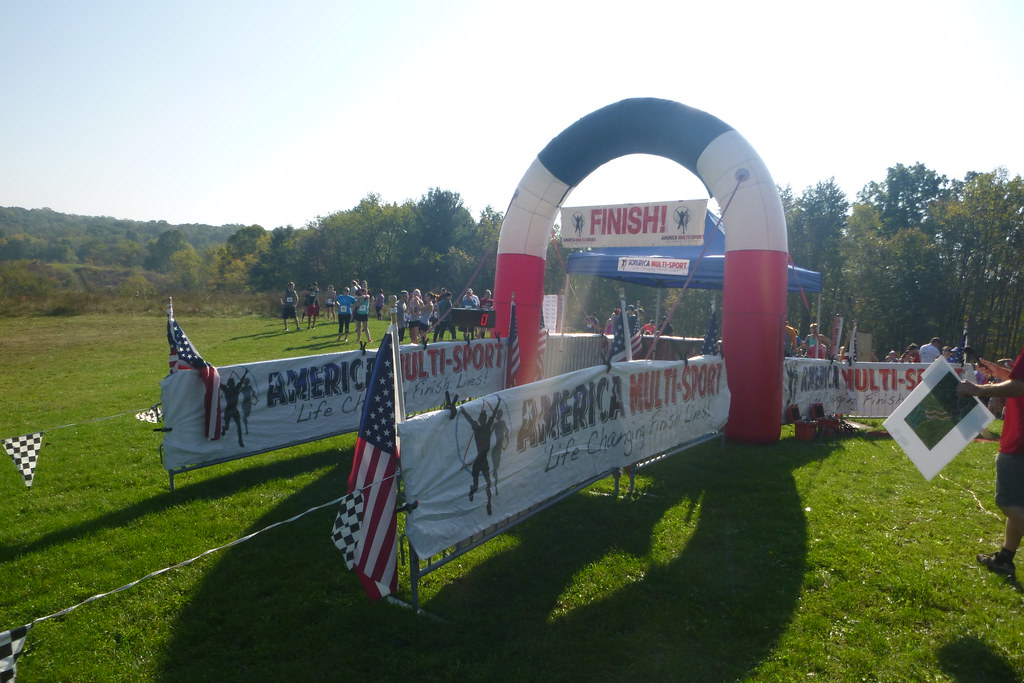 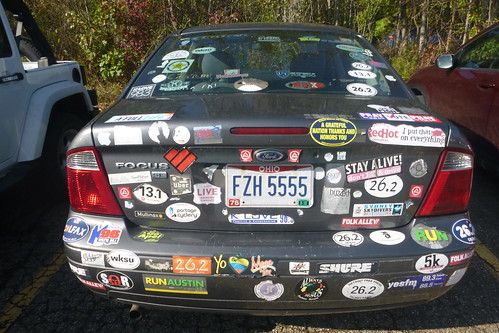 At 2h45m, find a control that is misplaced. Luckily the bright white 1-gallon plastic water jugs will reveal its position to all competitorrs 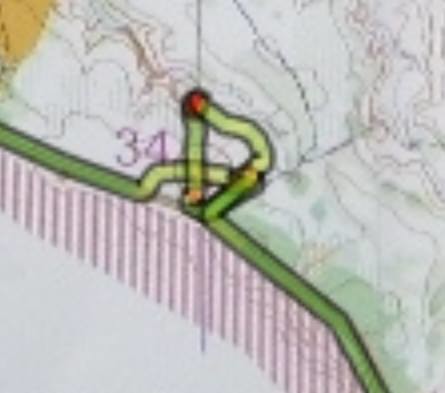 Along the course on the east end of the map, intersected with a team of running rogainers 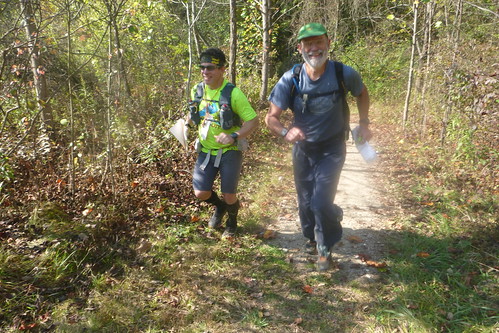 Made it to the Winking Lizard Tavern by 3:15 PM, location marked on the map with a specially-designed map symbol, and walked in to see who was in. Saw a group in costume who said they participated at some Super Hero event 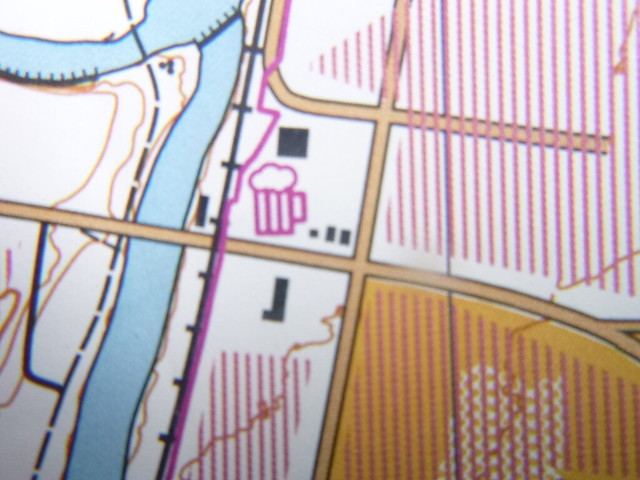 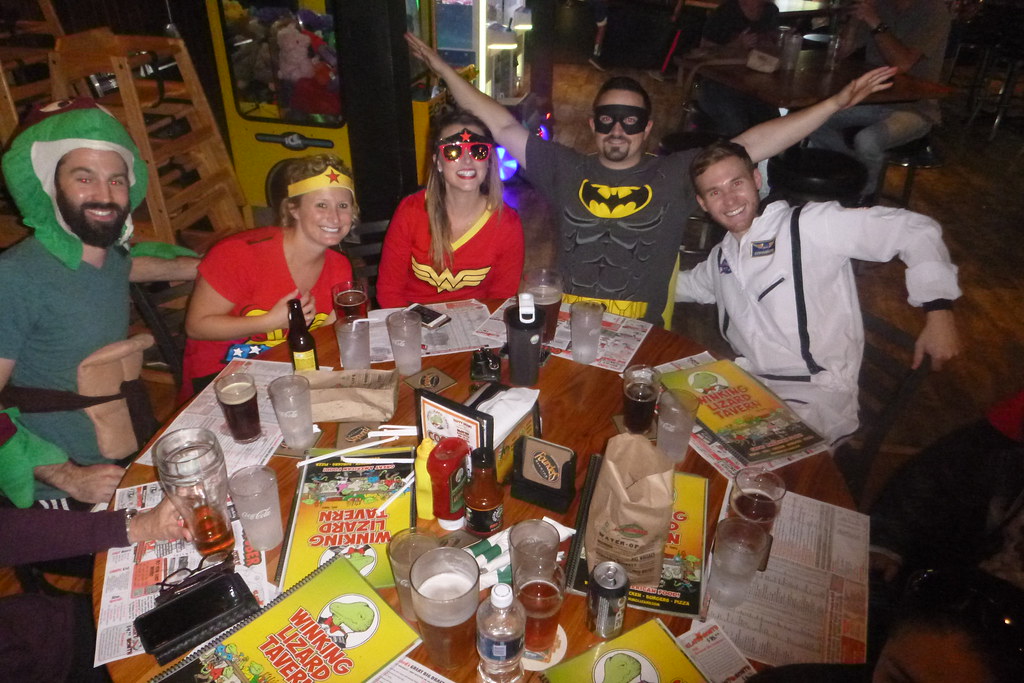 In the sudden crowd of tourists and civilization that this Rogaine intersected, heard being called by name from some folks in a moving vehicle. Apparently I got recognized, identified, called on, and game for roadside socializing. Good seeing Wind Tunnel. Sherpes is E-V-E-R-Y-W-H-E-R-E ... 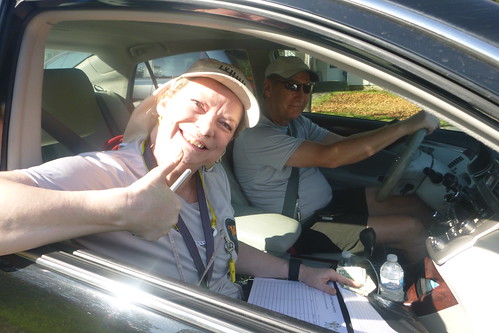 In a rogaine, one must pack water and high-energy food. Looks like this bee honey was available on the course ... The paper message on the table says ...
"Honey is raw and unheated, i prractice natural beekeeping methods (...)
pausterize the honey to retain protein benefits in pollen, crystallization is natural
If liquid honey is desired, place jar in a bowl of hot water to warm.
Enjoy! I keep my hives at the family farm in Leroy Township, Lake county.
- Josh
Prices
$6 - 8 oz mazon jar
( )- 8 oz decorative bottle
( )- quart bottle (32 oz) " 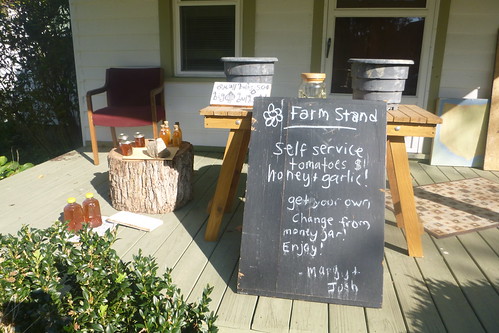 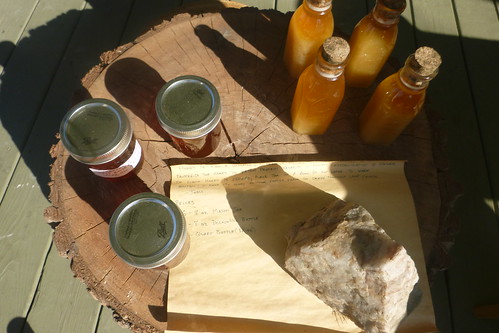 ... and Lupus in Fabula, here we are, in an official event called the Python, and there it was, another python... 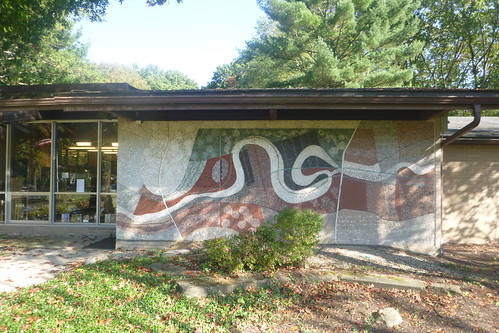 On the west part, found a man-made feature that looked like a small springhouse, that was not on the map. Later, upon seeing the photos, the mapper asked me where it was. Couldn't remember exactly where it was, but from correlating the photo timestamp with the GPS track, and applying a 6min47sec correction given that the two systems were time unsynched, did my best to infer its location. As celestial and astronomical bodies such as comets, asteroids and craters get named by their discoverers, I'm naming this one Termeae frigidarium raccoongainesis or portali sherpesus ipogeum 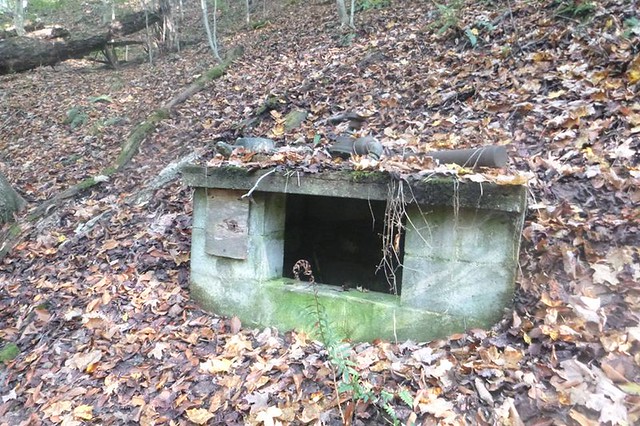 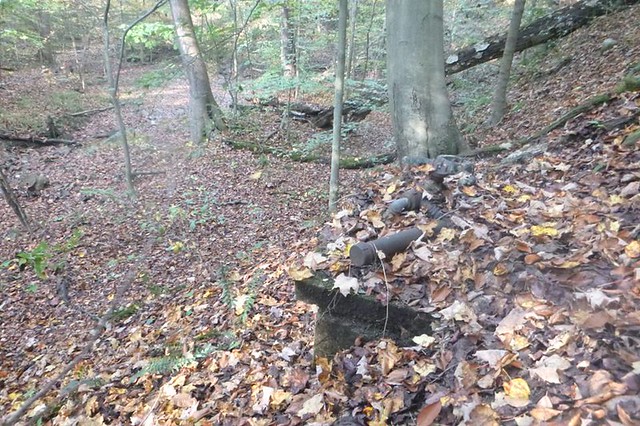 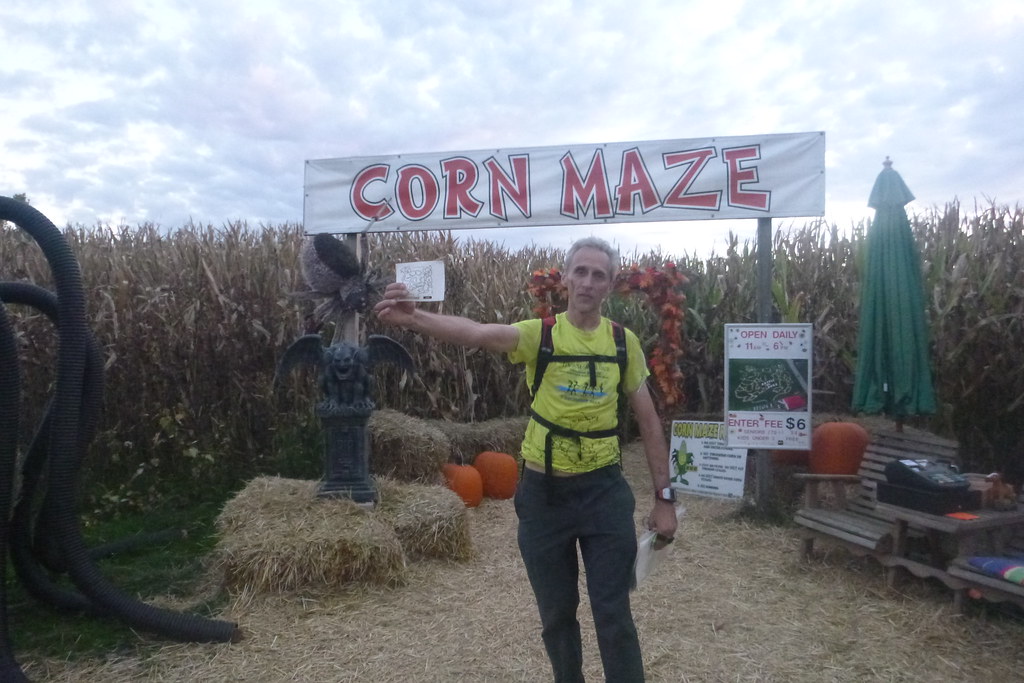 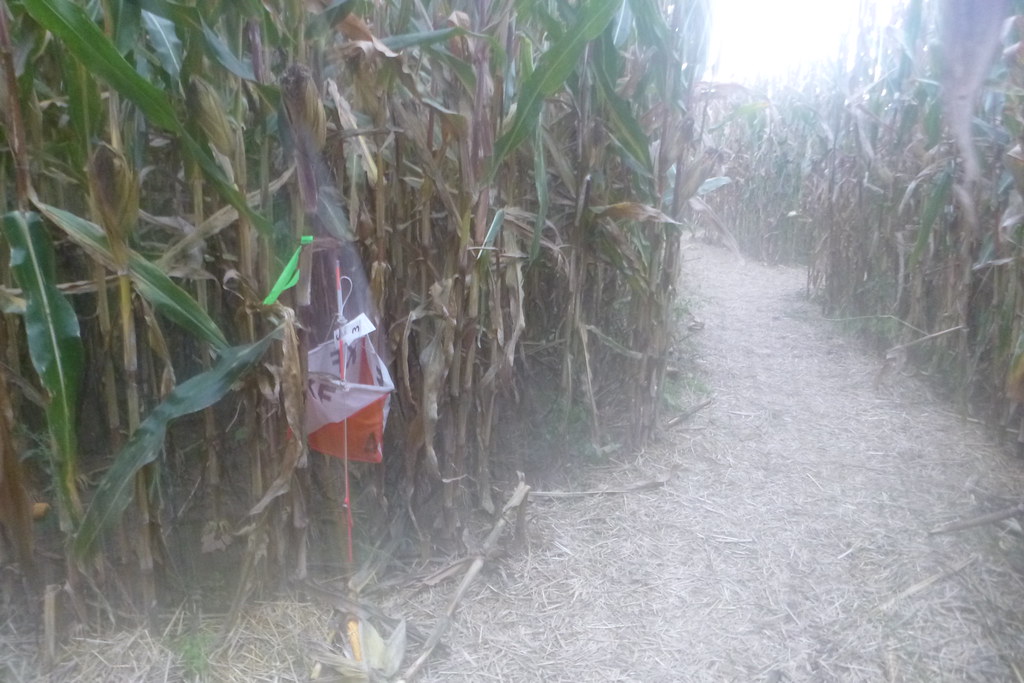 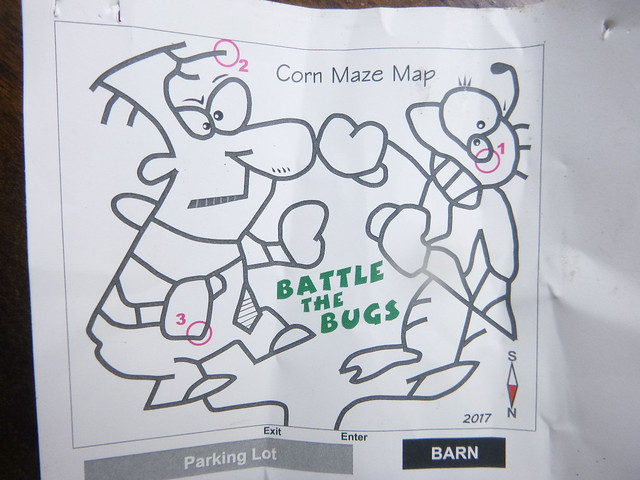 Outside the corn maze and the farm chic tourist trap, heard some quaint foreign language and got talking to a family from Brazil, with whom talked about Paulo Roberto Falcão and other greats of the Seleção. You never know who end up knowing during a rogaining competition in progress... 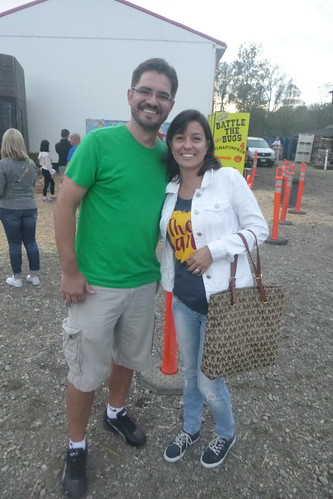 My would-be-last found control would have been 33, but in darkness of 7:25 PM, looks like I went up the wrong spur, and never found it. 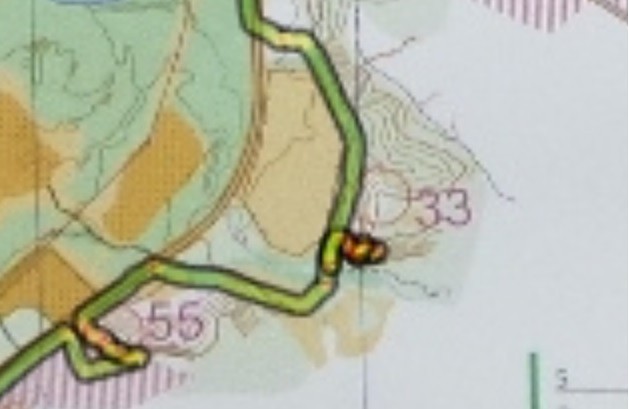 My strategy was to avoid finding controls in the hour of darkness at the end, and planned to spend that last hour on a long run on paved road coming from the corn maze. Last year's event was in Camp Manatoc, and with that location, would have made it back in time. But Camp Butler is a bit of extra distance, and thus got late. GPS says I traveled 62 km and the legs definitely felt it. Maybe next year I should just give up finding the low pointers and just stick to the controls worth 20+, and save myself some distance. The only detriment in this event is that the availability of rogainable terrain, most of it located central and east, and some located west and a bit located northcentral, requires some long distances to be covered on paved roads with vehicular traffic in order to visit the different areas of clustered controls. 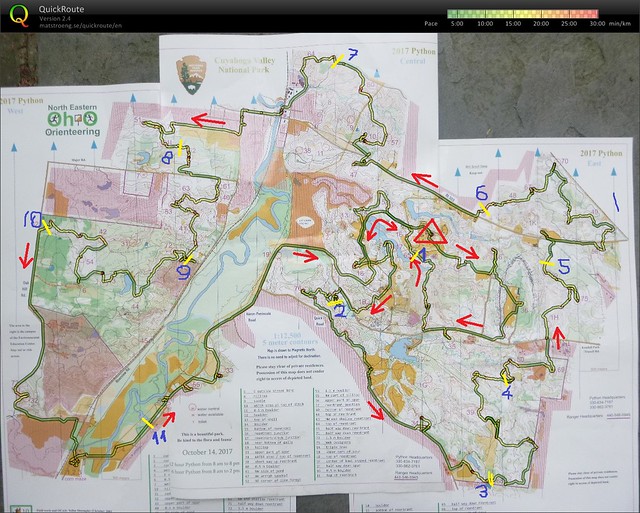 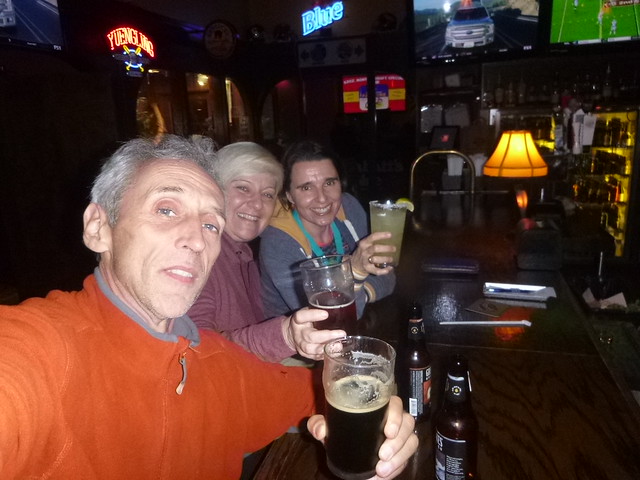