Drove Friday from Pittsburgh, Pennsylvania, to Corning, New York, on the day before with Yaki Barak ("SnailTrail") were we stayed at a motel. For dinner, we went to the pedestrial-social three block long stretch of Market St in downtown Corning. We could not agree on one restaurant, so we conveniently split on eating a quick dinner in two Italian food eateries that were one block apart from each other. 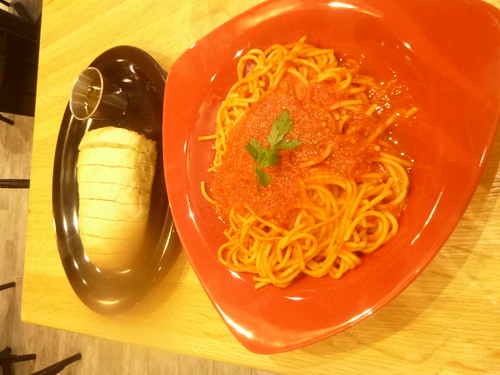 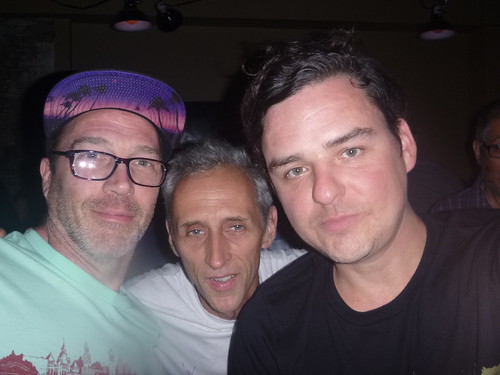 After a good night sleep and breakfast on Saturday morning, the maps for the rogaine were handed out at 10 AM on Saturday, with a start at exactly noon. Getting ready, realized that between leaving the motel and arriving at the event location, my favorite racing tee went MIA, and thus improvised a replacement from cutting up a long sleeve tee. 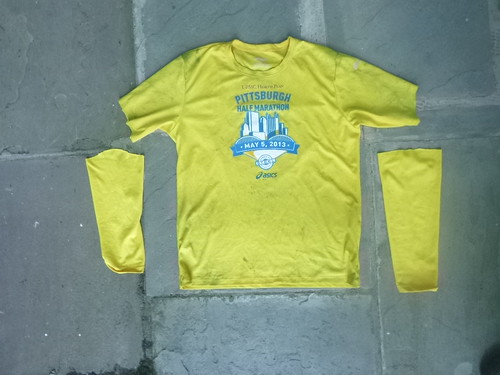 Teamed up with Frank Boscoe of Empire O and called our team, for lack of creativity, simply "Raccoongainers", which this year has been used to name a team that participated at the 2017 European Rogaining Championship in San Giminiano, Italy (me and Olga Huber of Rochester O), and again at the Lucky 7 rogaine by DVOA two weeks ago (me and Yaki Barak). Frank strongly advocated for an initial short and lightweight fast loop to grab the northern and northeastern controls, and after some hesitation in which I countered "but it makes it a great game finish and why not leave it for last", he kept replying that after 20 hours, one is spent and out of energy. Plus, that cluster was collectively many points, many more than the remote southwestern area. So I was sold. We did the short loop at the beginning of the event. It turned out to be a great move. 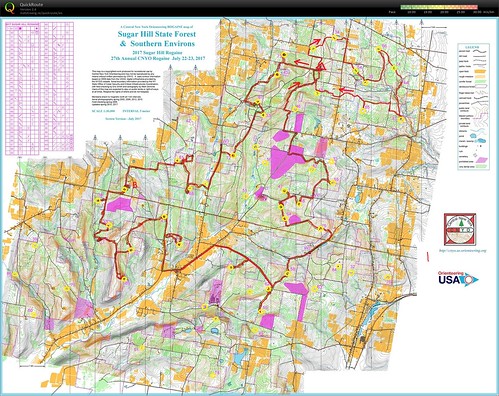 And off we went. Just east of 34, we hit a really dense patch of vegetation, which shows in the red color of the GPS track. A bad start. 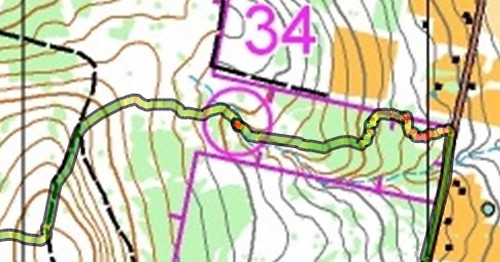 Tangled up, heard some brush noise pretty close, and it was another team stuck in the knotted bushes 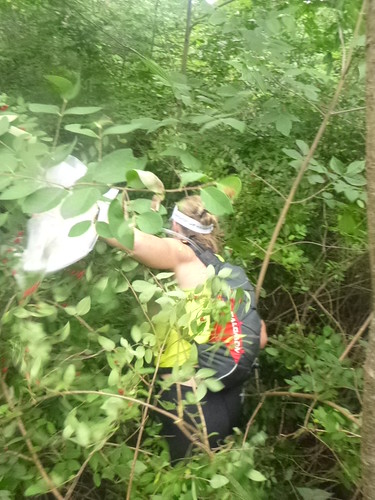 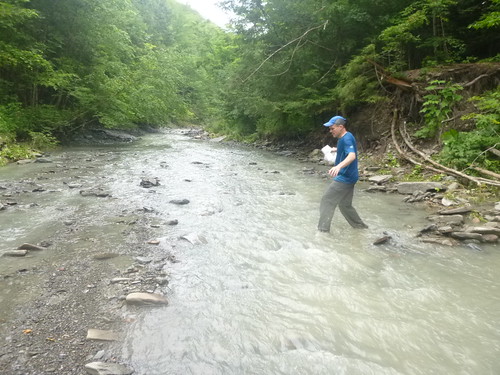 Some beautiful ponds in evergreen forests 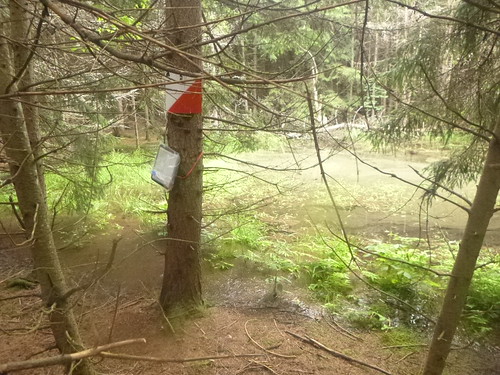 We finished our 19.2 km loop in 4 hours. Changed shoes and socks, maybe a clean shirt as well, ate food, packed up, and left for the remaining 19 hours and 45 minutes, this time headed southwest for a counter-clockwise sequence. 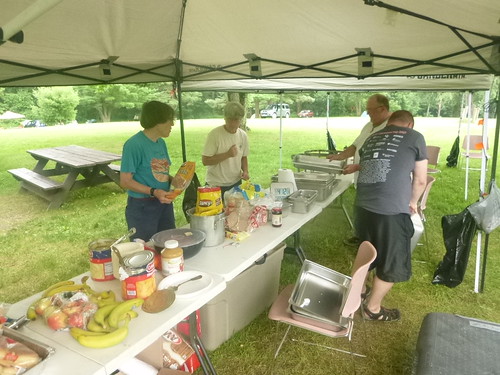 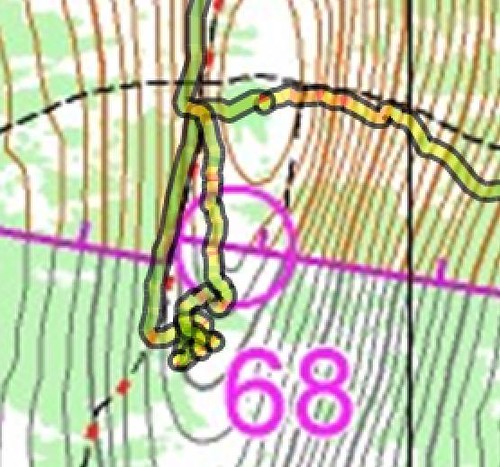 At the following control, major snafu. This time it wasn't owr fault, but rather a trail that wasn't accurately represented on the map. The snowmobile trail we found had a different feel and direction, often flat and at one point, touching the parkland boundary, something that the trail on the map only did on a boundary corner. Since we were at a complete loss at where we were, we decided it was best to invest some time and follow trail until we recognized a feature so that we could re-establish map contact. When we found the corner and the Finger Lakes Trail, we knew where we were, and attempted again to find the control, but this time using terrain and water features, instead of trail. We failed again, but we then bumped into the NYARA team (12-hour division) and they hinted that they did find the control, and they were coming from the West of us, so that is where we headed and immediately recognized the features that lead us to the control. 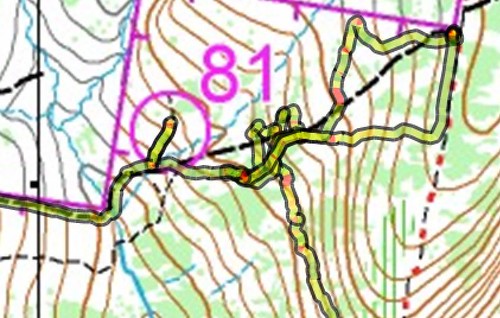 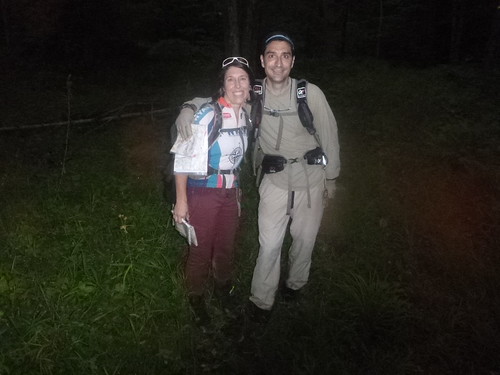 At 8:30 PM, while walking on a dirt road, we found a humanoid settlement, and after a brief social exchange with the locals, got invited in for food and beverages 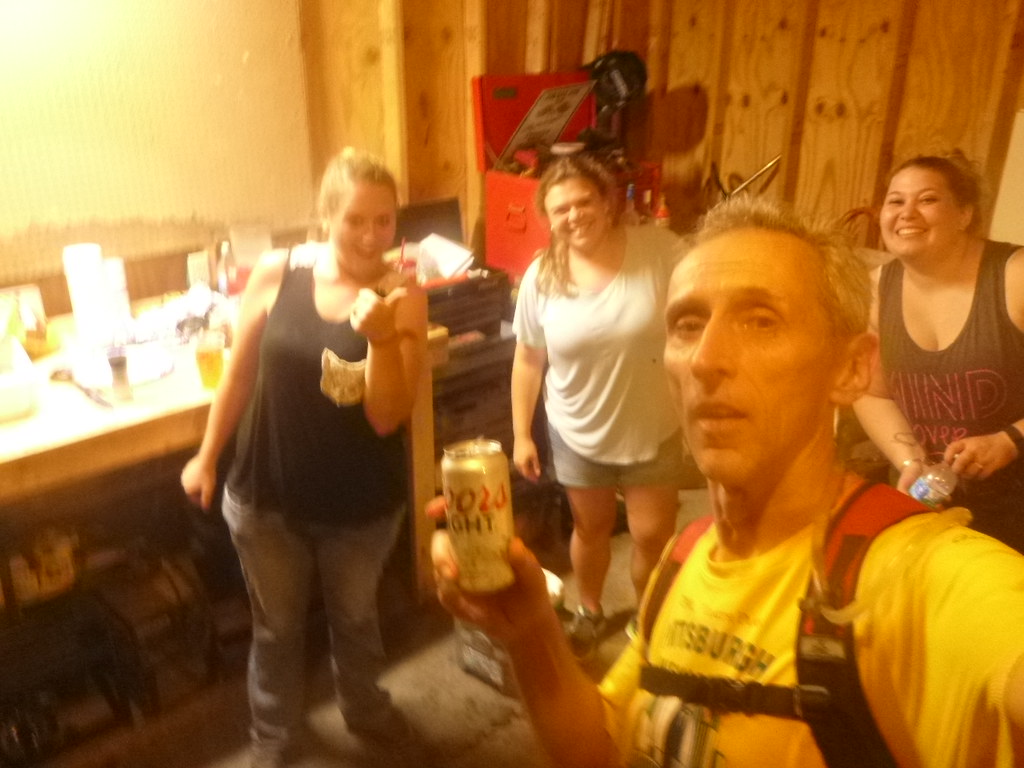 CP 50 was the first control to be found in darkness, and it turned out to be a challenge. Upon finding a group of anthills and an unmarked large trail, almost a jeepable road, we got distracted and started looking for the control, not finding it. We then chose the parkland border corner as attackpoint, and set to find it, but failed. We bumped into a small stream, and chose to follow it until it intersected with the wide powerline clearing, and from there, used a stream as attackpoint and from there, found the control. Looks like we were not more than 35 meters away earlier. 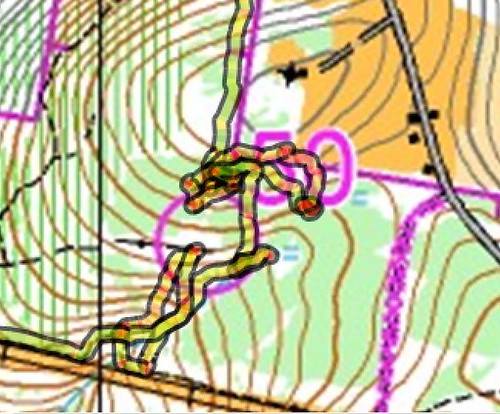 CP 80 was a complete disaster, our Dunkirk. Given the poor experience we had earlier with night-time navigation, we chose to use very identifiable near attackpoints. So we chose the upper part of a small stream to find the ride. Failed to find the control. So we descend to the pond and beaver dam and attack from there. Failed again, getting tangled in the deep and thick vegetation. Totally exhausted, I call for abandonment. We just couldn't see it, and the brush was just too dense. It felt like a defeat, and we were starving for some wins, to pickup and raise the morale. 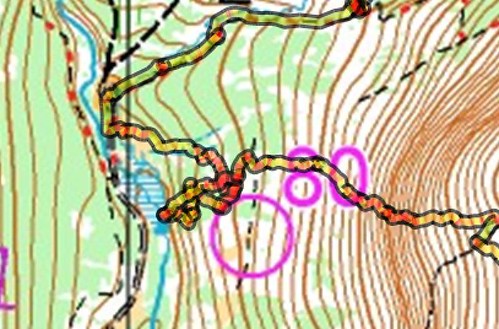 Next was 69, and it seemed perfect for night time navigation. Still shell-shocked from the defeat at 80, we couldn't fail again. The long trail was an easy walk, but it was too long, and hours later we would judge ourselves as making this choice on the route as a mistake, as it absorbed much precious time, for just a 60-pointer. Upon leaving trail, we found deep and dense bushes, having to pivot bodies over fallen tree trunks in the deep brush. After some circling and backtracking, we eventually got to it. But we were tired, and it didn't seem worth it. 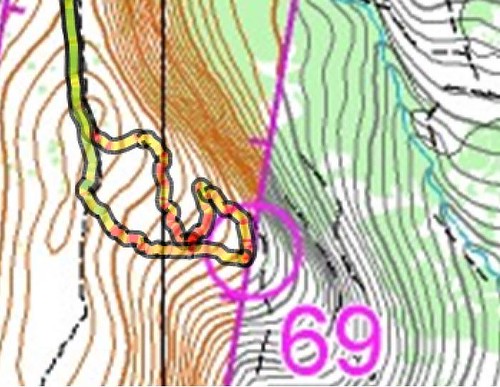 Despite the bad experiences so far in our night time finds, we got our hopes up again, and decided to go for 71, maybe allured by the mysteriousness of it, being inside an enclave surrounded by private land and touching other public land only by its corner. So we set up looking for that corner, expecting to find the parkland border blazes or private land posted signage, but not finding either, we did end up in private land for a short bit. On the way back, we did find the corner, a tree with both a posted sign and a yellow blaze. 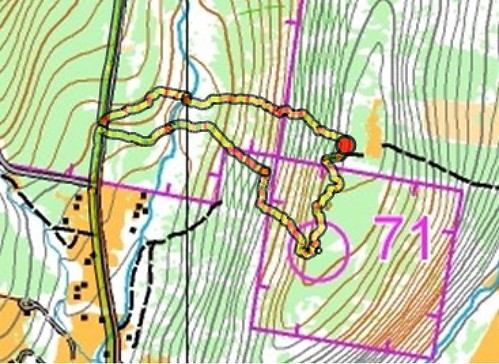 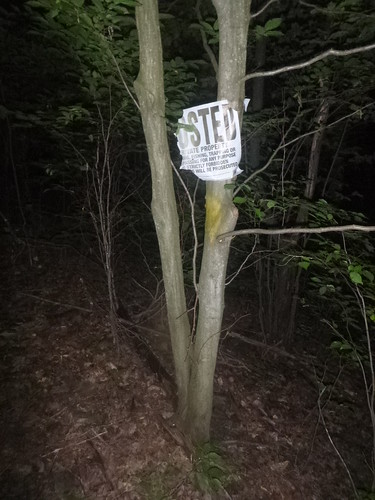 Even in daylight we made our mistakes, this one at 50, looking for a hilltop, and failing on the first pass, repeated by using the road bend nearby as attackpoint 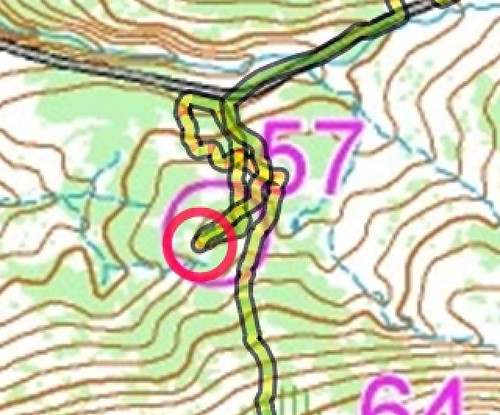 By 10:45 AM, upon reaching control 55, we realized how badly we estimated the time and labor needed to reach the finish, and abandoned our intent of finding 82 and 33, and eventually even 46. 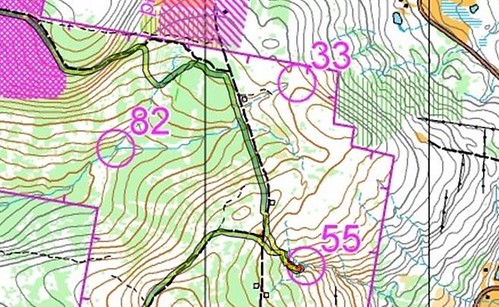 We walked/ran the last 8.0 km in 1h14m, givng up valuable points. At 45 minutes fron the finish, we uttered that we shall arrive 5 minutes late, according to some quick estimation. Indeed, that is exactly what happened. Frank said "this was the worst rogaine finish". I disagree. It was the most exciting. It was not my intent to run this 24-hr rogaine, but walk it. And yet, after 23 hours on the wooded slopes, tired and broken, we found the will to run the last hour. Crazy. Total distance in 24:04:23, 93.4 km.

To those traveled from far and away to reach this event, it is now understood why. A small but loyal devoted clan of people, addicted to find the orange-and-white flags scattered in the bush, daytime or night time, dry land or wet land. At the finish, we were served with cooked foods and stories from others on what they found and specially what they did not find. Mutual displays of body parts, showing scars from overcoming vegetation or rugged terrain along creeks flowing in deep gorges. 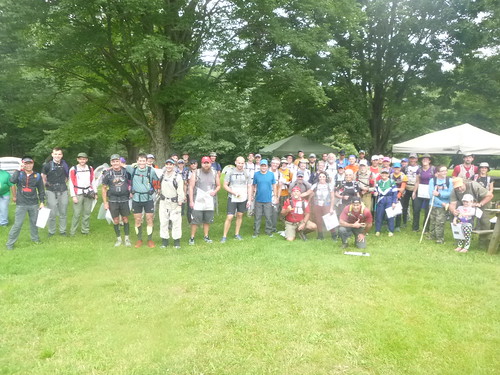 And to those that have been around these parts, it is always a pleasure to see again Gordon, the beaver rogaining mascot of the GHOSLO team. 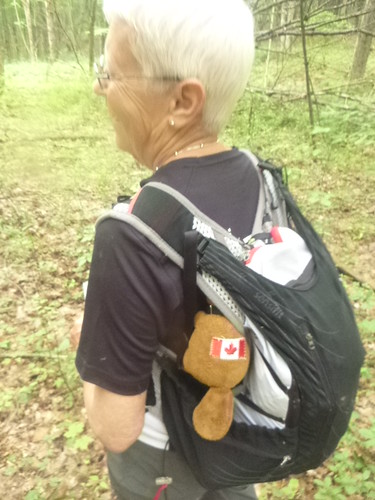 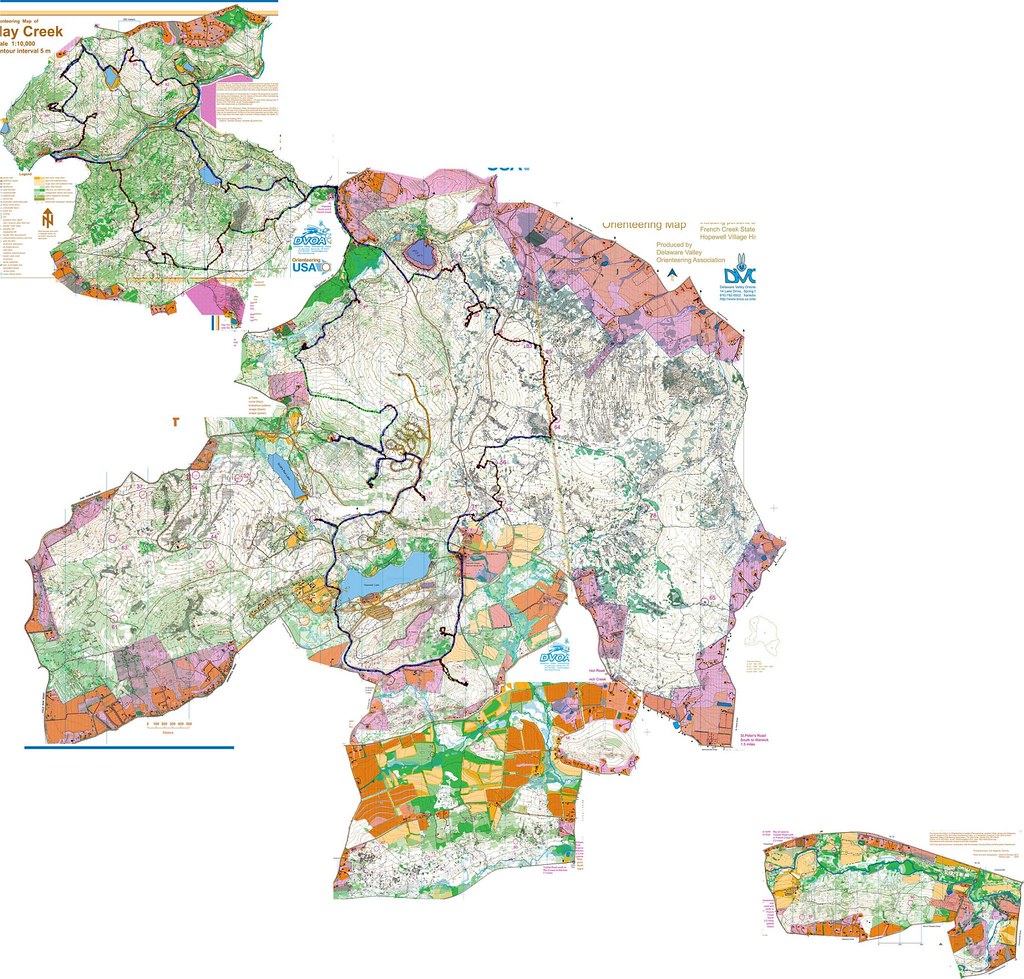 Had alot of fun in this eastern Pennsylvania organized event. Organizers provided seven paper printed maps on paper of various orienteering maps, five of them in 1:10000 scale and two in 1:15000 scale. There were 50 electronic checkpoints placed, all with SportIdent (SI card) support equipment.

The day before, on Friday evening, there was one inch of downpour and the ground was wet and muddy. On Saturday, the day was hot and humid, but the ground wasn't terribly muddy.

We decided that our game plan was to go clockwise, and forget the remote and separate section on the far lower southeast corner, reachable only by a long walk/run on paved road.

In the northwest corner of the overall area in the Hay Creek area, we spent a considerable time of the overall event, almost four hours, so we knew that we are going to take short cuts on the rest of the planned route.

Many thanks to the DVOA folks for organizing this event.