Letchworth State Park, NY. From the Trailside parking lot, towards Inspiration Point to the start of the 2022 Billygoat.

2022 Kid Billygoat in Letchworth State Park, NY. The Rochester Orienteering Club set a event. The terrain was sometimes technically easy and sometimes physically hard. There was pretty good attendance. I ran the Kid since I'm still having knee issues and am not in shape enough where I felt I should do more. To do more would have risked further injury like I did in Ohio at the Flying Pig. I navigated okay but there were a number of places that I could have improved my overall time.

S-1 - As I flipped over my map and looked at the first leg, I went out of the parking lot down the road starting out. I forgot that the start triangle was further in. I stopped on the road thinking about whether or not I should go down to the start triangle but I was already past it. Nadezhda Popova passed me when I stopped. Eventually I went ahead and went around the out of bounds area on the north side. I took trails almost to #2 but cut south at an intersection (the woods looked too green). Had I not been flustered about not going to the start triangle, I might have used the time on the trail and road to look ahead at the course for a control to skip. As it was I plowed south, saw lots of people who had gone straight, then dropped down to #1. Bridget Hall was coming up as I was going down.

1-2 - I realized as I was climbing out of the hole from #1, that I should have skipped it. If I had, I could have saved a 3-4 minutes more. As I ran, I could see no other good skips ahead. I did see skipping #4 as an obvious possibility but knew it wouldn't save me much time. Further inspection might have revealed #9 as a good skip. After climbing up from #1, I ran straight as I could around the green, rather than hug the edge of the drop-off. The loop road being grassed-over didn't throw me off. I spotted the knoll and went to the correct side efficiently.

2-3 - I went basically straight, using the grassy areas, then dropping to the roads. I cut corners and passed others who had skipped #1. I spiked the control, but didn't see the rootstock until nearer than anticipated.

3-5 - I didn't see the trail north of #3. That's possibly because someone was close behind me at #3, and I just kept moving. I had decided while climbing that it'd be best to skip #4 so I headed to #5. I hit the road south of the parking area and got confuse when I didn't seen the trailhead. I ran on the grass on the west side of the road and on the left side of the pond getting to the big field. I angled across to get around the green then climbed at a walk. I noted my location crossing the trails but never used them as I approached the control from the east/southeast. The stream bends let me adjust to spike it.

4-5 - After leaveing #5, I saw Joe Barrett come through in the lead heading to control JD. Others were about 20-30 seconds behind him. I came up a spur and eventually got to the powerline. Running on that was good. I got around the small marshes along the way, well. At the end of the power line trail, it was too easy to use the trail to get to the pond. All of this leg just kept us away from the out of bounds areas.

6-7 - After crossing the bridge, I got passed by the lead Billygoat runners but didn't see Joe Barrett this time. I took trails to an intersection just east/northeast of #7. At the drop-off, I was thinking the setter put the control down over the edge of the drop-off, and that we'd need to come back up like at #1. Seeing the reentrant but not the control. I hesitated and shifted position, losing 30 seconds. I didn't want to go down unless I could see the control that I knew would be there. Finally I dropped a little and could see being behind a tree so I went there.

7-8 - With it still in my head that I'd need to go back up like at #1, I did. The climb was steep enough that I focused on the ground below my feet rather than look at the map. Someone else dropped while I climbed. At the top, I realized and shouted out that I'd done a 180! I descended but lost at least a minute going up and then going down again. Ooof! To make matters worse, I saw a knoll ahead and went to it without finding the control. I adjusted to the left some more and soon found behind the second knoll, as was mapped.

8-9 - I closed in on the guy who passed me while I had done a 180 leaving #7. He moved more to the right while I kept my bearing and read contours keeping me to the left of him. Since it was gradually downhill, I moved well. I also spiked the control.

9-10 - At this point, there was no way but to go up. I should have gotten control #4 before going to #5, then skipped #9. I went left of straight, reading contours and the intermittent trail below the top of the drop-off. When I got to the top, I hit the trail intersection that I wanted perfectly. It was a good thing that I had because it at the trailhead it was hard to recognize. I cut some corners on the trail intersections ahead to get to #10 pretty well. However in the circle I was initially looking on the left side of the trail.

10-11 - Coming from the corner of the lake to #10, I kept going in the same direction, basically going right of straight. Going left of straight along the pond seemed like it'd be longer. In retrospect, the right side dropped more and I had to climb back up it. AP shows me losing 30 seconds because of this.

11-F -Through the trees and into the fields. I didn't try to run fast down the grass because I didn't want to risk aggravating injury to my right knee further,

I definitely could have gone farther today. I got 2nd but most of the people running the Kid were older than me. I felt that I could have been much better with my navigation. Taking my time to make decisions would have helped. 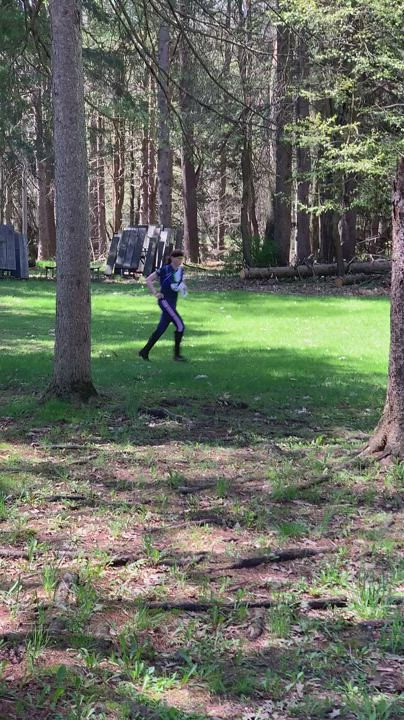 Penn State Campus, State College, PA. Max, Peggy, David Onkst, and I walked around the Penn State Campus so that Max could get continue to form ideas about what colleges he might apply to next fall. It was raining and windy initially but it became more pleasant. I hadn't been feeling that great after sitting at my desk so long the last couple of days (instead of working out) and the walk was just what I needed. Our visit coincidentally coincided with graduations. Most of the ceremonies for different colleges in the university had just ended. Grads and their families were walking around in all of their finery. We stopped at the Nittany Lion sculpture to take pictures--this is the most photographed spot on campus. Initially there was a long line but when we swung past the second time there was just one person and his overzealous mom taking slow pictures. We heard the next day Sunday, May 8th) that the sculpture had been vandalized at night. Someone broke off an ear and poured red paint on it. 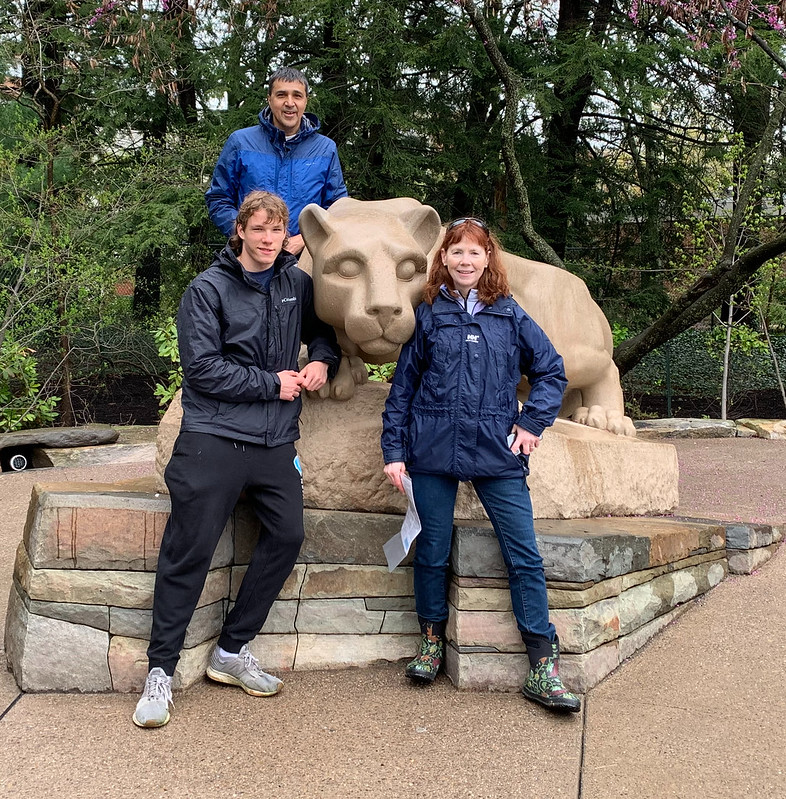 From Northfield Rd., to Charlcotte Rd., to Hampden Ln., to Wilson Ln., to Honeywell Ln., to Cornish Rd., to Glenbrook Rd., to the Elm St. Trail, to Exfair Rd., to Hampden Ln., to Exeter Rd., to Battery Ln., to Park Ln., to Custer Rd., to Northfield Rd. Peggy and I got to walk and talk by ourselves today :) My right knee hurt at first but got much better. It was a little humid and in the 70s F.

From Cedar Ln., out and back on the Rock Creek Trail to E. Stan Hope Rd. On the way back, my left leg was getting more tired than my right. I think I'd been favoring it since my right knee hurts. Today, my knee didn't hurt so much except for starting out. I started pushing more on my right leg to compensate for the fatigue and my pace improved. Even though there was a very gradual gain in elevation returning, I was faster coming back.