QOC: Mason Neck State Park, VA. After dropping Max off at Fairfax HS, and leaving him alone (he had his club and coach to hang out with but has only known them for a short while), Samantha and I got to this park. I rushed to get out on the course, and to have enough time to finish. With it being hot, in the mid 80s F, I wasn't that enthusiastic about doing the Blue course in this often difficult area, but thinking of the upcoming Billygoat race made it easy to stick to my plan.

I actually felt like I was running okay in the early part of the race--not so fast, but not slow. My accuracy suffered. The park does has 5ft. contours, and even then they are widely spaced. Most of the features used for controls are root stocks or pits. Sid Sach is old school in his course setting. Though most controls were where they should have been, I came across at least 2 that I'm sure were incorrect. Some I felt were hung in the general area but I'd need to go back to be sure. More than one mapped root stock with a control on it had a trunk pointing in a different direction than mapped. I made so many mistakes today, that AP shows mistakes much smaller than they actually were, according to GPS.

S-1 - I though very briefly about using the trail early, but instead, I went straight until I hit it at the bridge. I could see it from the end of the bridge.

1-2 - I went around on the trail and thought about cutting across the top end of the marsh. I thought the water might be lower since other parks around DC had been drier. However, the water in this marsh was mapped as it appeared today. Having gone around, I ended up well left of straight. I attacked off of the dot knoll next to the nearest trail but still ended up north (left of the control). I probably lost 10 seconds.

2-3 - I took the road and started counting telephone poles after the pavement started. It wasn't easy for my eyes to see them on the run. I did cut in where the power line crossed the road. This was a bit early and may have slowed me down too much. I also was too close to the road when I'd gotten the right distance (by feel, not by counting). I didn't see any evidence of the mapped marsh but saw the green to my left. I backtracked very slightly to the control.

3-4 - I went straight and for a little while I was confusing going to #13 with going to #4. My GPS track shows that I was right on top of #13 but I didn't see it. Having gotten through the green trying to keep a straight bearing, I was able to read contours and stop at the reentrant #4 was in. I had ended up east of it. My GPS track shows I lost 20 seconds.

4-5 - I ran straight. After going over the last hill, I was a little to the right. I had forgotten to pickup control descriptions and rather than open my map, I went of a thought in my head that the control was on a rootstock. I turned south where I could see one and then checked the map. I corrected quickly but lost 1:10 minutes.

5-6 - I'd caught another younger but regular runner (I forget his name--:() at #5. I took off ahead of him but could hear him behind me for a while. This leg was fairly flat. I should have realized I was to the right after crossing the bicycle trail near a bend but I didn't focus on it. After crossing the road, I got to within sight of a reentrant, and thought I could see another forming a flattish saddle, much like where the control was. However, I never ran up to the reentrant on my right. I presumed it to be the one just east of #6 but I was actually seeing the one SE of #6. I did a loop checking a rootstock and scratching my head figuratively. As the other guy came through and went to the reentrant I could see from a distance, he went on. I realize my error then and went on to the control. I think I got there a little after the other guy. I'd lost 2:10 according to my GPS.

6-7 - I led off, away from the other guy I'd first seen at #5. My route took me to cross reentrants and hug the marsh. I went along the edge of another to get close, but when I attacked, I missed--not by far according to GPS. However my head wasn't thinking straight at this point. I went on much farther than I should have. I crossed the unmapped trail, and to the steeper parts of the next reentrant before turning back. GPS shows I lost 3:12 minutes.

7-8 - Much chagrinned from my early mistakes and getting tired, I was more careful going to #8. I used the trail to get to the road and crossed in the powerline ride. Attacking from there, I hit it pretty well.

8-9 - I tried going straight on this leg but drifted left. I recognized being in the reentrant with the (dry) streams and corrected well. I just felt slow.

9-10 - Running straight, I felt I hit the area okay. This area has always been difficult. I couldn't see the right rootstock (hardly any if I recall correctly). I came to a dead stop and tried to see the bend in the very shallow reentrant. I thought I did see it to my left so I ran over that way. I saw a large rootstock but it was pointed the wrong way. Eventually I went to it anyway and was surprised to find the control there--Tom Strat, who'd mapped the area, confirmed it was on the wrong rootstock. My GPS track shows I only lost 55 seconds.

10-11 - I drifted left and ran along the ridge. This would have been the proper technique to use--aiming-off--but I hadn't been trying to do that. Getting to the right area after a drop, I still didn't seen the control and rootstock for a few more seconds.

11-12 - I again tried running straight but ended up between the 2 ditches (just right of the control). Reading the map allowed me to correct direction without taking another step :). It was a 30 second error according to GPS.

12-13 - I messed this up pretty good. Running straight, I should have hugged the hillside. Instead I got into the very flat parts of the reentrant junction and made the bad decision to go right, too soon. I went up the reentrant toward #5 and probably got past #5 before realizing it. I tried to correct, taking a stab and going left but I missed wide south. I had sense enough at that point to follow a reentrant down. It took me to #4. Knowing where I was, I corrected well. The control was obscured by slightly thicker woods that didn't rate being shown as light green. An older orienteer whom I'd seen on the course earlier, was coming to the same control from the other direction. My GPS shows a loss of 5 minutes.

13-14 - There wasn't much to attack from unless I took a longer route via trails. The best no trail attack was the marsh tip, 220m SE of the control. I got into the reentrant but seemed to be too high--I saw dry ditch instead of a narrow marsh. I believed I was to far west, so I cut right a bit. There seemed to be an extra trail before I saw some reentrants but I'd actually had gotten well past the control; almost due north of it. I figured it out and corrected. My final attack was off of a distinct 90 degree trail bend north of the control. There were 2 root stocks there and I thought briefly that the control was hung on the wrong one. Maybe it was okay but my overall loss of time on this leg was 1:30 minutes.

14-15 - I'd gotten to control #14 right about the time that Kathleen Lennon was leaving it (coming from another direction). I ran straight while Kathleen seemingly took trails around. I could see her parallel to me after I'd passed her and slowed. I wasn't seeing the mapped knolls. I was actually a little left of where I should have been. I cut more left and got confused when seeing the road. Meanwhile Kathleen was going straighter. I cut northwest paralleling the road and saw the control. Kathleen was closer. I got there just after her. I estimate a 30 seconds time loss.

15-F - I bashed out and passed Kathleen as I got onto the road. My sprint in wasn't very energetic looking but I did try a bit.

I ran 11.5K on a 9K course in which it was logical for most legs to go straight. While AP calculates 8:12 minutes of error, my real error by GPS was 15:35 minutes. That's not so good but the name of the game here for most was keeping errors low. With controls not necessarily always hung correctly, that wasn't easy. Many others had much bigger errors on single controls. More positively, I felt I ran well considering the early heat. I walked a few hills but didn't falter altogether. When finished my blue shirt was looking yellow in places--the pollens were just that thick and dusty.

After my race, I rushed off to see Max run his 200m race at Fairfax HS. There were a lot of kids there--cool to see so many interested in track and field before HS. It didn't seem like Max enjoyed his day there much--too much waiting around. 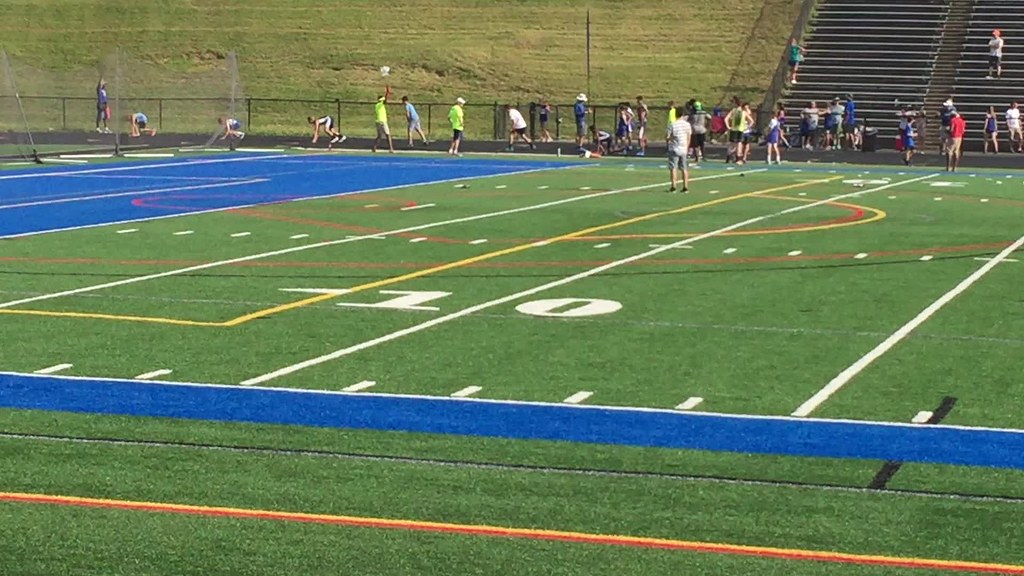