Terrain today was flatter and controls were often on small point features. In general running through the woods was easier but required as much or more attention in some cases. Still a lot of fun, but I think the wide variation in terrain yesterday was my favorite.

The first three were mostly a trail run. I did a face plant on the way to 3, and there was at least one witness. 4 was my biggest mistake, a deep pit in a vague area. I came up just short the first time and had to reattack twice. The rest of the race went well, my biggest problems were with focus and hesitation. I hesitated on the way to 6 but was able to spot the rootstock. 8 I may have made the same mistake as 4 if a West Pointer hadn’t been punching. I passed him on the way to 9 when I jumped into a waist deep stream and he hesitated to find a dryer crossing.

I ate a gu on the trail on the way to 11. I wanted to avoid the green, but ended up drifting high and passed it a little, but was able to correct from a nearby flag. 11-15 was largely a trail run, I also drifted high on 12. After crossing the road at 14 I tried to pick up the pace for the home stretch, which I was mostly successful without making mistakes. The leg 20-21 was long and easy, but I didn’t have enough juice to go as fast as I wanted. I still ran down 2 people though.

Overall I am really happy with today. I was under 10 min/straight line k, which might be a first for me in wooded terrain. While I had more mistakes than the last two days, they were generally smaller. This weekend it was apparent that our recent uptick in running training is paying off in my fitness, and my fitness is paying off in my nav. I think I am less stressed and in a better mental place too, so it’s really nice to see improvement. Last year was a very discouraging year for me, but this year is off to a great start! 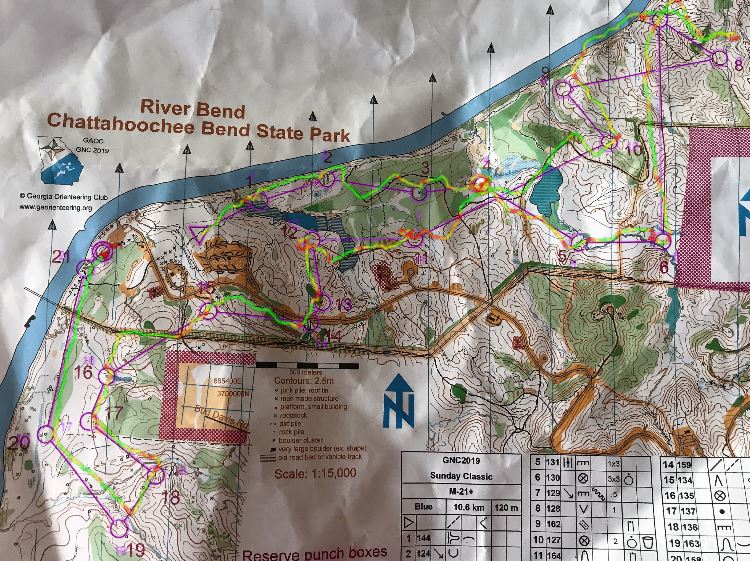 Started at 8 since it was closest to the car. Mostly a nice trot, but I did take some time to explore the bare rock and boulders to get a feel for it. Decided I was overdressed even with the rain due to the humidity, so I ditched the arm sleeves.
11 AM

This was mostly really fun terrain and covered a lot of different stuff- vegetation, boulders, bare rocks, gullies, cliffs, contours. I was feeling the map and staying focused really well. Ultimately this was one of my better classic days ever, so I am super happy about that. I think improved fitness and mindset both play a role.

The first 7 controls was a test of vegetation. I went more straight on some than I probably should have, fighting through some thorns, but I did a good job holding my line and reading the underlying contours. 3 and 4 would have been easy and faster to go around the green. 5 I took the trail around, which was probably unnecessary as it was white woods, but the ride was beautiful.

First mistake was on 7. I climbed a big hill unnecessarily, but didn’t realize It
Until I was half way up. Then I had a long way to go through thorny green and ended up drifting high. I was pacing so I knew when I was near the right distance, but spent some time examining reentrants before realizing my mistake and heading downhill. Luckily I saw the control on my way down without having to re-attack.

8 I approached from the trail and kind of lost track of where I was on it, but I looked over and saw a flag on a knoll, which turned out was mine. 9-11 were some welcome short legs! 12 was my longest leg which I broke down well through the first 2/3. I must have lost focus and ended up drifting high. I realized the terrain didn’t make sense and then spotted a flag, which turned out to be 13, so I corrected quickly.

I was pretty beat so I started relying more on bearings and pace counting for the last few, which actually worked pretty well. I was able to check terrain based on how far I had gone. I picked up a huge deer antler on the way to 14 but it got too heavy to carry so I left it at the flag at 15. Didn’t have a lot of energy to push through the last few, but I was still jogging.

Only two smallish mistakes and about 11:30 per straight line k. Super happy overall. 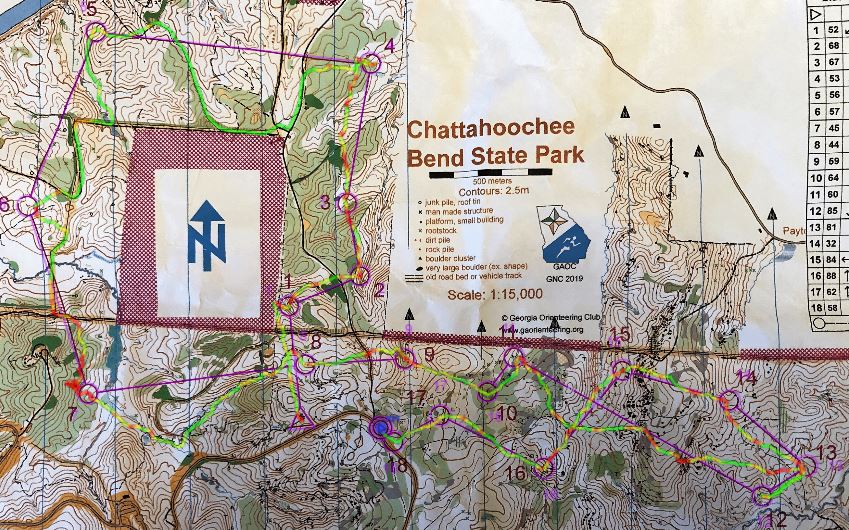 McIntosh Practice course
Did this at a good pace to warm up my legs. I remembered much of it from our previous sprint here 2 years ago.
2 PM

McIntosh blue middle, 16c, 4.9 km, 125m
Started with MIclimber but we headed separate ways immediately. My 2019 goal is to get my confidence back and to Deserve that confidence. I’m starting in a good mental state - I’ve been training well, I feel good, and house stress is off the table.

I started off probably moving more at sprint speed than middle speed, but I felt good and didn’t mess up the first control! I was reading the map well at speed so I figured I would keep up the pace as long as I could. I had a very minor bobble on 5 and then really messed up 8. Eventually I reattacked from the road, and thought I must have been too low. Turns out I was in the right spot the first time and I am not sure how I never saw the flag. Then I miss punched after the reattack, my first MP at an A meet :(. My navigation got sloppier after 8, but I was still moving well and able to correct en route. I had some trouble making sense of 9, but now I believe it is because I wasn’t starting where I thought I was. I had a hard time contouring the last couple controls, but I still found them without trouble, just maybe not the most efficiently.

Overall I am really happy with how I felt physically and even with most of my nav. Even with one big mistake I had a 10 min per straight line km pace which is great. MPing is very disappointing though - I rarely don’t check the code! Hoping to continue to see physical payoffs in the next 2 days. 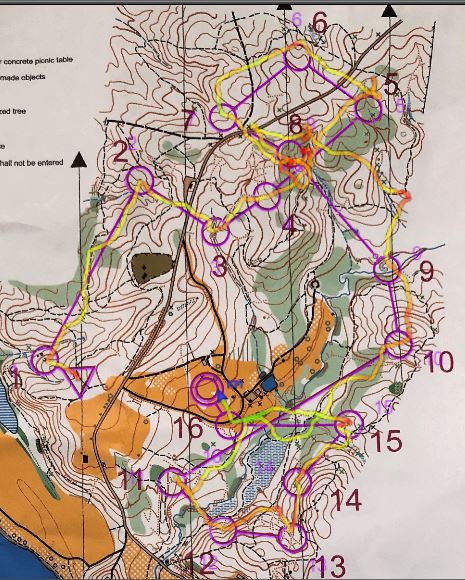 cold, dark and alone. Hard not to push the pace a little bit.