Beautiful runnable woods again. Maybe not quite as nice as yesterday, but still pretty great. Got the control sheet with only 14 controls and knew I was in for some long legs! Normally this would terrify me, but yesterdays long legs actually went pretty well. Kept with the straight line strategy since the woods were so nice. Slightly more climb today so I walked up some hills but kept up a steady jog mostly otherwise. I think this is the best indication of my true abilities for long/classic format - no major blow ups and only 2 errors!! SO i thik im about a 55ish point runner if i can minimize mistakes.

5,6,7 - I didnt feel like I mistaked these, but AP did. Tracks so slight bobbles I suppose

8 - First short leg, I told myself to focus but still ended up over running it and drifting. Luckily i relocated quickly.

12 - SO CLOSE TO THE END. My clean run got in my head, and I saw syd in the woods and got distracted. I must have drifted slightly, and I knew I didnt want to go down the hill, but then I did anyway. Took me a while to find something I could effectively relocate from, but once I did I found it quickly. Stupid mistake, but with otherwise such a clean run I'm not too upset about it. 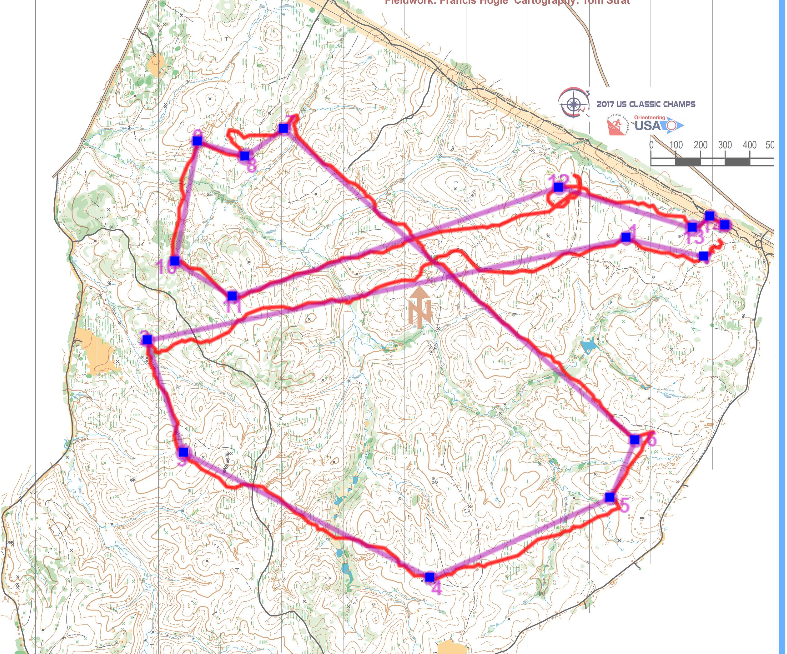 look at those straight tracks!

The woods were some of the nicest white woods I have ever orienteered in! Completely runnable 100% of the time. The terrain reminded me a lot of SMOC maps, although maybe not quite as tricky. Hills were shallow enough that running up and down wasnt an issue either, so I kept up a steady jog probably 90% of the time. It shows up in my pace, which is much faster than normal for a classic/long format for me. I want to say the nav was actually pretty easy, but then its hard to explain all the terrible errors! 20 minutes!

1 - I focused on going out slow to not destroy myself, which I actually did pretty well. But i wasnt in contact with the map, and thought i had crossed a gully that was actully just a shallow reentrant. When i got to the next gully, i thought it was the stream i wanted, and proceeded to run back and forth on it looking for a flag. SO DUMB! Finally corrected off a series of small depressions i found on the map.

2 - had to go straight back across those small depressions, but I drifted and missed them and ended up pretty far west.

3 - hesitated at the first series of knolls, but not too bad. AP didnt count it.

4 - got to a fence with signs that said "warning, demolution area, keep out". The course notes had said these areas were open to us, but its pretty disconcerting to go into something like that, so i follwed the fence and hoped to go around. Eventually I had to head in, but only did so after seeing someone else charge through. Overshot slightly.

5 - lots of unmapped small depressions in this area, so when i drifted i had a hard time correcting to the right one. What a great start - 5 errors in a row!!! I couldnt buy a clean leg! Finally got my head in the game and really cleaned up after this.

9 - had to take a mandatory stream crossing. I dont think i had an error here but AP does

10 - spent too long zig zagging looking for a trail, but they were all leaf covered and very hard to spot. Doing this i realized the woods were great and there was no reason to take the trail. After this I mostly just went straight line without problems, checking in along the way for the long legs.

14 - slight drift, i wouldnt have counted this an error

22 - tried to cut the corner instead of taking the trail across the creek, but this shot me in dark green that pushed me off by about 90 deg. Had a hard time correcting and then figuring out where exactly i was after I did correct.

WAY too many errors, but even so I was able to keep up a good pace the whole time that I am really happy with. I think the terrain was good for me, as the other A meets we've been to this year were killer hills, this was much less physically demanding, but technical. 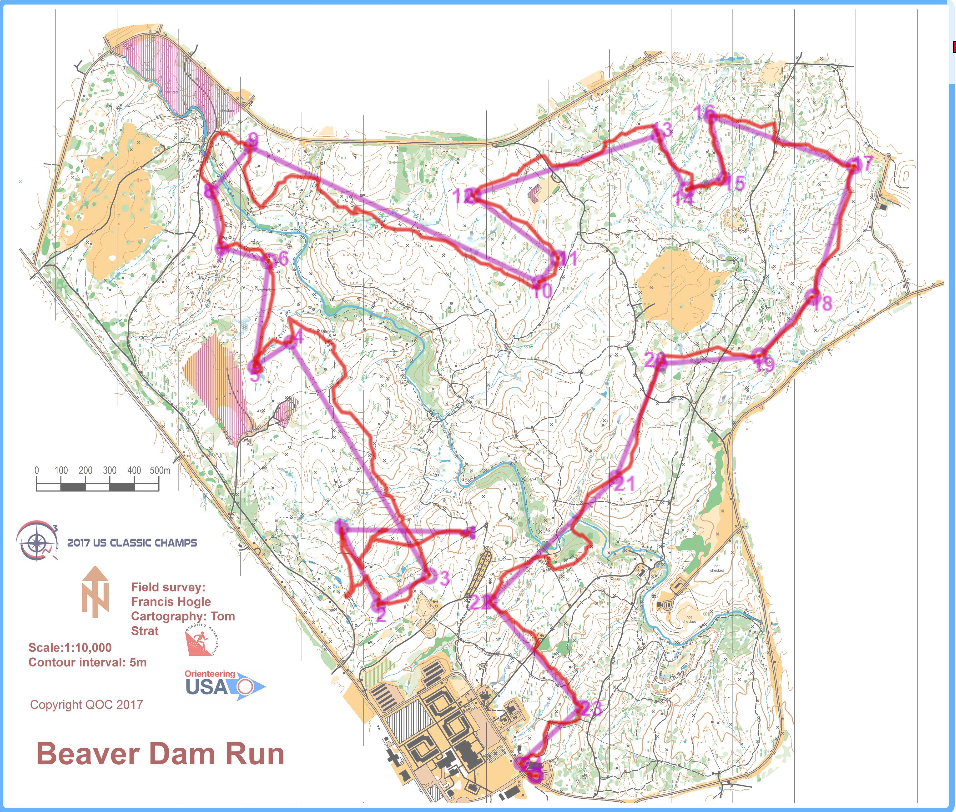 Barely can get home and run in daylight :(