finally giving myself the rest I need to get over this cold?

especially after Oliver had explosive diarrhea 3x overnight, twice indoors because we didn't make it outside in time. Rough night for both of us, but he seems to be a lot better now, while I'm just more and more sick
7 PM

its such a beautiful day, perfect for a chill bike ride or a walk or something like that, but for me it's almost too challenging to go outside with oliver to just let him pee. Hopefully the rest of the week will be just as nice.

Yeah my pace was atrocious but man I was glad I finished the course. I felt horrible, my sore throat made it feel like I was swallowing knives each time I swallowed and it felt like someone was standing on my chest when I was breathing. I couldn't breathe deep, the whole time I was stuck taking shallow breaths so running anywhere else than downhill in white woods/on a trail was pretty much out of the question. Adding in tiredness from yesterday's going all out and the fact that I don't like longs made it suck, but I don't mind too much. I'm glad this race didn't count towards anything and that I still finished. I'm sorry I wasn't able to push harder, but I'm still proud of myself for finishing. The first 4 controls were pretty chill (at least navigation-wise) and the last 4 were pretty fun because we were back in the middle terrain and there were shorter legs. It took me a lot of convincing around 5-12 to not just lay down on a warm rock and take a nap.

I'm still very happy with the races this weekend. Yeah, the Friday sprint sucked for me personally, and the long felt endless, but Saturday's races were worth it. And hey, I still had a clean long, and I made it under 3 hours, so relatively it was a successful attempt. (even though my time is kinda embarassing but oh well) 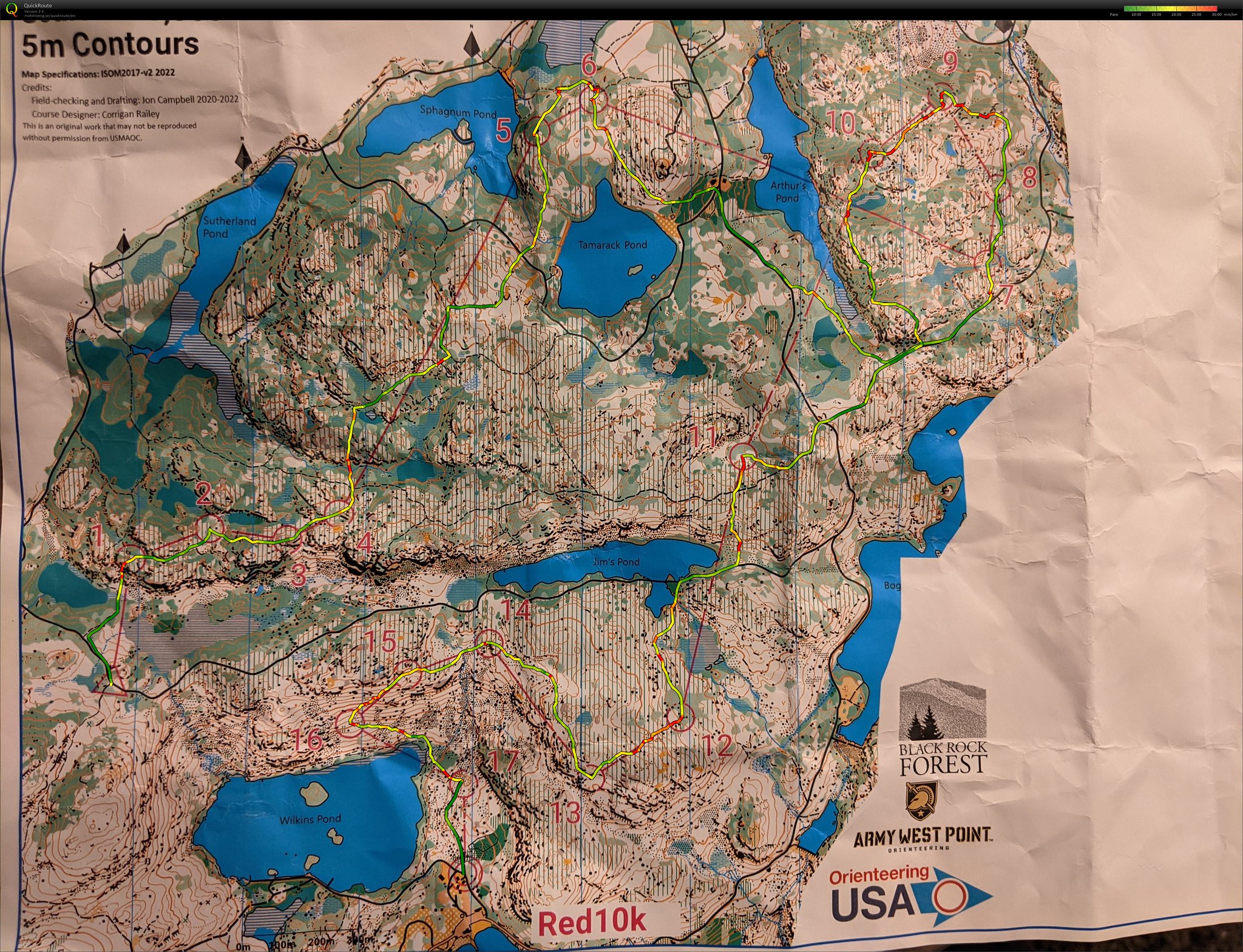 just a plank rotation, had to cheat a lil on the last plank. I'm trying to get back in the habit of doing core regularly, and since it doesn't require too much heavy breathing, I figured why not get it done.
Long - Red - Splits

Woke up this morning with a crazy sore throat and felt like complete crap after yesterday's sprint where I couldn't push myself at all. I honestly was worried on the bus there that I wouldn't be able to breathe enough for running. But oh my god I had a blast on the middle. Middles are my favorite anyways, and it's been so long since I ran a proper middle, and it's been so long since I ran in West Point terrain, I missed it so much. Yeah, I could've definitely been faster in some spots, but minus a few hesitations and unnecessary control checks, I had a clean run (for West Point standards).

I caught up to Matt Smith on #5 (which was the only box that didn't have SI air turned on) and I kept seeing him ahead of me and I was trying so hard to catch up to him. He would make a mistake, like overshooting a control, and I'd catch up, and then he'd run faster than me and pull away, and repeat. Then at the end whe raced eachother in the finish chute which was nice (he beat me because I was right on his heels but didn't have any power left to sprint past him). I haven't gotten to properly race anyone in the finish like this in a while, so it was really fun. I was a bit worried I overdid it on the middle and that I'd be too tired for the sprint, but thankfully that turned out to not be true. 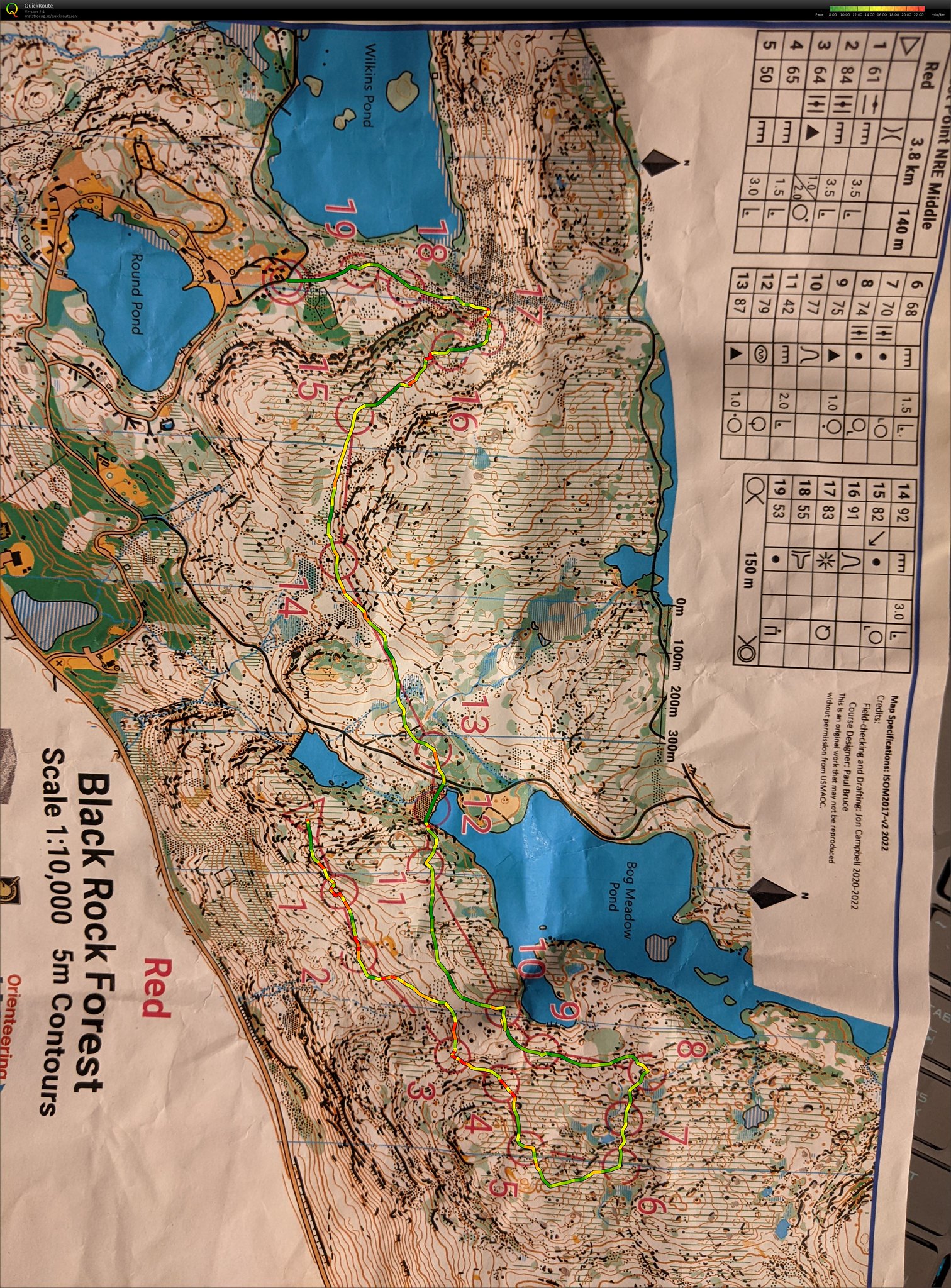 I was so nervous. I thought it was going to be like yesterday's sprint but oh how wrong I was.

I passed Oriana (who started 2 mins before me) on my way to 3 because she went the wrong angle after leaving the road. It was a bit of a shock to me to be running in the woods because I had prepared myself for urban spring orienteering so much that I almost forgot how to navigate in the woods, and I was worried it would be painful because I didn't notice the trails at first. Then, with the trails, it was perfectly fine.

For the rest of the course I was trying my absolute best to stay ahead of Oriana. I know she's a stronger runner than me, and she can last way longer than I can. I was dying up hills and constantly looking over my shoulder to see 1. if I can see her and 2. how quickly she's closing the gap. By 8 I thought she'd blow past me but somehow I apparently kept my lead, all the way into the finish. I noticed that yesterday she beat me on the sprint almost purely because of the last 5 controls, so today I was making extra sure that I kept pushing, even at the end. Honestly, without Oriana there, I don't think I would have been able to run that much, and I don't think I would have enjoyed the sprint so much.

I had a clean race except for one little confusion at 6, but that definitely cost me less than 30 seconds. Other than that I was quadruple checking control descriptions and codes because I knew that with Oriana behind me like that, if I made a single mistake she'd pass me and then I'd lose my motivation and I'd crash, so I was checking every corner if it's on the inside or outside and if the control is above or below. I'm very proud of this sprint, and I think despite my kinda slow pace, it's up there as one of the best sprints I've ran in quite a while. 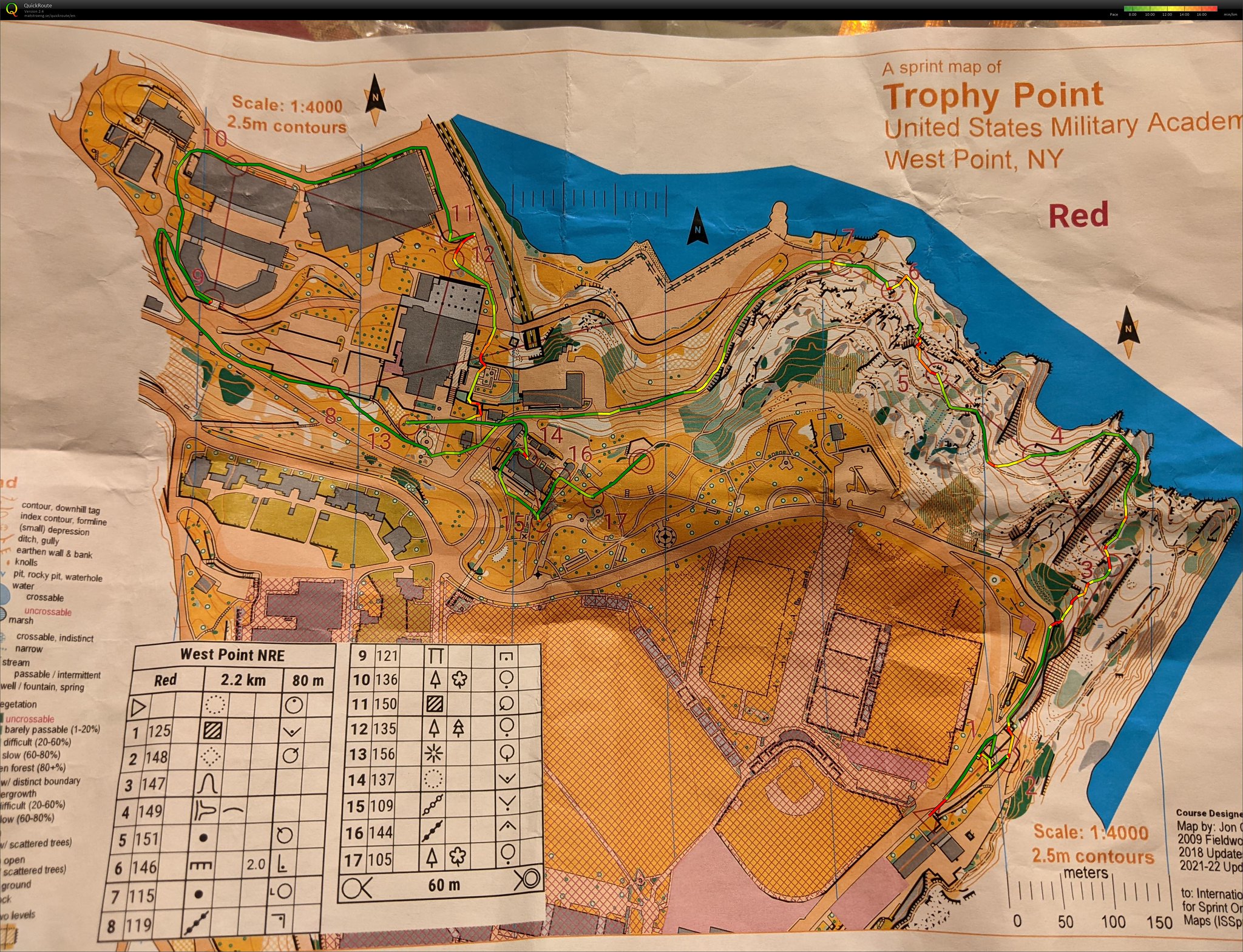 I felt awful. I couldn't push myself at all. Going to #2 I already felt my legs giving out. I know I could've done so much better. I was almost clean, I just screwed up going to 15. I messed up going to the underpass, I didn't bail to the trail but to the road and then I had to run a bit further out to then return to the underpass. Other than that any mistakes were route choice based, like crossing through the steep, green slope by the underpasses twice; once going up, once going down, both because I didn't realize that I can go around and have it much easier.
Physically I wasn't there in the race, and mentally I was just constantly like "I'm a failure and I don't even deserve to be trying out let alone on any team" but I guess fake it till you make it huh 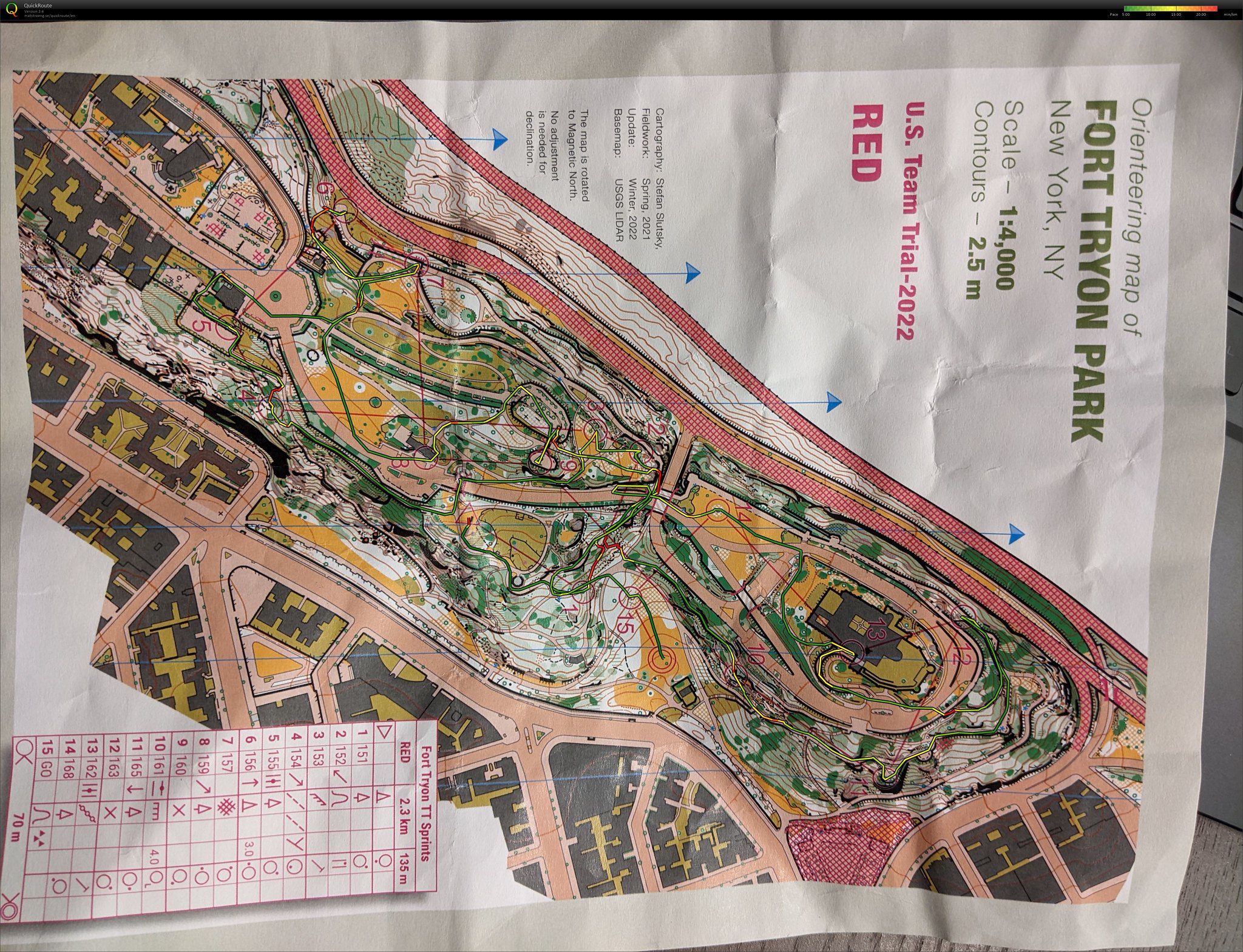 5 min plank rotation then neck stretching stuff.
So turns out the head-splitting headaches I've been getting have been tension headaches caused by stress and tightness in the neck and poor posture so that's fun. Also got bloodwork done today without passing out, so i'll finally get to see my iron levels soon. Although my doctor said it would help to get back on my meds so yeah I'll try I guess. Fun stuff.
C • Woop woop!!! 1

I hate being tired all the time... and I wish I could say it was because I've been training hard, but I haven't been training as hard as I wanted lately, which is so frustrating. I'm going to the doctors tomorrow to get my vaccination updated and to get bloodwork done and I've been having splitting headaches on the right side of me head here and there and I have a bump in the back even though I haven't hit my head on anything recently so yeah. I'm absolutely terrified because I'm going there alone and I'm terrified of needles and tend to pass out during bloodwork and sometimes vaccines so driving back is gonna be not very great. I just want to do good at West Point and enjoy it there but I'm not sure my body is going to let me.
1 PM