We don't have UltraLong solo orienteering races in Canada (nor a Hudson Highlander or Billygoat) so this event was one of the main attractions of the weekend for me. The female elite course was almost as long as Raid The Hammer with a similar number of controls - very fun!

Although I was nervous about it, the map scale turned out to be a non-issue for this course. This event mostly tested route choice, running speed and endurance but the control locations were fairly obvious once you got to the right area - not tiny depressions or low cliffs. I'd expected to need my compass magnifier in addition to my reading glasses but I never did.

Unlike the past two races, things went pretty smoothly except for a minor hiccup on #20 when for some reason, I ran happily toward a rootstock on a spur, knowing full well that I expected to find it in a re-entrant.

I ran 1.5-2 km longer than Joe (we compared notes afterward) to avoid climb but that probably helped to save energy. It was a mass start but as a slow runner, I was by myself most of the way, which I really enjoy. The terrain was gorgeous! 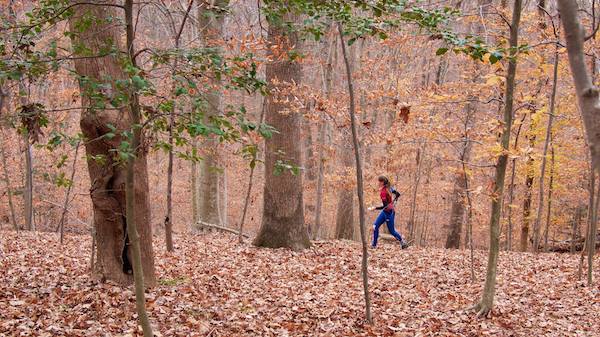 Photo by Aaron Linville - not sure who the runner is

For some reason, falling was my thing today. My toe caught a root within the first half kilometre, and I crashed my ribs and knee into rocks when I went down. A later fall banged the other knee and made my index finger bleed inconveniently onto my compass for 20 minutes. Just to make sure the other side of my body didn't feel left out, my feet slid out as I was descending a steep slope, and as I plummeted to the valley bottom, I smacked my back on a couple of hard objects and filled the back of my shirt with dry leaves like a scarecrow. All very glamorous.

My ranking wasn't anything to write home about, however, there were considerably fewer people on the Red course today and a bunch of DNFs and MPs too. Almost everyone ran in their age category to compete for the U.S. Champs. So I'm much happier than I was with yesterday's disaster. I could have gone a little faster but I was pleased with almost all of my route choices, and that's good enough at this point in the season.

Great job by Jon Torrance, Valerie Meyer and a big team of QOC volunteers. I really enjoyed the weekend - nice to catch up with some orienteering friends. We should get a bunch of Canadians to do a road trip to the next U.S. UltraLong Champs within range of southern Ontario. I think a lot of you would really enjoy it!

The drive home was long and tough compared to the drive down. I had to pull over for two naps, and a snowstorm started within 60 seconds of crossing into Canada and continued for the rest of the way. I got home at 1:40 a.m. Blah.
C • 1:10 4
C • Runner 6
UltraLong Championships - Red - Splits

Run to the start - and then some. Missed seeing a flagged turn-off when I spoke with someone so I ran way down a hill and had to come back up. I was already late because I had missed seeing a turn-off while driving to the race. And I was tired because last night I missed my turn-off on the way to the hotel. That one I saw but Hwy 66 has some weird thing where shoulders are sometimes shoulders and sometimes driving lanes, and cars suddenly appeared to my right so I couldn't exit.

So it turns out bad things *don't* always come in threes. I'm not sure why this was such a bust but maybe my brain was more tired from yesterday than my body. I haven't orienteered much in 2014 but this was ridiculous.

I ran confidently along the spur toward #1, which almost never happens. When I got to the end of the spur, I saw a flag a little to my right. Yay! I checked the code - 75. Nope, I was looking for 77, the code I'd memorized at the start line. I tried to guess which feature this flag could be on, then I ran around like a crazy person trying to make sense of the spur, and it wasn't working at all. Finally, I glanced at my control description sheet to confirm the feature and saw that I really *was* looking for 75. Ugh, almost 8 minutes lost for no reason whatsoever in a Middle Distance. That was a first - and hopefully a last.

Then on my way to #5, I decided to start following features instead of looking at my compass. Don't ask me why I didn't do both simultaneously, especially in terrain where everything looks very similar - re-entrant, spur, re-entrant, spur, re-entrant. So I got up on the wrong spur and had trouble understanding it, not surprisingly. Runners kept appearing where they shouldn't have been so I didn't doubt myself soon enough. I decided to try to make my way back to #4 but I ended up finding #12 instead, which was close to #4. Fantastic, not only was I able to find #5 easily after that, I also knew exactly what #12 looked like.

Things went fine for the next five controls, then I headed back to #12 with supreme confidence. After punching it, I glanced at my map and realized I'd come there from #10 because, hey, who needs to look at a map when you know exactly where you're going?

At #13, I was expecting control code 66 and had a second of angst when I saw a 99 hanging down from the control. Luckily, I figured it out. :) Sheesh, what a day. Pavlina finished in less than half my time, which shows what a world class result would be for someone my age. (Literally. She's won gold at the World Masters Champs.)
Middle - Red - Splits

Model course for Night-O at Oregon Ridge and 400 m climb up a former ski hill to get to the start. Given how cold it was, it was a great way to warm up.

Note to self: Remember to bring small emergency headlamp to point down at the map. I realized my omission too late and had to wear my small backup headlamp along with my BashBlaster for distance lighting. Definitely overkill, not that comfortable and made me look like the Borg. I always remember this for Rogaining but I think I made the same mistake at the U.S. Night-O Champs two years ago!
6 PM


Long - but good - drive to the Washington D.C. area for a weekend of fun orienteering events hosted by QOC.

Tonight was the U.S. Night-O Champs. Since I'm the wrong nationality to race in the championship, and since I'd driven a long way, I raced in the elite category to get a longer course. I certainly got my money's worth! I lost almost 20 minutes on the first 2 controls but after that, things went pretty smoothly.

The first control was a typical, not-quite-focused-enough-yet Control 1 error. I forgot to turn on my Ambit until I was already wandering along a hillside in the dark looking for rootstocks but it looks like I was very close to the right spot in the first place. I ended up circling back to the start triangle since it wasn't that far away, then I had no trouble finding it the second time.

The second control turned into a huge mess! I wanted to build confidence after the first control so I decided to take a safer road route where I hoped to do more running. What I didn't know was that these maps have a different convention than Ontario maps for indicating private property. We use an olive green colour or purple out of bounds lines. I saw a bunch of buildings dispersed on a hillside mapped for orienteering so I was expecting summer camp buildings or the like. Instead I found myself running through a fancy subdivision. WTF?

There was a wooded ravine in the place where I'd planned to leave the road and it looked pretty wild - probably part of the park, I thought. However, a woman called down to ask why I was on her property. I apologized and assured her that I didn't want to be on her property so I went back out to the road and ran a loooong way around to get back to the park another way - over 10 minutes lost. The stupid thing is that later in the race when I was more confident with the map, I would not have considered that route choice. When I looked hard, I saw a grey line that was probably a park boundary (later confirmed by Jon). Not a convention I'm accustomed to, but I know it now!

Otherwise, things went fine, the course was challenging (18 controls on hilly terrain in the dark!), Valerie's results set-up was awesome, and I had lots of fun. So much climbing! Even though I botched it, I wasn't the only one apparently, so I was 3rd of 6 in F-21. I stuck around until most runners were back due to my jury duty, then I missed an exit on my way to the hotel in Fairfax, which was already 80 minutes away. Driving around D.C. is brutal. Long day. Tired. But it's good tired.
C • Sounds like so much fun.... 10
Night Championships - Red - Splits

I still haven't written my UTMB race report; the longer I leave it, the easier it is to leave it even longer! However, 'Bent and I are the keynote speakers at the C3 Annual Banquet next Sat. Nov. 22 in Caledon. I'm busy putting together a Powerpoint presentation that will be my first official race report.

Barrie Shepley suggested that we let our AR friends know in case anyone is interested in coming to the banquet, which is open to the public. We are C3 members, even though most other members are runners or triathletes, since it's the only endurance sport club in our area. We usually attend the banquet - silent auction, celebration of athletic accomplishments, chatting with interesting people, a presentation or two, etc. Apparently, they are only selling tickets until this Thursday night (tomorrow), although I wouldn't be surprised if they could squeeze in an extra person or two after that date. If anyone is interested, it would be great to have a few adventure sport friends to sit with us and smile understandingly while we speak. :) It's going to be more than a little daunting.
http://www.c3online.ca/index.php/events/91-2014-c3...

Rode to Albion Hills since I was finally able to reach the friendly park manager so I could pay for our mountain bike orienteering event. While I was there on such a sunny, warm day, it would have been a shame not to do a little single track before heading home.
C • no kidding! 2

Daylight Saving Time: The Movie. A week late but whatever...