March Highlands - Kanata Lakes. It's been almost two years since my last Canada Cup orienteering race (aka A event) and I sure felt rusty! It didn't bother me since I just wanted some tough nav practice. I'd entered a lower age group with the plan of doing longer courses and avoiding the feeling of being in a competition. It worked. I had a ton of fun in spite of a few bobbles and a slow, cautious approach to this difficult terrain. Congrats to `Bent on beating me!

Tunney's Pasture, Ottawa. Fun sprint through a campus of government buildings. There were a number of tricky spots - uncrossable concrete walls, passageways, staircases, etc. Mostly it went well but I lost time on a few controls. When I compared notes with others afterward, I realized that I wasn't alone! Loads of fun - I love running on the edge, trying to stay in contact with the map while pushing the pace in easy terrain.

The Ottawa club did a terrific job on everything today. Great arenas for both events. The sprint was spectator friendly; James announced us all as we came up the chute. It was great to see so many friends including Pamtastic, my Eco-Endurance Challenge teammate!

Interesting and nervewracking story for event organizers... A racer in a mud run used a friend's bib, thus never signing a waiver nor establishing any other official relationship with event organizers (not that waivers carry much weight in the U.S.) He "jammed" his hands and arms in a mud pit that he was supposed to crawl through and ended up paralyzed. He's suing for $30M + legal costs. Wow. http://www2.timesdispatch.com/news/2012/may/17/tdm...

Rode around Palgrave West single track on my old Gary Fisher Sugar 2. It is such a nimble bike - wish they still made that model. I felt like Spiderwoman climbing hills!
9 AM

You can do the Storm The Trent Trek Elite course in 1:40 through the magic of time lapse photography - cool!

Has anyone ever used a "cooling headband" in hot conditions? Is it a gimmick? Is there a down side? If it works, can you recommend one?

If you're planning to do the Wilderness Traverse 24-30 hr adventure race on Aug. 18-19 but haven't registered yet, the earlybird deadline is tonight. If you'll be racing in Scotland or moving to France - or both - please disregard. ;)

Hockley Loop with Mrs. Gally and Dee. Since they are faster runners, I proposed taking a head start, then we could meet along the way. They were in the parking lot when I left so I'm not sure how much time I had but we met at the 10K mark at the entrance to Anderson Tract, which was perfect. The route is a little tricky through there and there are some super-steep hills that all three of us would be speed hiking anyway.

On the first hilltop on the south side of the loop, I had a brief feeling of nausea. That's unusual for me and I'm not sure what caused it but it was my first hot long run of the season, so I popped a couple of Salt Stick capsules and took a big gulp of water. The feeling didn't return but I'm not confident I figured it out. As much as I don't enjoy heat, I'll need to acclimatize before the Death Race so I'll need to get out on a lot of other days like this.

Other than that, I felt pretty good - especially considering all the racing I've been doing. It blows my mind that I did the loop 20 minutes faster last spring, which seems totally out of reach now.

Great conversation with friends, beautiful spring greenery and a delicious lunch at the Black Birch afterward made this an A+ training session. 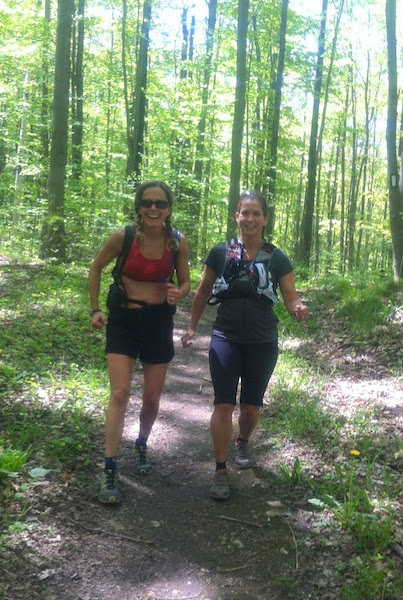 This is my last long run before the Sulphur Springs 50K in 11 days. Since the start of May, I've felt like I've been swept into the current of my ultra plans, and the water is moving faster and approaching a steep-sided canyon full of rapids! (That analogy is for you, Urthbuoy.) But it's all good. I viewed the Eco-Endurance Challenge as ultra training (70+ km) and that was three weeks before Sulphur Springs. After the 50K, I have three weeks until the Mohican 50-miler, then six weeks until the Canadian Death Race. It's all going to happen so quickly!
C • fun day thanks! 2

FunRun came over for a running video session with 'Bent and me. We filmed from different angles using cameras on bikes as well as from a single point of view. The boys have some fine tuning to do but I really need to throw my shoulders back and feel that imaginary "string" pulling my head up toward the sky. I'm not leaning forward from the waist as much as I used to but I still tend to hunch forward just from the shoulders up. On the bright side, apparently I don't heel strike as much as I thought I did. Interesting exercise!
C • Shoulders 4
C • Running Form 7