I was very excited about the trials after my twelve hour trip to Charlotte to attend Andrés' wedding rehearsal dinner and a decent night of sleep. Giacomo and I left Boston at about 9:30, and arrived at the event site with a comfortable hour and a half before our starts. I walked around the permissible areas and scoped out what I could about the terrain. I warmed up for twenty minutes, took a Gu, and read a few 1:5k forest maps, trying to warm up my brain. I had one of the last starts at 3:48, and the day was warm and humid.

The controls were basically where I anticipated them. I had very little zip in my running; I felt sluggish. I can't explain the cause - allergies were a problem for me the entire weekend, so perhaps my breathing was impaired? I stayed on top of my navigation, read my codes well in advance, but I couldn't make up for my slowness. My only mistake of note was a poor line into 14; I had to slow fighting through the green. Today was an incredibly disappointing way to start the trials.

I strongly dislike getting the aglets of my shoelaces caught in the wheels of rolly chairs.

The soundtrack for the next Superman movie shows considerable promise; consider the first track.

Behold the majesty, Adamski at Tiomila. He is wearing his battle face. 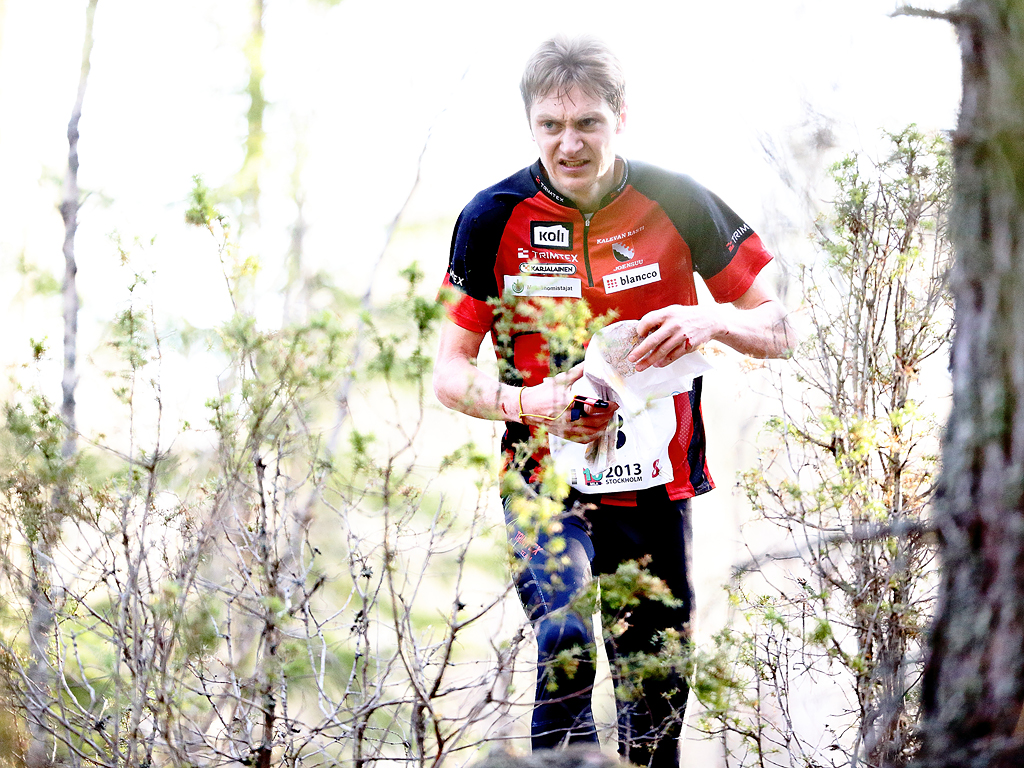 Running warmup. My right hamstring felt a bit stiff, and my left calf was tight. Anna and I discussed goals for the run today on the drive over; I decided that I wanted to plan in advance, execute cleanly, and leave the controls well. My body is a bit tired after three hard-ish runs in the past four days, so I figured on a more ginger effort than typical.

I thought of this as one last rehearsal at slow tempo to make sure all my technique was lining up before the performance etc.

Giovanni's red course at Lynn Woods, which he asserted was a "middle distance." Listed course length: 6.3 km. I guess Thierry could do it in 35?

I started fairly gingerly - reading the map well, cruising physically. My route to 3 could have been improved; I think the best route with the green as is mapped is to run right to the trail and bust into the control from the west. Brendan, who started a few minutes behind me, caught up to me at 4, and I picked up the pace a bit. I ran low to 5, which apparently was a bad route choice compared to going straight and high.

I relaxed a bit on 6-8, just cruising. Six surprised me; I guess I didn't read the content of the circle very well. Boulders were not useful, as they are undermapped and most are not distinctive. Contours and water features were best; bare rock could be useful, but was often mapped as a clearing. I stopped a bit short of six before seeing it.

Nine and ten were solid, and I was surprised to see Brendan relocate at 10 and come into the control behind me. I focused on running my plan and not being affected by him. I was stymied by a circularly mapped rock pillar in front of 11, and Brendan caught up. We busted down to 12, but he was cruising faster. I settled on the trail to 13, and it became apparent he was running straight.

My attack into 13 wasn't great, but good visibility and the prominent bare hillside mitigated it. Controls 14-16 were clean, and I executed my trail route to 17 fine. All the controls at the end were fine - a few seconds hesitation here and there, but the flags were always where I expected them. A good clean day, if a bit reserved. AP thinks I only lost time on 5 (bad rc), but I definitely shed about 20s at 6 and 11.