February race? 3 hours from home? Count us in! Got an airbnb for both nights about an hour north of the race. Now that normal schedule means getting up at 5am, its pretty easy to do that on race mornings too. Made the rest of the trip Saturday morning to check in at 7. The Fork in the Road cafe was brand spanking new, and sparkling, probably takes the cake as the prettiest race venue I've been to. Picked up the tracker and the maps and set to planning with the goal of minimizing climb, as always. Unfortunately, it was set really well, so there were no "good" options to avoid climb. We did prioritize the embedded Orienteering course in the early part of the day, because it came with a $50 prize, although competition was pretty stiff.

At 8am it was off to the races in a balmy 15F, although the sun was shining. Followed the herd to the first control, 31 on a cool suspension bridge, and then down to 84 in a dense thicket of rhododendren. Picked up 75 on the way to 200, which was the 10 control embedded O course. The map was entirely solid green, but fortunately it was easy to travel on ATV trails and rides that were not terrible. Still rather thick for orienteering though. Saw lots of teams out on the course, but we must have been chasing them down because we ended up coming in third by the end of the day. The next section of the race was through the developed part of the Summit Bechtel Reserve, which included areas for shooting, climbing, zip lining, mountain biking and just about everything else you can imagine. (this is now home to the Boy Scout national Jamboree, every 4 years, and a high adventure camp on the off years - its a little fancier than the Jamboree i went to 2005.)

Once we headed south from 35 it became more rugged terrain, and the whole day we really didnt feel like we had much oomph and generally felt like we were traveling rather slowly. The climbs were steep and slow going, the downhills were steep and slow going, and many of the trails were pretty rough, so it was difficult to run with any speed, although we did trot. We stopped for water between 33 and 72 because it was the only option, which was a good call because I did run out with about an hour left, but was able to borrow from sydney. We had one minor hiccup on 95, thinking it was much lower on the spur than it ended up being, but we werent the only ones wandering there, ~ 15 minutes lost.

We had made 1 hr, 2-2.5 time estimates and by this time we had used up our 30 minute margin, but decided to keep plugging to see if we could make up any time. Unfortunately, that didnt happen, so as we rounded the S part and started heading back N towards the finish, we started evaluating options to drop. We first dropped 44 with about 3 hours to go, because it was a low pointer, and hoped that would get us back on schedule. It helped, and we decided the final decision point would be at 93 where we could head straight back, or get a few more points. Around hour 8 we perked up a little and were moving faster than we had most of the day, but it wasn't quite enough - we decided to drop the huge climb for 91, which was a big loss of points, but was able to replace it with an easy 54 right at the end.

Despite feeling sluggish, we were amazed to discover we had traveled ~30 miles and 6000 ft of climb, which was about 7 miles farther than last years race (a little less climb). We were even more surprised to find out we came in 3rd because the field seemed pretty loaded. The long runs are definitely paying off! I think another major part of the farther than expected distance is I felt good the whole time, which meant i wasnt asking for breaks or dragging my feet. I've think I've finally figured out my nutrition problems, because this is 3 races in a row I've held it together. The key for me is lots of salty (and crunchy) snacks (pretzles, PB crackers) and less sweet/mushy stuff (I only ate 1 gu).

I'm really happy to have such a great race partner (who nav'd the entire time). It was really nice to have a heated lodge for post race, and the post-race food was the best I've had - burgers, french fries, soup, and a bunch of other things. (the french fries were amazing).

Thanks to Mark and Lora for the February excuse to be training and get outside! 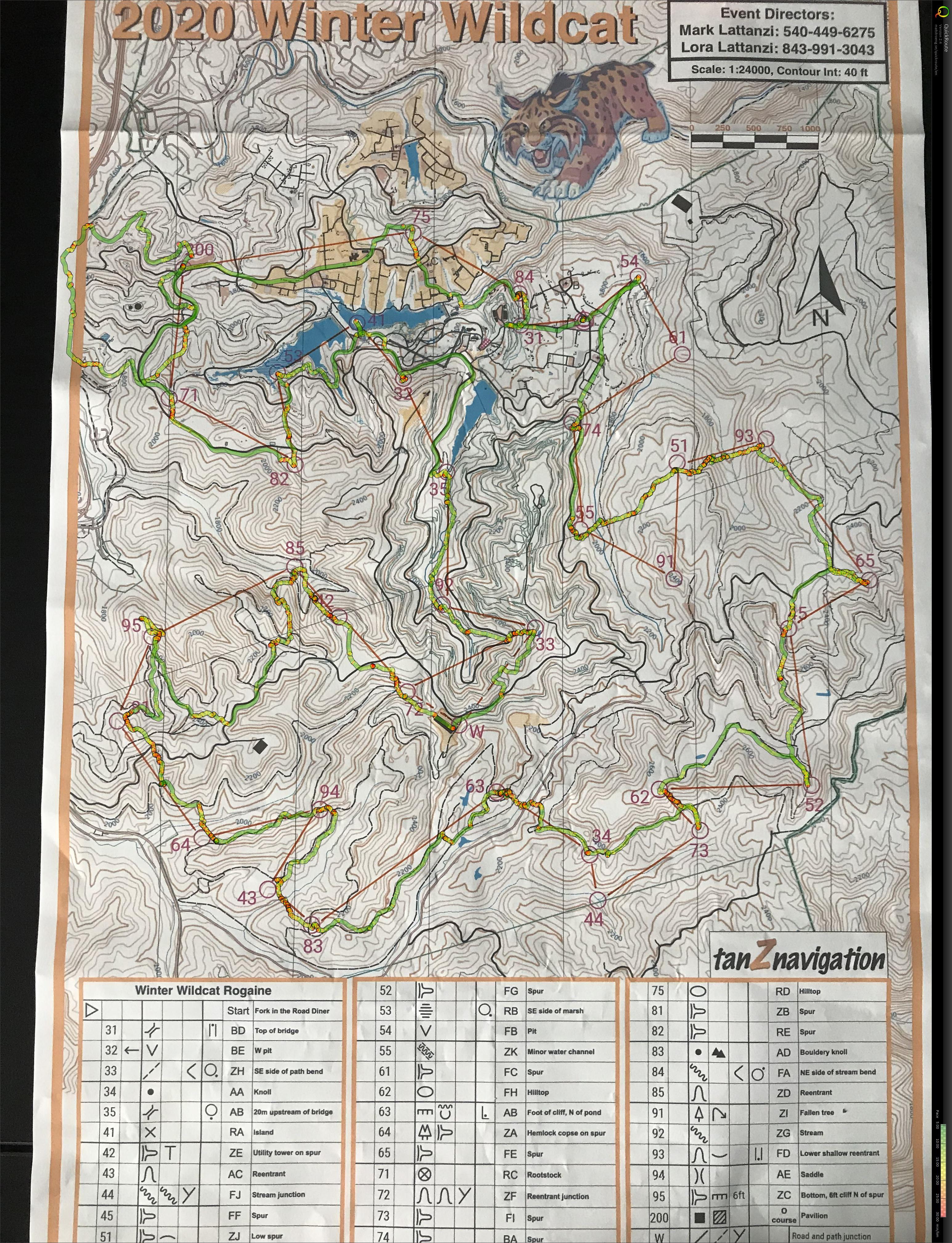 Some fun short speed intervals. They felt good, surprised at how fast they needed up being

Some good progress on a few harder v2-4, hopefully I can finish them next time