May 1, 2022 2:46 PM #
jlwolfe:
Results of the 3BC are now available at 3BC results This page also has links to splits and to RouteGadget.

Thanks to all of you who came out to give this event a try.
Advertisement
May 1, 2022 2:57 PM #
JanetT:
Thank you for making the map and putting on the event! Everything was well presented and the perfect weather was icing on the cake.

Interesting features to visit, too! Enjoyed stopping by #45, and seeing the boulder field near #86.

Having such a large area of state forest available on a ridgetop with very little elevation change in the Laurel Highlands was a bonus; I logged less than 1000' of climb on a route of 11.5 miles.
May 1, 2022 11:40 PM #
Mr Wonderful:
Re: flat, winner was <600 m in 19 miles, less than half of his Raccoongaine climb of similar distance. In contrast, Sunday's blue at GNC, less than 8 miles, was around 450 m.

My RG here, with the 3 I missed drawn in: 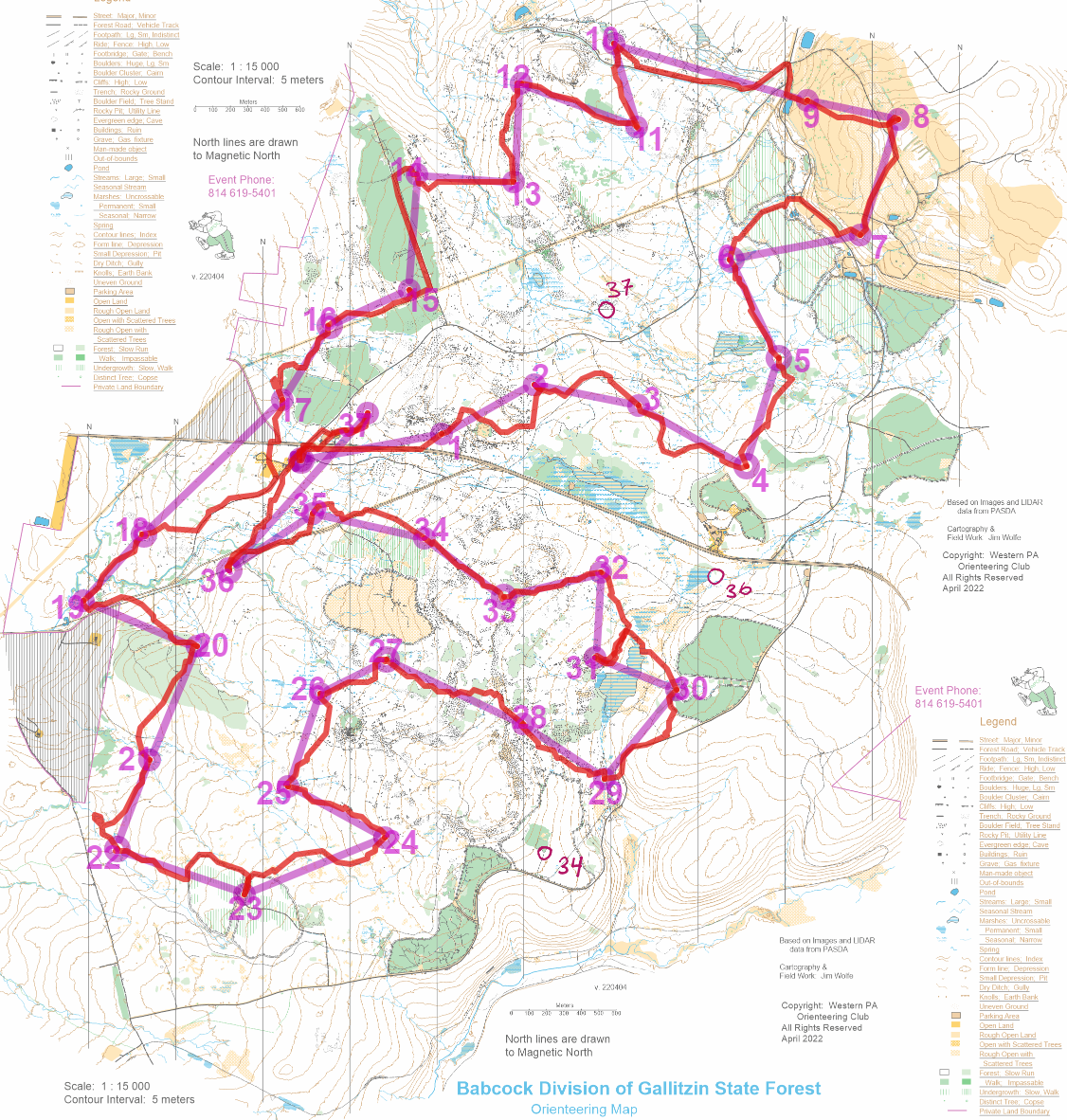 May 3, 2022 9:16 AM #
gordhun:
Nice, nice, nice. Nice terrain, Nice looking map and courses, In the photos nice job of matching up the photos with the map snippets.
But one question after looking through the photos and no offence meant to those who were there- Where are all the young people? Is that something happening generally across recreational orienteering and rogaine events- the 20-somethings are not showing up?
May 3, 2022 11:01 AM #
JBoyer:
This one has the makings of a classic annual event. The route finding was tricky and features were pretty indistinct. It was hard to use boulder features, and even trails vanished in boulder fields and bogs in many places. I ran it counter clockwise south loop first then north. On pace to clear it but had a couple gaffes near the end and ran out of time for the last 3.

I can only imagine the challenge of mapping this park and how to classify the many variations of rocks and boulders. I would say this one not beginner friendly, which is how it was billed and maybe why not as many younger people there. Only thing I would change is the name-it’s deserving of something a little more memorable than 3BC perhaps. (-:
May 3, 2022 9:25 PM #
jlwolfe:
3BC is just the short form for Babcock Bog & Boulder Challenge. I think the long form of the name is very descriptive of the event. :-)
May 3, 2022 11:54 PM #
sherpes:
Gord, young people don't find orienteering interesting. Lots of issues. My kids, now young adults, do not do orienteering. Even here in the city they will not stroll down the streets with retail shops where old people are found shopping. Boomers is now a pejorative term. Also, the remote location requires the usage of a personal transportation vehicle, and that is something that the young adult generation living in the cities sometimes does not possess (and so they use ZipCar...) But you see where I am going? if you want young people nowadays, it will have to be in large urban areas, with mass transit, with entertainment and socializing options. Orienteering is a non-social recreational sport, in which it is mostly an individual activity. It is really for a small nice, with a small intersection of circles in a Venn diagram: must be of an analytical personality that prides on precision of execution, must be somewhat athletic, must be somewhat unafraid of the wild outdoors, must be enabled to reach remote locations away from large urban centers, must accept the possibility of doing this activity alone aka solitaire. So you are talking about 1 percent of 1 percent of 1 percent of 1 percent. Result: only 5 young adults < 30 years age will show up. Hope that helps.
May 4, 2022 2:04 AM #
gordhun:
Sherpes I'd like to say you hit the nail on the head for why young people are not coming orienteering but I'm afraid that in my opinion you only struck a glancing blow.
Triathlons, Mud runs, Spartan races, Adventure races all take part in remote, away from urban, settings and all attract the 20 and 30 somethings as their largest demographics (age groups). Where you are bang on is about the entertainment and socializing options missing at today's orienteering events but are large parts of all those other activities.
It is dangerous to talk about back in the day but when I started orienteering we all were invited to bring picnics, to sit around after our run and get in informal groups to talk about how we ran or where we ran. There was always good laughs, good learning and good friendship. By coincidence recently I have been to a couple of events hosted by that same first club. There was a good turnout for the race and then we all went home.
You know if I were coming to my first event and everyone went home as soon as they finished I'd say to myself what's the point? It can't be a club unless there is some club camaraderie. I'm going to look for my fun somewhere else. The saving thing for that club these days is they have regular running and technique training on different evenings of the week and apparently those are much more social occasions.
There is nothing essentially unattractive about orienteering. It is not only for the .01% of the population, But just like every other activity does, we have to dress it up a bit. Be welcoming at the welcome, provide fanfare and the social occasion when our 'customers' finish, encourage socializing. Ask even the newcomers to do something to help, even just pick up a few markers.
And for Pete's sake find some place to write up the event featuring the results and get in lots of names. People like to see their names in print or on-line and they LOVE to see their kids names in print or on-line.
Make them happy, involved and appreciated and those young people and their friends will be back and many will be ready to help.
May 4, 2022 4:41 PM #
eldersmith:
The race was wonderful! I certainly hope it becomes an annual event, for many of the same reasons that others have mentioned above.

Addressing Gord's comment about the social aspect of orienteering, one of the things that these mini-rogaine events provide that are nicer that way than most standard orienteering events is a mass start, a finishing time that is nominally the same for all participants, and food at the end which helps ensure that most of the competitors hang around for a while after the race. It even seemed that pretty much everyone was still around for the awards ceremony about fifteen minutes after this race!

One thing, though, that is very different from the Triathlons, Mud runs, Spartan races that Gord mentions is that most of the duration of the race you are pretty much alone in this type of orienteering event, whereas there are tons of other people right around you, reminding you continually that you are being competitive and giving you a chance to be a bit of a show-off to impress the people near you. If a lot of the people who love the doing stuff without a crowd around are enjoying it partly because they are a bit introverted, it may not be surprising that they don't provide as good an effort at the publicity and advertising that may be necessary to draw a big crowd in the modern era.
May 4, 2022 5:06 PM #
jlwolfe:
Course Setter's Analysis:
One of my goals was to make route choice not obvious. Judging by two things, I think I succeeded. 1) Looking at the participant's routes in RouteGadget, even the two people who came closest to clearing the course had significantly different routes. 2) Beginning and ending controls were very different. With only 33 teams, eight different controls were the first ones visited. Some of these were also last controls - these were the controls near the start/finish; some teams got them on the way out and some on the way back; this was to be expected. However in addition to those, there were eight other controls that were also last controls for some teams. A few of these clearly reflected running out of time or weak planning (for example when #86 or #75 or #38 or #64 were last controls); but the others I think were route choice decisions.

I also did a frequency count of control visits. Naturally, the controls closest to the start/finish were among the most visited. However, I was kind of amazed to see that control #64 was the most visited of all (24 teams visited it). The least visited control was not a surprise - #34 with only 2 teams visiting. Most teams probably regarded it as too far out of the way for the point value. I struggled with deciding where to place that control. I probably should have used a feature about 500 m NW of where I did put it. That would have made it more attractive to people visiting #85 and/or #86. I didn't do that because of the large boulder fields between those two controls; but judging by the routes people actually used, I should have moved it. Other controls with relatively low numbers of visits were #39, #43, #44. and #55 (each with 8 or 9 visits). I regarded controls #85 and #86 among the most difficult (the reason for their high point values); but I was pleased to see that each of these had 13 teams visit.

If you are curious about other controls, go to Control Visits

Please login to add a message.